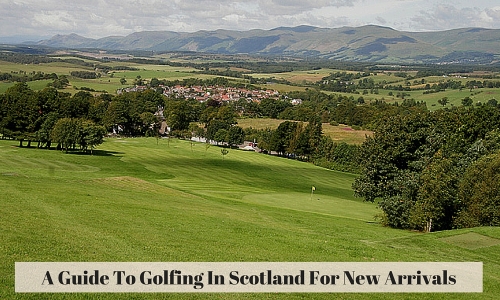 Scotland is universally acknowledged as the home of golf – the game that is now played around the world began here in the 15th century. There are written records of the word ‘golf’ as early as March 1457 in an act of Scots Parliament. James II banned both football and golf because his troops spent more time practising these sports rather than archery, which he would have liked them to do.These bans stayed in place for nearly 50 years until the Treaty of Glasgow was enacted in 1502, when the ban was lifted because James IV was an avid golfer himself.

It isn’t just the first mention of golf that can be traced back to Scotland. The first set of written rules were formulated here, the structures for tournaments originated here, the game as it is known today spread from Scotland across the world. The oldest playing golf course in the world is claimed to be the Old Links at Musselburgh Racecourse in East Lothian, Scotland. There is documentary evidence to prove that golf was played here as far back as 1672. However, it is also claimed that Mary, Queen of Scots, played golf at this 9-hole course in 1567. Mary also played golf during her time in France and helped popularise the sport further. The Royal Musselburgh Golf Club was then founded at the racecourse in 1774.

The earliest golf courses were built on links land, which describes soil-covered sand dunes that are situated directly inland from a beach. These parcels of land were the “link” between the sea and arable land. It should also be remembered that not all seaside courses are links courses. The term ‘golf links’ was created to describe coastal courses that were built on naturally sandy soil. In the 15th century, the game used to be played on an 11-hole course at St Andrews. The holes were played in order and then played out again to complete a game of 22 holes. By 1764, the number of holes was reduced to 9, and the first standard 18-hole course in the world was created at St Andrews in 1764. Today, the Old Course at the St Andrews Links (one of seven courses at the Links) is considered the home of golf and is also the seat of the Royal and Ancient Golf Club of St Andrews. This is perhaps the most prestigious golf club in the world and one of the governing bodies for the sport.

When James VI came to power in 1603, a number of Scotsmen came to London and began playing the game on Blackheath, the hill behind Greenwich Palace which was the residence of the king. The Royal Blackheath Golf Club, the oldest golf club in England, has its foundations in these players. The popularity of the sport steadily increased across the world to become a serious sport and a multi-billion dollar industry.

The most unique thing about playing golf in Scotland is the courses themselves. Links golf is considered to be the traditional way of playing the game. Not every single course in Scotland is a links course – there are many parkland, heathland and seaside courses as well. It is also possible to play a course that is part parkland and part links. However, true links courses are the reason that millions of golf enthusiasts make the pilgrimage to Scotland each year – to play the game in the purest way possible, in a terrain where the weather is a strong opponent.

Due to its long and illustrious history in Scotland, the game has become entrenched in the national consciousness and is an integral part of the Scottish cultural identity. Many of the most famous and finest golfers in the world are Scottish including Old Tom Morris, Young Tom Morris, Stephen Gallacher and Sam Torrance. Scotland is also home to what can arguably be called the most prestigious golf major championship in the world – the Open Championship. It is the oldest golf major and is the only one outside of the United States.

While the game is sometimes seen as an elitist sport, it can be both affordable and accessible in Scotland. There are over 500 courses there, some of which are amongst the finest in the world. Most of the courses are open to the general public, although some are attached to private clubs. Council-run golf courses are the cheapest and are spread across the country.
Scotland has the highest number of golfers per capita anywhere in the world.

The Scottish Golf Union oversees over 600 clubs in the country and has more than 600,000 members. It is also responsible for executing amateur championships and managing the national team. The golfing season in Scotland begins in early April and lasts until October. Depending on the weather, courses may start earlier than April in some years. The best weather for golf is usually between May and September.

The economic importance of golf in Scotland cannot be underestimated. A study by KPMG in 2013 revealed that the golf industry was worth more than £1 billion in Scotland alone. It was also found that golf directly contributes £498 million to Scotland’s GDP, which is about 0.4% of the total economic output. More than 20,000 people in Scotland making their living from golf – 1 in every 125 jobs is in the golf industry.

New arrivals in Scotland, whether they are amateur or skilled golfers, will find something to suit their tastes, budgets and itineraries. There are many world-famous courses including the Old Course at St Andrews, the Balcomie Links, the Royal Troon Golf Club, the Carnoustie Golf Links, the Muirfield course, the Prestwick Golf Club and the Gleneagles Golf Course. There are many lesser-known “hidden gems”; these include the Nairn Golf Course, the Brora Golf Club, the Panmure Golf Club and the Queen’s Course at Gleneagles.

It is relatively easy to play at a good course because most of them are open to the public. But remember that some courses are private clubs and for the more upscale and well-known ones, it is advisable to book tee times as much in advance as possible as they may have very long waiting lists. Some courses may require booking up to a year in advance. Some clubs may also not allow amateur players to book tee times. To avoid this situation, it is a good idea to carry a letter outlining your skill levels from your golf club in your home country if you want to play at these courses.

Here are some of the Scottish golf courses that new arrivals in Scotland should not miss.

The Old Course: Known as the home of golf, this is an unmissable course for any golfer. The Old Course is one of seven courses at St Andrews. The 18-hole, 6566 yard, par-72 course has been the site of many history-making moments including when Tiger Woods became the youngest player ever to complete a grand slam in the year 2000. The Old Course is also home to The Open Championship and has hosted the tournament 29 times since 1873. The Open returns to St Andrews every 5 years.

The double greens at Old Course are amongst its most unique features; the 700-year-old Swilken Bridge at the 18th hole has a particularly iconic status in golf history. Many famous golfers have taken their farewell photos standing on this bridge. As you would expect, tee times at a course as old and hallowed as this are hard to obtain and are often booked out up to a year in advance. It is a good idea to book as soon as possible. There are other ways to book tee times as well – for example the Old Course ballot, or tours like the Old Course Experience and the Winter Package. The staff at Old Course will also do their best to accommodate single golfers on the day of play with an existing two or three-ball group. Depending on the season, the greens fees range between £80 and £175.

The Carnoustie Golf Links: Situated in Angus, these links consists of three full courses and a junior course, and are open to the public every day of the week. Courses here include the Championship Course, the Burnside Course, Buddon Links and the new 6-hole junior course, the Nestie. The original Championship course was extended to 18 holes in 1872 by Old Tom Morris and was rebunkered in the 1920s by another golfing great, James Braid. Like the Old Course, the 6,941-yard Championship course has been witness to many great moments in golf history, including the French golfer Jean Van de Velde struggling in the Barry Burn during the 1999 Open Championship.

Carnoustie has also hosted many famous tournaments including the Alfred Dunhill Links Championship and will host the Open Championship again in 2018. The greens fees, depending on the season and the course, range from £80 to £185. Using a caddie is recommended at this course, not just for the convenience but also because most caddies have worked at the course a long time and will be able to share a lot of the trivia and the history of the course. Caddie services should be booked at least 24 hours in advance. Tee times can be booked online and the handicap limit is 28 for men and 36 for women. The booking confirmation and handicap certificate must be presented at the course or you may not be allowed play.

The Loch Lomond Golf Course: This 7100 yard, 18-hole course hosts the Scottish Open, which is held a week before the Open Championship each year. The course was designed by Tom Weiskopf and Jay Morrish and is located on the shores of Loch Lomond in Luss, Scotland. Each hole in the course (except the second and the fourth) is isolated from the others. It is a challenging course, one in which a golfer will possibly use every single club in the bag. There is also a large amount of architectural history around the course. It is said that Mary Queen of Scots, visited Rossdhu Castle, the ruins of which can be seen from 18th green, on two occasions. The Loch Lomond Golf Course is a private club and you can only play here if you are accompanied by a member.

The Nairn Golf Club: This golf course is a gem hidden amongst the Highlands of Scotland in the town of Nairn, laid out along the shores of the Moray Firth. It is acknowledged as one of the best links courses in the country with firm, fast and narrow fairways. Established in 1887, it is a private club consisting of an 18-hole championship course and the 9-hole Cameron course.

One of the unique features of this course is that every hole affords players a sea view. Nairn has hosted many tournaments including the Walker Cup, the Jacques Léglise Trophy and the Curtis Cup. Visitors are welcome to play at the Nairn courses and tee times should be booked in advance. Full payment of the greens fee is expected 3 weeks before the booking date and can be made by credit card, bank transfer or cheque. The greens fees, depending on season, range between £50 and £180. The day ticket for the Cameron course from November to March is £20. A handicap certificate is mandatory to be allowed to play at the course. Like most golf courses, Nairn has a dress code for both the club house and the course. Jeans and sweatshirts are strictly not allowed.

What’s your favourite golf course in Scotland? Let us know in the comments!