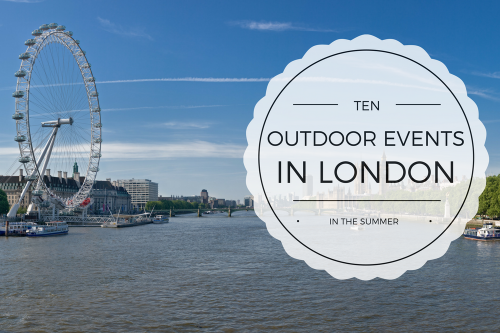 London is an expat hotspot for many reasons. It is a city filled with opportunities and in spite of the predominantly cold, wet weather, expats continue to flock to its shores either for personal or professional purposes. The city, with its rich and long historical tradition, has a multicultural society that makes it easy to fit in.London is home to some of the most beautiful architecture, art shows, musical concerts, the best in theatre and expansive city parks. Food is also a marked feature of this bustling city, and London has some of the best restaurants in the world.

Summer is the high point of the year in London. The longer days allow for more sunshine and Londoners leap at the chance to spend more time outdoors, making a beeline to pavement cafés and parks. Central London can feel especially warm when the temperatures reach their height, and there can be warm stretches of clear days lasting for three to four weeks or more. September is the time when summer starts to fade and autumn begins to set in. The weather continues to remain pleasant though, and many summer activities and events continue right up to the end of the month.

Here are ten outdoor activities you might want to try if you’re in London.

A landmark of the city and a regular feature of London summers is the award-winning Regent’s Park Open Air Theatre. Held in the spectacular surroundings of one of the London’s famous Royal Parks, this event serves as a cultural hub. The park has one of the largest auditoria in the city, located in the Inner Circle of the park, with a capacity to seat 1,250 people. Despite this, it still manages to retain an intimate environment where theatre-lovers can gather for some summer entertainment.

In addition to the great atmosphere, the Open Air Theatre also features excellent storytelling, showcasing interesting productions with impressive dramatic credentials. The productions draw crowds of nearly 140,000 people who come for the four annual productions held between May and September. Some of the past productions include Lord of the Flies, Running Wild, and Henry V. The Open Air Theatre will be staging Pride and Prejudice in September. Tickets can be booked online without any booking fee.

A summer filled with festivals, culture and music is what the London Bridge City Summer Festival promises. It begins on the 1st of June and continues till September. Dance, musical performances, theatre, movies and plenty more can all be enjoyed for free at the festival. The activities are held at various locations from Tower Bridge to London Bridge. Live music events are held five nights a week. The London Bridge, an iconic landmark of the city, is transformed into a summer celebration that also features some exciting food and drink. There are even DJ sessions, fitness classes, dance classes and street performances.

September will feature ‘The Wawel Dragon’, a staging of Poland’s iconic myth about the clever and daring folk who took on the dragon that lurks beneath Wawel Castle. This is to celebrate the European community living in the London, and is held in collaboration with Polish theatre-maker Nastazja Domaradzka. The schedule for the evening features a rock musical based on Crime & Punishment, one of literature’s most influential novels. The production will incorporate rock music inspired by the youthfulness and intensity of the novel.

The Serpentine Galleries are two galleries located on either side of the Serpentine Lake in Kensington Gardens. Eight shows are held throughout the year, as well as an annual Serpentine Pavilion in the summer. This is an architecture program featuring a range of outdoor sculpture projects, artist commissions, digital commissions and educational programs. The pavilion stands next to the gallery building and is composed of hollow rectangular tubes of fiberglass sheets, stacked in the shape of a twisting sculpture. Designed to surprise, the pieces look like bricks, but are light, and although they appear as curves, they are right angled with straight edges. Observing the monument in certain positions provides glimpses into the greenery beyond.

Also on display are four ‘summer houses’, one of which is an arrangement of wire circles into six-sided forms which have been placed in such a way as to form a light, three-dimensional grid. The annual installations have had the participation of renowned architects such as Zaha Hadid and Frank Gehry. The installations have always emphasized interaction with the user, so that visitors do not remain passive observers. This is what makes it an interesting activity for art and architecture lovers.

London’s best beer gardens come alive during the summer. From riverside locations to barbecues, these beer gardens are located across the north, south, east and west of the city. One of the most popular ones is The Albion, located between Upper Street and the Caledonian Road. With an old-world charm, this Georgian pub’s location is away from the main thoroughfares and hence blissfully free of the sounds of traffic. It has a walled beer garden, with three options on beer. There are also summer cocktails and a wine list. Summer is also the time when The Albion has barbecues.

The Edinboro Castle is another pub with one of London’s best beer gardens. Located in Camden, this outdoor beer garden in the summer months is a haven away from the noise of Camden High Street. Full of sunshine and shaded by trees, there is a range of ale to choose from, along with barbecues and hog roasts.

Held from May to September, the London Wonderground festival is one of the most popular alternative acts on the scene. It takes place at the Southbank Centre and is now in its fifth year. Curiously quirky, the show includes comedy acts, cabarets, circus and children’s shows. All the shows occur at the beautiful 1920s Paradiso Spiegeltent, circular mirrored tents that lend a unique atmosphere to the events. On till the end of September, is the daring and extravagant cabaret show featuring daredevil stunts, tricks and entertainment. There is also the award-winning contemporary burlesque show and an acclaimed stand-up comedy show. There are also events for the family such as a dance performance for kids below the age of five and their parents. Another favorite with children is the magic show with Victorian magic tricks.

Not officially an outdoor event, but still a must-do, is the tour of the official London residence of the Queen, Buckingham Palace. It takes place only between July to September, and therefore makes a great summer activity. The Palace is among the few working royal palaces in the world and expats should not miss the opportunity to explore the lavish State Rooms, which showcase the treasures of the Royal Collection. There are paintings by the likes of Rembrandt and Vermeer, sculptures, and exquisite porcelain. The palace also has some of the finest furniture in the world. Each year the palace has a limited edition exhibition. Since the tour is highly popular, it’s a good idea to book tickets in advance.

The month-long Totally Thames festival held in September has about 150 events taking place along the 42-mile stretch. It is a celebration of the river and hosts river events as well as art and cultural activities. Last year’s attendance was up to 2.6 million people, as the event is promoted nationally and internationally. The festival has the endorsement of the Mayor of London, Port of London Authority and Arts Council England. The Thames Festival Trust organizes the event, and has been doing so for the past 17 years. It has also organized other premier events such as the Queen’s Diamond Jubilee Pageant.

At the festival, visitors can enjoy the large-scale art installations along the riverbanks. There are also exhibitions and live performances. A unique experience is the concert that takes place below sea level in the Tower Bridge’s Bascule Chambers. Since it is a celebration of the Thames, there is even an archaeological tour of the river’s surroundings. Visitors can also take boat trips or go kayaking along the river. The Thames Boat Trip is a river cruise under three Brunel bridges with a lighthearted commentary. This is followed by a river walk with views of Greenwich, and a short train ride through the Thames Tunnel, the ‘eighth wonder of the world’. Expats can also get glimpses into the history of people living in houseboats on the river through interviews and photography. The Great River Race is a chance to cheer on your favorite crew, as the boats race between Millwall and Ham. Those who fancy a swim can jump right in for the Thames River Swim.

BBC Proms in the Park

The BBC Proms showcases Britain’s largest open-air classical music event. ‘Proms’ is short for ‘promenade concert’, referring to outdoor concerts. It takes place during the eight-week summer season and includes daily orchestral classical music concerts, along with other events held at the Royal Albert Hall in London. The tradition began in 1895 and during each season there are nearly 70 concerts along with educational and children’s events.

The annual outdoor concert is one of the hallmarks of the event, taking place in London’s Hyde Park. Marked by a quintessentially British character, the closing night performance is shown through a live link-up with the Royal Albert Hall. This year’s events features Frankie Valli and The Four Seasons, along with a mix of leading pop and classical music acts such as the BBC Concert Orchestra.

The View from The Shard

Another must-do activity this summer is catching the view from The Shard, formerly London Bridge Tower, a 95-storey skyscraper in Southwark, London. It is western Europe’s tallest building and provides 360-degree views of the city. Spend a summer’s day on the 72nd floor Skydeck and enjoy breathtaking panoramic views across London. This year The Shard has collaborated with Grow Wild to celebrate ‘The Year of the English Garden’ by creating the city’s tallest garden. Enjoy the delights of vibrant, colorful British flora, while sipping on garden-themed beverages from the pop-up bar up on the Skydeck.

Barbecue in the park

London residents who love barbecues, but are among the many without gardens, can get creative by having one in a park. Of course, there are laws that prohibit barbecues in some open green spaces; but there are also quite a few where it is allowed, usually in designated areas. Only two councils permit barbecues in its parks, and one of them is the Camden Council, which has also provided useful guidelines for users. Some of the Camden parks that make great barbecue spots are Waterlow Park, where the unique location on a hillside offers great views of the city; and Lincoln’s Inn Fields, a centrally located park a short distance away from Holborn station.

Islington is the other council that has lifted its ban on barbecues. The tree-lined 29-acre park Highbury Fields, along with a designated area for barbecues, also has an orchard and a children’s play area, while Caledonian Park has a basketball court and a clock tower. Also in Islington is Gillespie Park where barbecues are allowed, but in specially designated areas away from its nature reserve.

In Hackney, there is London Fields where the barbecue-friendly areas are located towards the Broadway Market end. In Southwark, spend a summer’s day at Burgess Park, which has eight purpose-built barbecues and additional spots for disposable barbecues around the fishing lake. In Sutton, there is Beddington Park, which has several barbecue stands closer to the café.

What are your favourite things to do in London? Let us know in the comments!