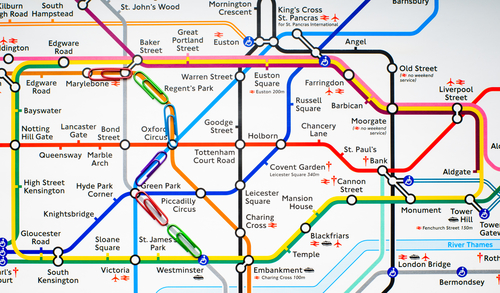 Public transport is more or less the easiest way to get around London due to heavy traffic and congestion charges. London is excellently connected as a result of the public transport reaching all over the city. However, the system can seem complicated to the newly initiated. For example, since some of the underground in London is so old, the routes may not necessarily be ever so logical, and the system may vary a bit from what you are used to in your home country. Never fear! Expat Focus is here to rescue you from any confusion. In this article we’ll cover the types of public transport in London, how you can go about paying, and how to easily navigate your way around like a local. You’ll be using your Oyster Card like a pro in no time!Types of public transport in London:

Trains
Trains are a popular way to commute in London and all over the UK. The train companies that operate in and around London are Southern Rail, SouthEastern Railway, London Overground, Greater Anglia, South West Trains, Chiltern Railways and London Midland. There are also various airport train services that run between London stations and nearby airports such as the Heathrow express and Gatwick express.

Buses
Buses are a little less popular with commuters as they tend to take longer than the train or underground. However, you have the additional benefits of being able to see where you’re going and choose where to get off by pressing the red ‘STOP’ button. This means that if your destination has a bus stop close by, taking the bus may well be more convenient (and less crowded) for you.

Trams
There are some tram services operating in London, but they are mostly limited to the areas of Wimbledon, Croydon, Beckenham and New Addington. They are not a widespread mode of transport throughout the whole city. The network Tramlink was only introduced to London in the year 2000.

All public transport services in London are separated into zones and lines or routes. Maps and timetables are available at all train and underground stations and can be found at bus stops, plus we have listed some resources at the bottom of this article that you can use to access timetables online.

Trains: by machine (cash or card), or at the ticket office.

Each train station has its own ticket office and machines where you can purchase a ticket. Most stations have barriers to prevent you accessing the station platform without having purchased a ticket. So if you have not bought a ticket prior to travel, make sure you allow yourself a few minutes before your train is due so you have enough time to get one. It can often save you money if you plan your trip in advance and purchase a ticket online.

You can use an Oyster Card or travelcard as well as the contactless payment mechanism on your bank card or phone on all London Overground trains and most National Rail services in zones 1-9. However, you cannot use these on the Heathrow, Gatwick or the Stansted Expresses.

You can also purchase weekly, monthly, or yearly train tickets at your ticket office or on the station machines.

If you have a contactless card or a contactless payment system (such as on your phone) linked to a card, you can use this to swipe in and out of the underground and the fare will be charged to your card. You can also use an Oyster Card or travelcard in the underground, or simply purchase a ticket from one of the machines. Some stations will have a ticket office that you can also purchase a ticket from or go to in order to ask for help.

Buses and trams: you can no longer pay in cash to the driver, so now you have to use either a contactless card, Oyster Card or travelcard.

Most bus stops will not have any form of ticket office, so if you do not have an Oyster Card or travelcard, you can purchase a ticket from the driver with cash, or use your contactless bank card.

Tram fares are treated in the same way as buses, with a flat rate fare of £1.50 which can be paid by a contactless card, Oyster card, or travelcard. However, you can no longer purchase or use paper tickets on tram services in London. You can also purchase weekly, monthly or yearly passes for buses and trams.

How to navigate London’s public transport

The key to public transport in the UK capital is to plan your journeys beforehand. Helpful apps such as CityMapper are invaluable and allow you look up where you want to go and how you want to get there. This app will tell you, for example, the train or underground station that you need to go to, what line you need to go to, and what stops to get off or change at. Looking at all the different lines and colours on the London Underground map can be quite confusing, so it’s great to break this down and simply look at the lines that you need for your journey. You can always check the maps on the platforms to double check that you are going in the right direction.

Peak and off-peak times vary in price, and discounts may not be available during peak times, which is generally before 10am and after 4pm.

All about Oyster Cards here:
https://oyster.tfl.gov.uk/oyster/entry.do