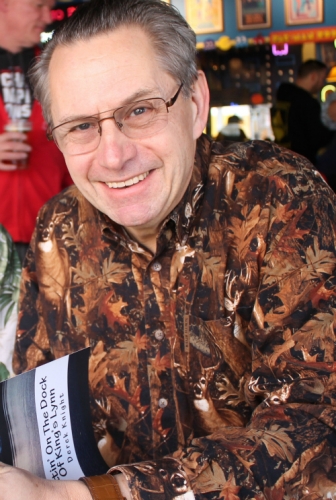 Derek, you're an author, blogger and columnist for ExpatFocus. Tell us a bit about yourself: What was it that first prompted you to start writing?

Well, I always wanted to write, which probably came from being an avid reader when I was young. I loved the way a story could carry me away from where I was to somewhere entirely different, and I wanted to be able to do that too.Although I never gave up my dream of being a writer, “life” took over, and I had a career, got married, had children, and was busy making my way in that world. I did find that the creative part of me came out in my love of doing presentations and writing instruction manuals, but that was really as far as it went.

It wasn’t until I took early retirement from my job that I actually started to wonder if I could really write something creative, and that was when I started my blog, which then lead me on to writing my first book.

Your book, Sittin' On The Dock Of King's Lynn, is out now in paperback or ebook. Could you give us a brief overview of the experiences discussed in the book?

On the face of it, Sittin’ is all about how I found myself in a town I’d never been to, knew no one, and had nowhere to live, and is the story of how I discovered the area and fell in love with it. It’s a descriptive book, and I’ve been told that people can get to see the place through my eyes. It also speaks to some extent about the emotional journey that we are all on in this life.

What was it that made you choose King's Lynn as a destination?

Ah! I’m glad you asked that! You see, I don’t ever recall deciding on King’s Lynn.

I was vacationing in America, had just made a decision to move somewhere different in the UK and was looking at towns that were reasonably easy to get to from London, but not too close. I started to read and something about the town interested me. Somehow, over the course of a week or so, it just became the place I was going to live in when I got back to the UK.
As I say in the book, there were lots of reasons, but really, it was just the place that my journey took me to next.

You discuss some of the challenges of expat life in the book; what was the biggest challenge you faced when you first became an expat, and how did you overcome it?

I think that the biggest challenges of moving to Lynn came after I’d been there for a time. At first, my time was taken up with looking for accommodation and furnishing it, finding a job and getting settled. When December came, and I was alone at Christmas for the first time in my life, that was when it actually became real. I remember sitting on a bench by the river, thinking about where I was and where I was going, and coming to realize that every tradition starts somewhere as a new thing. I decided then and there that this was going to be my tradition from now on – sitting by the riverbank on Christmas morning was something bright and sunny that I could look forward to from year to year.

Many people dream of writing a book, but few actually do it. How did you structure your time whilst writing the book, and what was your writing process like?

I was one of those people for a long time! I tried to start a book many times, not never got very far, and I realized that I was getting too wound up in the process, so I never got an overview of the real story I was trying to tell. Over time, I’ve come to see that it’s two connected things.

The first is discipline. Boring but true, you just have to do it to get it done. The great thing is that the more you write, the easier it is to do it, and the better you get. I had to – I still have to – set aside time each day when I am working at my trade of writing.

The second thing is that editing is a real skill and takes time! It took probably three times as long to proof and edit Sittin’ as for me to write it, so new authors need to be prepared for that.

Do you have any advice for people who are thinking of moving from a city to a smaller town or rural area for the first time?

Yes, my advice would be simple; don’t think about it, do it. You may love it or you may hate it, it may be the best move you ever made or the worst, but it will be something you did, rather than just thought about.

The best piece of advice I can give you once you get there is not to assume anything. One example from my time in Lynn was when I had someone in my flat doing a repair, and in talking we both used the expression of “going up to town.” Only as he was leaving did I realize that while I meant going to London, his idea of a big trip was to go into King’s Lynn town center.

Finally, when you're not writing, what do you like to do in your spare time?

I’m almost a suburbanite nowadays, and my wife and I like to look after our home and yard. My next passion after writing is photography, and I love to go out with my camera and capture the fascination of the world around us. We also go hiking which as well as being excellent exercise gives me more opportunities for photography. I’ve also been doing some photo-journalism for my local community paper and do quite a bit of volunteering in my community.

You can follow Derek's adventures on his blog, and you can buy a copy of Sittin' On The Dock Of King's Lynn, as well as Derek's other books, on Amazon.