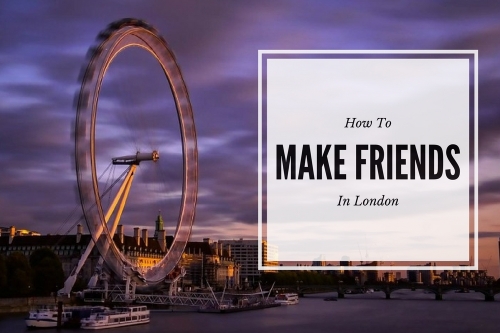 London has the third highest population in Europe, after Istanbul and Moscow, with an estimated 8 million people calling the Big Smoke home.

With so many people, it’s surely easy to make a friend in the capital? Sadly not: London has incredibly high rates of loneliness, with over 30% of the city’s population reporting that they feel isolated. As one Guardian reader put it, “I never felt more lonely than when I lived in London, surrounded by millions of people.”There are people everywhere, all the time, but that doesn’t mean you can talk to them. Die-hard Londoners are famed for their reticence when it comes to striking up conversations with strangers, so taking that first step to building a proper friendship can seem like an insurmountable hurdle.

But there is hope. While talking on public transport is forbidden unless you’re on the night bus, and hallooing passers-by on the street is the private domain of the hated ‘charity mugger’, there are plenty of ways to meet people in London. And with so many lonely Londoners, there are plenty of people who are just as keen to meet you.

You’ll need to take some risks, and not every fledgling acquaintance will develop into your brand new best friend, but the payoff is well worth the effort.

Almost everyone in London comes from somewhere else. According to the 2011 census, 36.7% of the population are foreign-born, so it shouldn’t be difficult to find someone from your home country

Finding your own expat community in London is a great way to make some friends early, and dive straight into an active social life. You can even start before you move. Many communities will have an online presence, with message boards for you to chat to people who’ve already made the move, as well as a plethora of activities that you can sign up for, so you can hit the ground running when you arrive.

Established expats can also offer you all kinds of hard-won wisdom on the ins and outs of living in London and help ease you into speaking the city’s brand of English.

Meeting people from home is a great way to gently introduce yourself to London, but be warned, it can be a trap. If you want to meet locals, you’ll need to break away from your expat friends and make an effort to really get involved in everything that London has to offer.

Live in a shared house

The cost of living in London is astronomically high; chances are that living in a shared house is where you’ll have to start when you arrive. A cheap and shabby one-bedroom flat will set you back upwards of £1,500 monthly, while the average price for a room in a shared house is a comparative bargain at £743 per month.

There are a few ways to get yourself into a shared house. Websites like spareroom.co.uk are aimed at people who are looking for rooms in houses. Or you can use online forums to find a group of people who are keen to look for a house together. Either way, it provides you with an opportunity to find like-minded people to move in with.

Of course, there are always risks associated with moving in with complete strangers. Everyone has their horror story of that flatmate from hell, and disagreements are almost inevitable.

But if you do your research properly, and have just a smattering of good luck, the people you live with can just as easily become your new London family.

Chances are, if you’re moving to London, you’ll need a job. Spending time getting to know your colleagues is well worth the effort, as Brits often let work and play blur together.

London has a very strong culture of being chummy with the people you work with. Going out for drinks after you knock off on a Friday is generally a weekly affair, and while you don’t have to go every week, not going at all you might get you a reputation for being aloof.

If you do go, you’ll find that the gloves come off for after-work drinks. Everyone is on an even footing, and that guy from accounts who seems hopelessly boring in the daytime might just turn out to be a globe-hopping Zumba instructor.

Whatever the outcome, it’s worth a try, and at the very least being friendly with the people at work can make your job more pleasant.

You know that thing you love doing? Someone else in London loves doing it too. So do their friends, and they all get together to do it every week. They’d love for you to join in.

When you add in the Greater London Metropolitan Area, and all the commuter towns on the outskirts, over 12 million people call London home. With so many people around, it is guaranteed that there are others out there who share your interests.

Whether your passion is art or birdwatching, dancing or board games, crafts, circus performance, natural history, or canoeing, you can do it in London.

Finding a hobby group or society is a great way to meet people with similar interests and get drawn right into a ready-made community. Many groups will have a home online, so the internet is a good place to start chatting to fellow enthusiasts and arrange to join their clubs.

Get involved in the local community

London is a mighty city that is actually a huge collection of small villages, rather than one homogenous metropolis. Many parts of London have their own identity, and have even gone so far as to tag ‘village’ on to their names; Walthamstow Village and Dulwich Village being only two of the many. These neighbourhoods often host their own events and festivals.

Local societies and interest groups are everywhere in these small communities. They might be friends of the local wildlife reserve, or publish the village ‘what’s on’ magazine, or be associated with the church, or be a lobby group interested in community issues. If you like where you live, have a scout around for ways to get involved.

Many local businesses also run events, such as live music or storytelling, so head on down and get involved. You’re bound to start seeing some familiar faces and you’ll be supporting local entertainment in the process.

Becoming a regular in the local shops and cafes can also really help you settle in and feel connected with the people around you. There’s nothing like a friendly smile from someone who knows your face to brighten up your day, and these venues will often advertise events elsewhere in the area.

There’s a staggering array of amateur sports teams in London. They range from the expected – football, cricket, and rugby – to the entirely unexpected realms of roller derby, ice hockey, and Quidditch.

With such a massive array of expat communities in London, sports from all over the world thrive, including Australian Rules Football and American Football. Even better, it’s not just expats who take part, so joining a sports team is a great way of meeting people from all over the world, as well as home-grown Londoners.

Most outdoor sports will play seasonally, so you might be left with some down time during the year. But indoor sports and martial arts can be run all year round.

Joining a sports team is a great way to meet new people, with the added bonus of keeping fit and getting out of the house.

Volunteering is hugely popular in London. Animal shelters, museums, historic attractions and the Zoo are all big draws for volunteer services, and for many the opportunity to work in such places is a dream come true. Because they have such a high profile, however, finding volunteering positions at well-known tourist attractions can be difficult.

There’s still a vast array of worthwhile causes to give your time to, however, and a whole host of organisations dedicated to hooking up volunteers with those in need of assistance. You could help the elderly with gardening, mentor a young person or help rejuvenate a local beauty spot.

The Mayor of London’s volunteering initiative, Team London, is just one of many hubs where you can find opportunities all over the city, in all sorts of industries.

Whether you’re volunteering just once for a few hours, or you’re able to give your time more regularly, it’s a great way to meet a diverse range of people. St John Ambulance has even been referred to by one volunteer speaking to the Guardian as “the biggest dating agency in London”.

Go back to school

From the cerebral to the active, the creative to the analytic, languages to philosophy, knitting to contemporary dance, ukulele to IT, you can learn just about anything you care to think of in London.

Short courses are a popular way to both pick up some new skills, and meet new and interesting people. You can start looking on CityLit.ac.uk for accredited courses, or if they don’t have what you’re after, look further afield for something more niche.

If you take up a short course, you’ll be spending time every week with the same group of people. Chances are you’ll share an interest. Even better if it’s interactive; language classes are great for breaking down that first barrier.

And if you make the effort to get people to stick around for a drink afterwards, you could meet your new best friends in the classroom.

If you’re looking to meet new people in London, you’re not alone. There are so many lonely Londoners, in fact, that a whole new industry has sprung up around trying to hook you all up.

These social clubs are mainly based around the idea of getting people together and sending you out to do an activity. It might be an event like a boat party on the Thames, or it could be a photography class, or an architectural walking tour of London.

Most of the activities on offer are things you could find all on your own if you wanted to, but this ensures that everyone at the event is keen to find a friend.

If you go out with a social club, you know you’ll meet a group of people who are just as keen to chat as you are. As one participant put it, joining a club such as CitySocializer “makes having fun with strangers a totally normal and fantastically pleasurable experience.”

London can be tough and isolating. The locals might all seem to follow an unwritten social code that prohibits eye contact and strictly precludes any social niceties in public. People on the tube are rude, and no one is interested in how your day is going.

But don’t worry. You’re foreign. You don’t know the rules – which means it’s easier for you to break them.

Say hello to someone on the tube. Ask if you can pat their dog. See if they’re up for a chat. The worst that can happen is an awkward few minutes if someone says no. But don’t worry, you’ll never see them again after they disappear into the commuting crowds.

It’s not easy, and it might not always go well. But trust your instincts, pick your people carefully, and think about timing. Rush hour might not be the best – but later on at night, you’ll find the rules are relaxed, and you’ll be more likely to find an opening.

You might not make a friend for life. But you never know who you’ll meet; and that, after all, is what making new friends is all about.