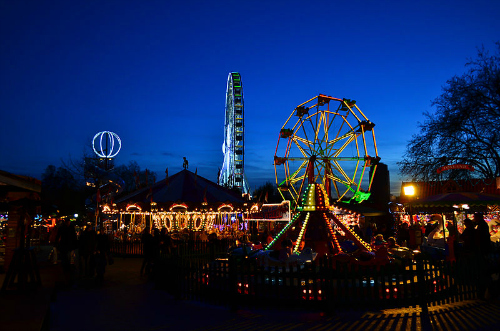 Being away from family can be very difficult for expats at Christmas. More than most other celebrations, Christmas, for most people who celebrate it, is all about sharing with extended family and close friends. Spending Christmas away from all of them can make you pretty miserable if you let it. Nonetheless, if you enjoy Christmas and the Christmas season, London is among the best places in the world to be in at this time of the year.It is of course important to remember that there’s limited transport on Christmas day, and in addition, a lot of restaurants and pubs are closed. If you’re planning to have a Christmas meal or pint at your favorite restaurant or pub, be sure to find out in advance whether they’re open. If you’re planning to go anywhere at all, figure out in advance how you’re going to get there. The tube and most other public transport is shut; taxis and minicabs do continue to run, but most taxis will charge you an additional £4. You can walk or cycle around the city, which is great fun, but if you want to use your car, congestion charges are waived on Christmas Day. A lot of public facilities such as clubs, museums, and many of London’s attractions are also likely to be closed, so if you’re heading out on Christmas Day, call ahead to confirm that they’re open.

Visit a Christmas market or fair

London has a number of Christmas markets and fairs, both large and small. This is where you’ll find decorations and trinkets, Christmas cards, jewelry, clothing, a variety of food and drink, including Christmas treats, mulled wine, mulled cider, and plenty more. It’s a delight to wander through a London Christmas market sipping on a warm, spiced drink, listening to Christmas carols. Winter Wonderland at Hyde Park is one of the biggest and best Christmas fairs, with great rides and a fantastic skating rink. It’s also free to enter.

Borough Market is a famous market that runs all through the year, but visiting during the Christmas season is a different experience, and recommended at least once. In addition, there are several other well-known markets in London, as well as a few smaller ones that are usually worth visiting.

Watch ‘The Nutcracker’ on Ice at the Royal Albert Hall

London has a special fondness for this classic Tchaikovsky piece. The two-act ballet tells the story of a little girl whose beloved Nutcracker doll comes to life on Christmas Eve, setting off some strange and magical adventures. The work didn’t do too well when it was first performed in St Petersburg in 1892, but since then, it has turned into a Christmas classic in many parts of the world.

In London every December, there are at least four productions of this classic to choose from in the city. They’re all fantastic productions, but if you must pick one, we recommend The Nutcracker On Ice at the Royal Albert Hall. This is a truly spectacular, mind-boggling performance, with 4000 square feet of ice, fabulous costumes, incredible magic tricks and special effects, a brilliant cast made up of professional skaters at the national, European, and international levels, and of course Tchaikovsky’s unforgettable music played by a live orchestra. You have a limited number of performances to choose from, so pick a date and buy your tickets as soon as you can.

Go for an outdoor swim

Sure, this sounds absolutely crazy. Swimming outdoors in London at the end of December, when temperatures hover above zero and the water feels like it could freeze over at any moment – why on earth would anyone want to do that? Well, apparently because as crazy as the idea is, it’s also crazy amounts of fun. Enthusiasts of outdoor swimming in the winter say that it’s incredibly invigorating and gives you a buzz like nothing else can. They also say that it’s highly addictive. There’s no denying the fact that it can be pretty painful at first, but the body adapts surprisingly quickly, with no lasting ill effects. What’s great about swimming in the winter – apart from the sheer thrill of it – is that it’s among the cheapest things you can do for fun, and it’s the one time of year when you’ll find the pool not crowded, no matter what the time of day.

One important tip: if you’re tempted to wear a wetsuit, don’t. Experienced swimmers say you’re better off without one. And in case you come from a warm part of the world and find it difficult enough to simply walk around London in the winter, but are still intrigued by this whole idea of outdoor swimming at this time of year, you could go watch the Peter Pan Cup race at Hyde Park on Christmas morning.

Have a special Christmas meal

Like we said earlier, a lot of restaurants, bars, and pubs in London are closed on Christmas Day. However, there are a few that are open, and these will typically be doing something special for Christmas. Christmas breakfasts, lunches and dinners provide plenty to choose from. Many pubs and bars also do special Christmas cocktails, and of course there’s mulled wine or cider to warm you almost everywhere you go.

If you’re not up for a fancy Christmas meal at a fancy restaurant, you could put together your own Christmas meal at home with a few other expat and local friends. You can make it as elaborate or as simple as you want, without spending too much money on the meal. Everyone can take responsibility for a different dish or part of the meal, you can put some mulled wine or cider on the stove, and maybe even pick up a few pints of the special Christmas ales that are out at this time of the year.

Go for a walk in central London on Christmas morning

London in general is quite pedestrian-friendly, at least compared to a lot of other capital cities across the world. However, walking around the city on Christmas day is particularly enjoyable. It’s a rare opportunity to enjoy the Christmas lights, the weather, and London’s beautiful architecture in relative peace and quiet, and sometimes in near solitude. As we mentioned earlier, a lot of public transport shuts down for the day, and in general traffic is extremely light in many parts of the city.

Central London is particularly charming on Christmas Day, even if it’s slightly disorienting walking down deserted streets that are, on most other days, absolutely buzzing. If you like, you can even go for one of the many great heritage walks across the city, such as the Charles Dickens walk. It’s the perfect time to stroll around and soak in the sights without the usual hordes of tourists and office-goers jostling for space everywhere.

Go skating at one of London’s many skating rinks

London has plenty of great skating rinks, both indoors and outdoors. The indoor skating rinks are wonderful too, but skating outdoors is what we recommend at Christmas time, with all the lights and London’s marvelous architecture and monuments around you. Even if you don’t really know how to skate, the experience will still be worth it. Besides, many of the skating rinks offer lessons for beginners, and there’s no better time or place to learn than London in December.

Winter Wonderland at Hyde Park, which we mentioned earlier, is one place with a fantastic outdoor skating rink, but there are many more to explore. A few that are particularly worth mentioning are Eyeskate, which is on the South Bank and right in front of the London Eye; the Canary Wharf Ice Rink, which has a heated viewing terrace, pop-up bar and restaurant; and the Hampton Court Palace rink, where you can skate against the backdrop of 16th century spires and arches.

There are few things that make the season more Christmassy than Christmas carols. London, fortunately, offers you plenty of opportunities to enjoy some great carol singing in the lead-up to Christmas, often at beautiful and historic venues such as Kensington Palace, Southwark Cathedral, and St Paul’s Cathedral. Many of these are ticketed events that need to be booked in advance, so keep that in mind when making your plans.

Of the free options, the carol singing at Trafalgar Square is probably the best, with numerous different carol singing troupes doing their thing under the huge Christmas tree there. If you prefer to stay away from the events of such scale with their large crowds, you can instead look out for local carol singing groups in the neighborhood.

There are probably a hundred different tours that you can take of London through the year, but in December, there are several Christmas specials that are particularly worth trying. A tour of London in an open-top bus on Christmas Eve is one option – the city is always beautiful at night, but with the Christmas lights everywhere, it’s even better than usual.

Another option is the Dickensian Christmas tour that takes you through Canterbury, Dover, and Greenwich, includes a Christmas service at Canterbury Cathedral, and ends with a three-course Christmas lunch.

Most museums and other attractions in London are closed on Christmas Day, and some stay closed on Boxing Day too. You can of course visit them at other times during the Christmas season, but two exhibitions that remain open on Christmas Day are the ones at the Charles Dickens Museum and the Geffrye Museum.

At the Dickens Museum, A Christmas Carol Reimagined explores the themes of Dickens’ beloved Christmas classic, and includes original artwork interpreting scenes from the novel. At the Geffrye Museum, you have Christmas Past: 400 Years of Seasonal Traditions in English Homes, an exhibition that explores how the festival has been celebrated in England through the last four centuries, with a special focus on the 17th century this year. It’s a magical experience to walk through the recreated middle-class homes from bygone eras, with decorations, lights, and music authentic to the time. What’s even better is that the Geffrye exhibition is completely free. Tickets for the Dickens exhibition are only £8.

There’s a fair bit on this list that kids will enjoy, but this one is especially for the expat families with children. Every child gets excited about the jolly old bearded man in the red and white suit, and London has some great Santas that your children will absolutely love. You’ll find Christmas grottos at numerous places across the city, with Santa welcoming visitors right up till Christmas Eve. Many places have elaborate displays and activities for kids too, such as storytelling, card-making, and a visit to Santa’s workshop. The Santa at Hamleys toy store is particularly fun, and so are the Santas at Harrod’s, the Royal Albert Hall, and the Museum of London. Some visits and activities are ticketed and may need to be booked in advance, so make sure you check with a venue before you actually turn up.