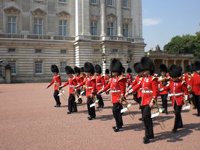 London is a charming city with many attractions. It is modern and multicultural, but also celebrates its rich history and culture. There are several things to do and see in London and here’s our list of five experiences that are as unique as the city itself.

Secret Cinema aims to create ‘experiences’ around popular movies by incorporating the storyline into an event before the actual screening of the film. Everything, including the locations, is kept under wraps, except for the one standing instruction – Tell No One.You only know where to go when you receive a cryptic email bearing the location of the event. The events involve interactive set pieces and actors playing characters in the film suddenly appear in the audience. The audience is also dressed in costume and this makes it tricky to identify the actors. The company has held more than 18 productions till date including One Flew Over the Cuckoo’s Nest, The Shawshank Redemption and Bladerunner. It has also held simultaneous screenings in London and Kabul. It turns out that Secret Cinema is not so secret anymore for it’s first production attracted only about 400 people but today the average audience consists of above 21,000 film buffs. Those interested can register at http://www.secretcinema.org

Backstage at the Royal Opera House

The Royal Opera House at Covent Garden, central London has always been a cherished venue for the British. It hosts close to 295 performances on its main stage annually, including spectacular ones by the Royal Ballet. Backstage Tours offer a glimpse into what goes on behind the scenes. It includes some history of the theatre and information about current productions. Since there are different performances held at different times, each tour might be different. Also, the Royal Opera House is a working theatre and plans may be altered at short notice.

Nearly everyone’s read the books and watched the movies, but the interest surrounding this magical tale is still very much alive. To get an insight into the life and times of the boy wizard, hop onto a luxury air-conditioned mini coach that takes you on a three-hour tour around film locations and inspirations in London such as Grimmauld Place, the Leaky Cauldron and the beloved Platform 9 ¾. There are lots of interesting tidbits to be learned on the tour such as author JK Rowling’s inspirations, what went into making the films and also trivia about Hogwarts and the magical world. True Harry Potter fans can even put their knowledge to the test with a trivia quiz.

Dukes Bar at St. James Place is known for its impressive array of martinis and personalized cocktails. Among its many patrons is James Bond author, Ian Fleming. The super-spy’s classic line ‘shaken, not stirred’ was said to have been created right here at Dukes Bar. Head barman, Alessandro Palazzi, has also created a martini called Fleming 89 in honor of the author. Dukes Bar is a great place to get together with friends for a round of drinks. Choose to sit in any of three elegantly decorated smaller rooms. The service is sophisticated and a drinks trolley is wheeled right up to your table, where a martini or any other drink of your choice is prepared in front of you. The vermouth used in the martinis is made especially for the bar at the Sacred Microdistillery in Highgate.

A Room for London

This one-bedroom architectural structure was meant to stay only until 2012, but became so popular that has remained till date. It takes the form of a riverboat that has been washed up on the roof of the Southbank Centre’s Queen Elizabeth Hall. The installation is available on rent for nightlong stays. From the riverboat, you can catch impressive glimpses that span Big Ben and St. Paul’s Cathedral. It has all the amenities of a hotel room and there is such a demand for tickets that they’re sold through a ballot organized by Living Architecture. Availability and booking can be found on the Living Architecture website. The inspiration for this structure came from the book Heart of Darkness by Joseph Conrad, which was an account of the author’s riverboat voyage.