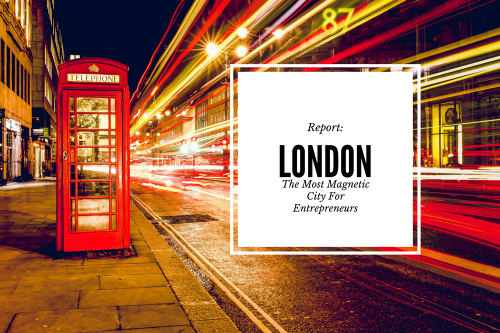 The capital and financial hub of England has always been one of the most popular expat destinations in the world. Some of the factors that make London a great place to live in include its living standards, rich culture, diversity, benefits, education, career prospects and healthcare, to name a few. There is plenty to see and do for people of all ages and backgrounds but there is a lot more to this unique city than its attractions.Entrepreneurs and budding businesspeople from around the world head to the Big Smoke when in the process of establishing themselves. London has now also become one of the leading hubs for startups in Europe.

A recent survey was conducted by the Global Power City Index (GPCI), which evaluated and ranked 42 major cities worldwide in terms of their “magnetism” or their comprehensive power to attract creative individuals as well as business entrepreneurs from all the continents so that they can mobilize their assets in securing economic, environmental as well as social development. The 6 main functions representing city strength that were considered included Economy, Research & Development, Accessibility, Livability, Environment, and Cultural Interaction. Each function comprised various indicator groups, which in turn included various indicators. There are a total of 70 indicators that are looked at. The respondents were classified into 5 different categories: Researchers, Manager, Artists, Residents, and Visitors.

It was no surprise to see London rank right at the top, ahead of cities such as New York, Tokyo, Paris, Singapore, Seoul, Hong Kong, Amsterdam, Berlin, and Vienna. In fact, the city has consistently been at an overall score of number 1 for the last 5 years, since 2012. Before that, it was rated 2nd best for 4 consecutive years, just below New York but ahead of Tokyo, Paris, and Singapore.

London beat all the other places when it came to Cultural Interaction. It was evaluated even more highly for the Number of Visitors from Abroad, the Number of Stadiums, Trade Value of Audiovisual & Related Services, and the Number of Large World-Class Cultural Events Held. The city fared quite well in Accessibility too, with an increase in scores for indicators like International Freight Flows, Transportation Fatalities per Population, and Taxi Fare. It was also in the top 10 in terms of Economy (2nd), Research & Development (3rd) and Environment (8th). However, England’s capital didn’t do very well in terms of Livability, getting a low score of 22. The indicator groups that are a part of this function are Working Environment, Cost of Living, Security and Safety, Well-Being, and Ease of Living.

The survey took the preference of the respondent groups too and London ranked right on top for the Managers as well as the Visitors and was 2nd for Researchers and Residents. Some of the reasons for the high scores included Cultural Attractiveness and Opportunities for Interaction, Richness of Tourist Attractions, and Mobility. Only artists gave it a slightly lower score of 5th, choosing Paris, New York, Vienna and Berlin above it.

Another survey by the European Digital City Index also suggested that London is the best city in the whole continent in terms of support to digital entrepreneurs, for startups as well as scale-ups. This Index comprises these 10 items:

Unfortunately, the city received fairly low scores when it came to certain factors like Labor Costs, Cost of Living and Cost of Office Space. This, however, holds true for almost all mature ecosystems.

What makes London so attractive to businesspeople?

Some of the greatest British and international businesses were born in the Big Smoke and thrived from there. Almost 40,000 tech companies have their headquarters in London, which is why the capital of England has become a force to be reckoned with in the digital world. According to the figures published by TechCityUK (a publicly funded entity, which promotes the tech culture London) this city secured close to £ 1.13 Billion (US $ 1.4 Billion; € 1.31 Billion) in 2014 venture capital financing, which is almost double the figure for 2013 and more than 10 times the amount received in 2010.

Anyone interested in starting a company or expanding to a new location should seriously consider investing in London, primarily because:

The government encourages startups as well as entrepreneurs by offering various forms of support, like access to mentoring programs and funding by working with the private sector. In addition to that, the Department of International Trade’s (DIT) Global Entrepreneur Program helps entrepreneurs from overseas relocate their business to the UK. This entity also assists with the incorporation of startups or early-stage technology businesses. So far, this program has helped:

The support provided to entrepreneurs and businesspeople by the government comes at no additional cost and generally includes:

The authorities also help overseas entrepreneurs overcome financial and economic challenges once they move. However, in return for their support, the government encourages them to set up their headquarters in the UK.

In order to qualify for the Global Entrepreneur Program (GEP) support, you need to meet two criteria. First, you should be an overseas based entrepreneur or have a technology business. The second condition is that you must want to establish the headquarters of your global business in the UK. Those who are interested can email info@entrepreneurs.gov.uk for more details.

As the Mayor of London, Sadiq Khan, pointed out, in spite of the UK’s recent decision to leave the European Union (EU), London is thought of as the best place in the world to do business. The capital offers an ideal environment for any setup to thrive, be it a small startup or a global enterprise. He further adds that he is working with the business community in the city to ensure that the key needs of entrepreneurs are being constantly met as the country exits the EU so that London continues to maintain its number 1 position across the globe. However, it is still not clear how the city’s power and ranking will be affected as the UK proceeds with its withdrawal from the EU.

Another factor that gives London an edge over other cities in the UK is that a majority of the popular national newspapers and magazines are created there. This offers companies ample opportunity for press coverage and advertising.

Entrepreneur Groups in the UK

With all the support provided by the state and private entities, entrepreneurs from around the globe are bound to be attracted to the UK and especially London. Many of the established ones have come together to form mutually beneficial networks and at the same time provide assistance to other potential businesspeople in the form of workshops, seminars and presentation platforms to attract investors.

If you have a business idea that has a high potential for growth, you can come to the UK on an Entrepreneur visa, as long as you have the funding of at least £ 50,000 (US $ 61,770; € 58,337) from an approved body, such as the UK government, a venture capital firm, or a DIT-endorsed seed competition.

Some of the most well-known startup mentors in London include Entrepreneur First (EF), Y Combinator, Entrepreneurs in London, Seedcamp, Oxygen Accelerator, TechStars, Wayra, Collider, Emerge Education, Start Planet NI, Property Innovation (PI) Labs, and the London Entrepreneurial Exchange, to name a few. Of course, their support is likely to come at an additional price, like a small stake in the startup. Go to the UK government’s website to learn more about these companies.

One of the risks with so many startup support companies (more commonly known as Accelerators) chasing different ideas in London is that many of the entities remain undifferentiated in a crowded space. This may work as a deterring factor for overseas entrepreneurs, who may want to look at other, less populated places to establish themselves.

Getting an Entrepreneur Visa

Access to £ 50,000 (US $ 61,770; € 58,337)
For the entrepreneur visa, you should have £ 50,000 investment funds from:
– An entrepreneurial seed funding competition that has been endorsed by UK Trade and Investment
– A government department that has made funds available for setting up or expanding a business in the UK
– A venture capital company that is registered with the Financial Conduct Authority

You may also apply for this visa if you have invested the amount of £ 50,000 in a local business. However, do keep in mind that you should have invested the funds less than 12 months ago when you apply. Also, the rules change if you have already had a UK visa or are switching over from another visa. For more information on this, go to the government’s website.

Do bear in mind that the funds have to be held in the UK, not overseas. You may also apply for this visa if you have invested £ 200,000 in a local business. Again, you should have invested the funds less than 12 months before you apply. For more information, go to the government’s website.

When an individual decides to visit or settle down in any city, one of the main factors that has an impact on their decision is their perception of that particular place. It is therefore essential for a city to brand itself strategically if they are interested in competing with other leading urban centers worldwide. The GPCI undertook a City Perception Survey by studying and analyzing the public image of 8 popular cities across the globe: London, New York, Tokyo, Paris, Singapore, Seoul, Hong Kong and Shanghai. The participants were asked to associate each city with certain keywords. The objective of this exercise was to understand the unique characteristics of each place. Another aim was to contribute to the process of creating new brand image strategies for the leading cities.

Predictably, London was associated with words such as History, Culture and Tradition, probably because of its colorful and eclectic past. The fact that the city is regarded as multicultural was evident through words like Diverse and Cosmopolitan. Interestingly, a maximum number of respondents thought the city was Expensive.

Some of the other words that revealed people’s perceptions included Big Ben, Double Decker Bus, Beautiful, Queen, Rain, Fog, and Cold. After integrating the various responses, London’s overall image can be described as “A global city with somewhat gloomy weather, but brimming with landmarks, and possessing a unique history and tradition”.

This shows that in spite of being regarded as one of the most expensive cities in the world, London is highly popular with expats, including entrepreneurs who are interested in setting up new businesses.