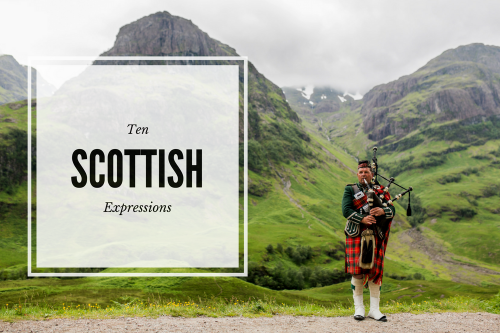 Scotland: a historic land where kilted clans roam the windswept glens and bagpipe music fills the air. Or something like that.

This proud nation is actually a little more diverse than just haggis, Rabbie Burns and Braveheart. Although it does celebrate its cultural heritages, Scotland is also a destination for modern culture, with the annual festival in the capital being a whirlwind of art, theatre, music and comedy.Scotland is also a vital link for the supply of North Sea oil, with 920 million tonnes of crude sat off the coast adding £35 billion to the UK economy each year. The nation is also a leader in engineering, boasting a centuries-old tradition of shipbuilding.

It’s not just heavy metal the Scots are good at producing; software and lightweight electronics are developed by scientists in ‘Silicon Glen’, where giants such as IBM and Hewlett-Packard employ thousands of skilled Scots.

And yes, there is still a thriving industry in whisky, tartan textiles and deer stalking for visiting lords and ladies. Tourism also draws people from around the world, with CNN naming Scotland as its number one destination to visit. In total the industry is worth around £4.8 billion a year.

So if you’re thinking of a change of scene, to a nation with both stunning scenery and colossal cultural standing, it might be worth heading north of the border.

But do remember, the Scots have a wee dialect all of their own, and what might sound like havering to the average visitor, the expat needs to be fluent in.

So for a slang-filled sojourn through the Scottish dictionary, take a look at our rundown of ten phrases in the Scots language. 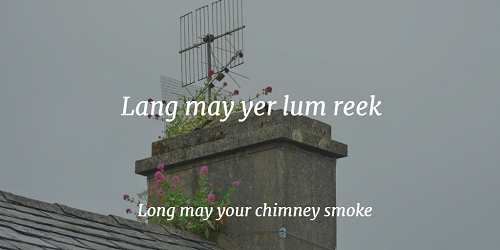 This phrase is a lovely way of blessing your friend and their family, and wishing them fortune and happiness for the future. Literally translating to ‘long may your chimney smoke’, the adage means you are hoping their house stays warm and cosy.

It might seem like a fundamental thing to wish someone today, but during the highland clearances of the 18th and 19th centuries, highland men could return from tending sheep on the hills or fishing to find their home had been demolished by their landlords.

The gentry were seeking to turf out the rent-paying families in order to create giant pastures for more lucrative livestock. This process left entire families sheltering in the rubble of their destroyed farms, with many freezing to death.

Consequently when Scots bid each other ‘lang may yer lum reek’, they really are wishing the family luck in avoiding a cold, starving and undignified death. 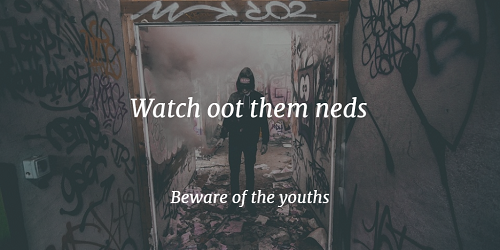 We’d never suggest that every young person on the street is up to no good. The vast majority are just bored and looking to chat to each other, but there is a peculiarly Scottish breed of teenager who really is trouble.

The ‘NED’, or Non-Educated Delinquent, is a serial troublemaker, always at the centre of petty crime, vandalism and intimidation of innocent bystanders. In reality, this character is pretty rare, but tabloid headlines would have you believe one lurks behind every lamppost, park bench and phone box along every street in the country.

Police reports have been using the term since the 1930s to describe any youngster who looked a little shifty. Consequently the ‘ned’ has been blamed for gang culture in poorer parts of Glasgow for almost 80 years, even if only a minority of youngsters are involved in crime.

Consequently you may well hear the odd warning about youngsters seen lingering in an area. Chances are they will be no bother, but do be aware of your surroundings.

Recent years have called for the word to be dropped from common usage as it is a term widely used to condemn young people regardless of guilt or innocence. 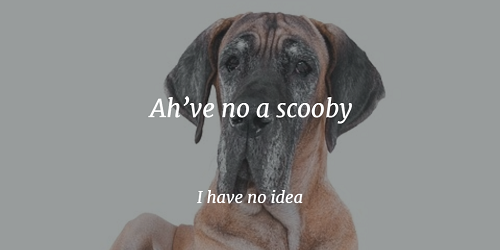 Bizarrely a lot of Scottish slang seems related to the better-known Cockney rhyming slang. Originating from London’s East End, this local lingo was used by market traders to describe ware that might not be strictly legal. By swapping nouns for words which rhymed, like ‘apples and pears’ for ‘stairs’, the likely lads were able to keep authorities from busting their rackets.

‘Ah’ve no a scooby’ follows similar linguistic rules and gives it a generous coating of Glaswegian accent. Translating as ‘I haven’t a scooby’, the term reference to the crime-solving cartoon Great Dane Scooby Doo.

‘Scooby Doo’ rhymes with ‘clue’, hence not having a scooby means you just don’t have clue about something. The term has widened in usage to become a nickname for someone who might not be cleverest soul. Be warned, if the locals start calling you Scooby, the nickname is an affectionate poke at your mental agility. 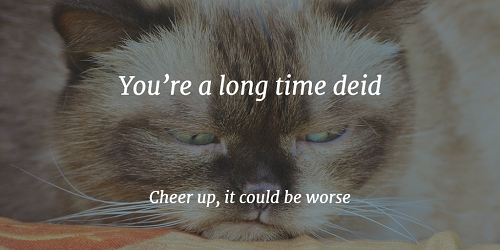 Cheer up! There’s a lot that can go wrong, but what doesn’t kill you makes you stronger, and if it does happen to kill you, you will have all eternity to bemoan your bad fortune.

‘You’re a long time deid’ is a phrase reserved for the sourpusses and worrypots in the room. If sat there with a frown and a grumble about how awful things are, expect to be broadsided by this adage. There’s a stereotype of the dour Scotsman always looking for the worst possible outcome, intoning “we’re doomed” at every opportunity: well this is the appropriate reply.

Of course, bringing up an individual’s mortality isn’t always the best way of asking them to cheer up, but this phrase is essentially saying the same thing as ‘live in the moment’, or ‘enjoy this life, because you won’t get another chance.’ 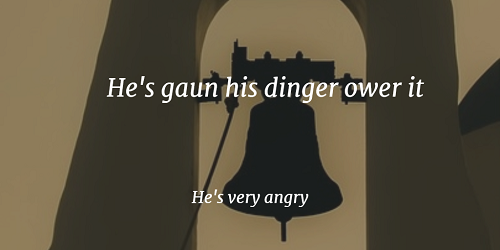 You may hear a colleague say this about your boss, and if you do it might be an idea to hide in the conference room until he’s calmed down.

Whatever it is you’ve done, the big man is not best pleased, he’s not even quite angry, he’s utterly irate and he’s on the warpath.

Nobody seems too sure where the phrase comes from, but some suggest it has something to do with bells. Although there is no explanation why angry people would turn to campanology to express their rage.

Consider this phrase to be a warning siren, one that should prompt evasive manoeuvres, taking cover and prepping your CV for another job. 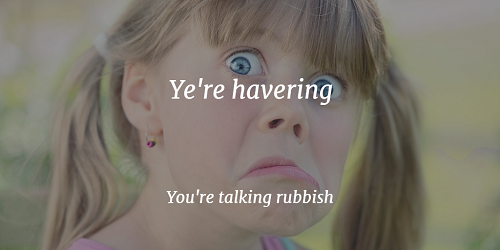 This might be what the boss says to you as you attempt to explain your erroneous actions. As you mumble and splutter apologies mixed with excuses to his red, vein-bloated face, he’ll accuse you of making no sense at all.

“To haver” is to talk nonsense. The Proclaimers famously offered to walk 500 miles in order to affectionately, and presumably drunkenly, haver sweet gibberish to their object of affection. But your boss won’t take it in a romantic sense.

Be warned about the subtle nuances of this phrase as he screams ‘ye’re havering’ into your terrified face. He may mean that in this instance your explanations are less than fluent and lacking their usual eloquence. On the other hand he could be listening very carefully to your reasoned, considered opinion and still be dismissing you as an imbecile.

Again, this may be a cue to start preparing the CV and looking for new opportunities with another company. 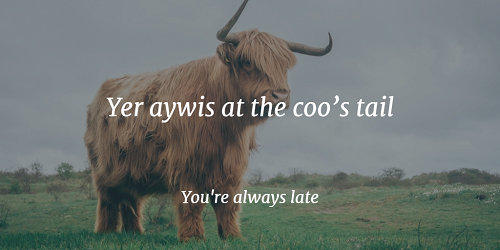 Yes, you are the rear end of a big woolly highland cow.

Calling somebody a cow’s arse might not be the most professional way to remonstrate a colleague for lateness, but it’s the most Scottish. The phrase should be fairly self-explanatory. The tail is always behind the cow, and the target of this idiom is always the last to arrive, or may indeed be a little slow on the uptake.

This line is an oldie but a goodie, with music recordings as old as 1904 featuring songs which include the line. It might not be the politest of phrases, but there certainly less polite ways of saying exactly the same thing. 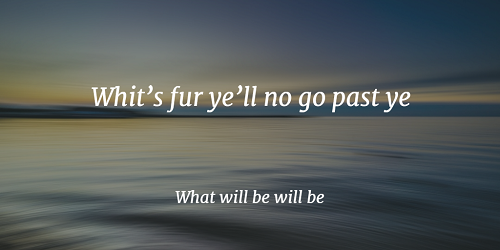 Que sera sera, c’est la vie, what will be will be. Every language seems to have a similar phrase: one that ultimately shrugs at events and pledges to just go with the flow and see what life has lined up for us.

The Scots are a resilient people, suffering centuries of English oppression, famine, harsh climate and bloody service in wars across the British Empire. Perhaps this phrase is more of a mantra for the hard men of the highlands, boldly facing adversity and accepting the trials they must overcome.

Whatever is coming to you, good or bad, will find you; the question is how are you going to respond to it? ‘Whit’s fur ye’ll no go past ye’ is a term that has a certain amount of inevitability about it, almost as though there really is a bullet out there with your name on it.

But don’t treat this epithet as a reason to live in fear; rather, view it as a challenge to stand with what the English would call ‘a stiff upper lip’ and meet adversity with stoic pride. 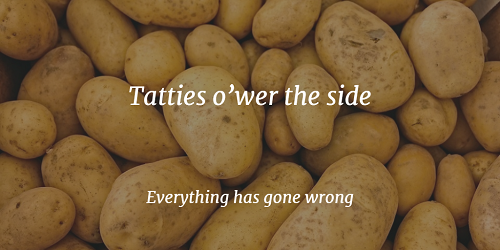 This is bad, this is very bad indeed. Even today the Scottish diet includes a lot of potatoes; the Scottish spud appears in the Burns Supper alongside haggis and parsnips. Tatties were a key part of the highland diet during the winter months, helping people keep well and providing a rich source of energy during long winter months.

An incident of ‘spuds overboard’ whilst rowing across a loch or firth could see a family’s winter stores sinking to the bottom. This dramatic situation has since become a byword for a situation with awful consequences indeed. 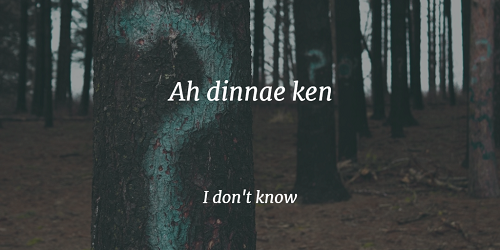 This is a phrase you should master as soon as possible. Not only will you hear it a lot, it’s one that you’ll be using frequently in your first few months.

The newly arrived expat will be faced with a barrage of challenges, from setting up new bank accounts to negotiating their way around new cities. But as you peruse the Royal Mile in Edinburgh or negotiate the winding rural roads of the Highlands and Islands, this phrase will both signal the start of awkward social interactions and bring them to a close.

‘Ah dinnae ken’ simply translates as ‘I don’t know’, a simple verbal shrug. You may hear this when asking for directions, or when asking at the post office about some complex, expat-specific paperwork that is rarely dealt with by rural postal clerks.

Most Scots will be happy to help you in your quests, although you can expect some curious questioning about the who, what, where, why and when of your circumstances in remoter parts of the highlands. This is just part of the fun of being in a tightknit community.

You can also use the phrase to fend off some of the more unwelcome questions. In some contexts, and with the appropriate look of perplexed bamboozlement, the same phrase can stand in for ‘I don’t understand.’