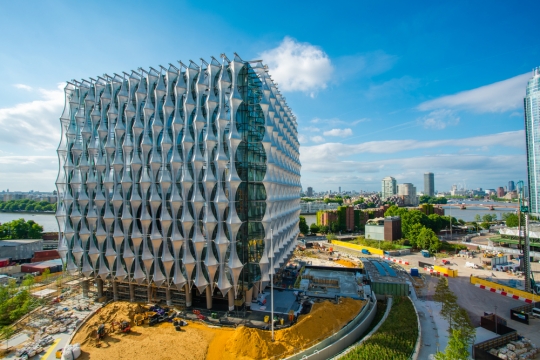 America has a new home. But don’t panic; there’s no need to go checking maps! The entire United States has not shifted from its traditional spot between the Atlantic and Pacific. Instead, the US embassy in London has re-opened in brand new buildings, leaving its famous Grosvenor Square location.The new embassy has already caused a diplomatic stink, with President Trump refusing to visit the UK to formally open the facility. In a series of typically bombastic tweets, he accused the Obama administration of needlessly wasting funds on a “bad deal”, and of selling off the old embassy for “peanuts”.

Close to the corridors of UK power in Westminster, the old embassy had been the home of American diplomats since 1960. Crowned by a giant, glittering bald eagle, the nine-storey modernist block was a source of help and support to Americans in the UK, but was also a focus for protests and demonstrations over the years.

Over the years, thousands of activists have used the landmark as a rallying point to make their voices heard over issues such as the Vietnam war, the 2003 invasion of Iraq and alleged human rights abuses at Guantanamo Bay.

There were also repeated threats made against the building and the staff who worked there, following a spate of attacks on US installations in the 1990s and early 2000s. One alleged plot planned for a plane to crash into the Embassy, with the rooftop eagle sculpture used to guide terrorists onto their target. Security concerns are one reason for the move to a new facility in Nine Elms.

Already nicknamed “America-On-Thames”, the 12-storey facility will house around 800 staff and is expected to assist one thousand visitors a day. Costing USD$1billion, the new embassy has improved security features, with blast-proof glass as well as ornamental gardens and ponds acting as a modern-day moat to deter would-be attackers.

Despite Trump’s ire, the decision to sell off the Grosvenor Square site was taken by the Bush White House and was actually very forward thinking. Nine Elms might not be a familiar address to many, but it is a rapidly developing part of London, with nearby derelict Battersea Power Station transformed into luxury homes and business properties. On the Southern banks of the Thames, the new embassy will eventually be connected to improved tube and rail links, as well as riverboat services. The sale of the old embassy largely funded the cost of the new one, as it is one of the first projects to be completed in a new, developing neighbourhood.

Although discussion continues about the embassy’s design and cost, it is already open for business. Ambassador Woody Johnson describes the new compound as “a signal to the world that this special relationship that we have is stronger and is going to grow and get better.”

As well as providing the diplomatic link across the Atlantic, the embassy is there to offer support to US citizens in the UK. This can be useful for tourists in the UK, but even more so for the nearly 200,000 US-born people living in Britain long-term.

For most people, the only reason to visit an embassy is organizing a visa for travel overseas. Americans looking to arrange visas to the UK need to do this via British consulates in their home country or online. However, if you have been living overseas for long enough that you qualify for dual-citizenship, you will need to register this with the US embassy. You will also need to register the birth of any children born in the UK who would qualify for citizenship, even if that is dual UK-US citizenship.

The visa department will also be a vital stop for anyone looking to move back Stateside with a spouse or partner who is not a US citizen. The embassy can help with arranging spousal visas and unmarried partner visas.

The ominous sounding FBU is actually there to provide American expats with a vital service. Standing for Federal Benefits Unit, this organization provides support to 44,000 beneficiaries, helping administer social security, Medicare and Veterans’ Affairs. This department is there to ensure that Americans overseas get all the support to which they are entitled. This means that eligible citizens can continue to collect retirement, disability or survivor’s benefits while overseas, and that being overseas doesn’t automatically count you out of such schemes.

It should be noted that the FBU is not there to provide advice on the payment of taxes. This is a problematic area for Americans overseas, who can fall foul of the FATCA rules, meaning they pay US tax on income earned in another country. The Internal Revenue Service (IRS) did keep an office in the old embassy, but since 2015 the only resource for expats to obtain information about tax overseas has been an expensive helpline or online at irs.gov.

Another area of consular support that has retreated online is voting. US voters register in their home state, and that state remains responsible for them even if resident overseas. As rules vary state-by-state, there may be different options open for getting ballots sent out ahead of voting day. Despite the myriad of confusing systems to register for voting, they all begin with one click at FVAP.gov, which will enable you to complete a new Federal Post Card Application (FPCA).

The Embassy does provides support for a number of educational programmes, offering grants for schemes which promote Anglo-American partnership and developing young leaders. This includes a number of scholarships to study at US universities provided by Fulbright Commission.

Embassies are also there to provide help when things go wrong. If US citizens are the victim of a crime, the embassy can assist by providing food, clothing, medical care and shelter. It can also help make contact with friends and family Stateside or replace passports if needed.

In the event of an American citizen being arrested in the UK, they will be subject to British law. Although the US embassy cannot interfere in the legal process, they can visit citizens held in custody and offer advice on how the system works.

Should the worst happen and a US Citizen die overseas, the embassy can provide help in arranging for effects and remains to be transported elsewhere in the world.

In any cases where emergency help might be required, the embassy operates a helpline to contact staff for assistance.

So, even if President Trump never comes to cut the ribbon on the Nine Elms embassy, its doors are already wide open and ready to help.