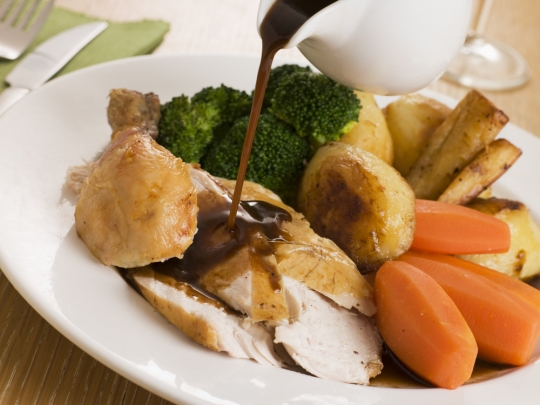 Some countries are famous for their cuisine. The French have Cordon Bleu, the Italians have a rich heritage of pasta and wine, Singapore sizzles in a fusion recipe of cultural delights.

Britain, on the other hand, enjoys a global reputation for stodgy dollops of carbs, tasteless beer and an obsession with gravy. While the rest of the world may not see the charm of the Cornish pasty or the savoury deliciousness of the Scotch egg, British people love their comfort food.Since Britain is also famous for its miserable weather, it shouldn’t be a surprise that the warming Sunday roast is the dish most commonly craved by expats. Traditionally eaten after attending church, the roast dinner is a hearty feast. The dish is such a part of British culture that GQ, Vogue and the Times have all dedicated pages to praise for the greatest of British grub.

A traditional roast is usually a roasted beef joint, served with crispy roast potatoes, fluffy Yorkshire puddings, crunchy vegetables and rich, steaming gravy. Of course, everyone has a slightly different take on the best recipe for the Sunday roast. Some families chose chicken, others long for lamb, while some go for a vegetarian dish along with the potatoes and veg. And that is part of the point of the Sunday roast, it is a taste of home.

Not only is the roast a quintessential part of British cuisine, but it’s made to family recipes, with delicious secrets passed from generation to generation. When overseas, Brits aren’t craving A roast dinner, but THEIR roast dinner, the tastes and smells of family and home.

The best way to work up a hunger for a roast is a bracing country walk, ending at a welcoming pub. Settle at a table next to a wood fire and spend the rest of the afternoon savouring this serving of British tradition.

With an estimated 37 percent of London’s population coming from overseas, it looks like many of the UK’s expat community settle in the capital. For those who want a taste of British cuisine without a countryside hike, we’ve listed the top London venues for a Sunday roast. Some of these are tasty traditional treats, others put a modern spin on the spuds and gravy.

So, this Sunday, spend time savouring the capital’s top-rated roasts.

In the Great British tradition of not mucking about, this restaurant dumps all pretence and focuses on seasonal grub done well. As their motto says, everything on the menu is ‘deliciously British’

Set in Borough Market’s former Floral Hall, you can sit by the windows to watch London’s foodies getting excited about ingredients amongst the stalls below.

Roast serves up a variety of meats, succulently prepared and served alongside favourites like ‘pigs in blankets’, which are miniature pork sausages wrapped in crispy bacon. The sirloin beef, sliced to wafer thin perfection, is well-reviewed.

Venture north for a side-serving of nostalgia with your Sunday scoff. A self-professed ‘old, local boozer’, the Railway has been lovingly restored to its 1930s mock-Tudor glory. The cosy pub serves good, honest roasts at good, honest prices.

The dishes are served with a homemade touch, accompanied by carefully selected craft beers. Seek out a comfortable seat by the roaring fire to while away the afternoon, while you feast on bubble and squeak or sticky toffee pudding.

London’s only pub with a Michelin star serves a generous portion of country fare. Cooked up by chef Sally Abe, who worked with Gordon Ramsay at Claridge’s, the menu is replete with game and fresh vegetables grown in the pub’s rooftop garden.

Diners praise the pub’s incredible food, served in a welcoming, relaxed atmosphere. GQ magazine sings the praises of the 55 day-aged rib-eye of Hereford beef, generously served with heaps of Yorkshire puddings and veg.

East London’s famous steakhouse and cocktail bar has branched out around the city. With venues near the shops of Regent Street and the permanent food festival of Borough Market, a delicious Sunday roast is always close to London’s most famous sights.

Barmy about beef, Hawksmoor switches from T-Bones to tasty tatties and bone-marrow gravy, slathered over the best of British meat.

The roast is a dying art. It takes time and practice to do it well, ensuring that all its delicious components are ready at the same time. But that’s part of the fun. Every roast you make will be an improvement on the last.

Get into the habit of rescuing the beef juices to make your gravy, try smothering your spuds in duck fat and stew over whether to boil or steam your vegetables.

The most important thing about a roast isn’t the food itself, but rather getting friends and family together around a table to celebrate a weekend well wasted, pushing back Monday for just a few more delicious hours. So go on, start cooking up a storm this Sunday.