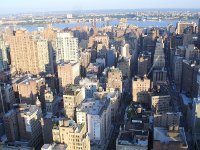 To say that New York City has been a historically popular destination for expatriate professionals would be akin to saying that water is wet: since at least the middle half of the 20th century, the city has been the primary destination for trans-Atlantic émigrés and, indeed, for financial and communications media innovators from around the globe. Of course, given that there have been no massive Continental wars for over 60 years, the best and brightest of Europe have sought residence here in much lesser numbers than when prompted to move by these unparalleled historical disasters. On the other hand, though, the quality of transplants to the city from the developed or industrialized world is still quite high in terms of education and demonstrable talent, despite their now moving there “by design” rather than fleeing from nightmare worst-case scenarios.

The cost of living index for New York City can be daunting when compared to the U.S. – its rating here is over 160 when compared to the national average of 100 – but those well prepared to deal with this eventuality will find no shortage of neighborhoods in the city that cater to the needs of internationally-minded expatriate professionals.Wherever one ultimately sets up shop in the city, tightly bonded expatriate networks or “diaspora groups” exist throughout NYC to help ease in arrivals from just about any nation (or, as the case may be, from other American regions and cities.) With such opportunities for networking available, it is easier than in most cities to become quickly acquainted with local customs, but is also easy to stay in touch with the goings-on of one’s place of origin (should the new arrivals in question want to ‘re-relocate’ there after their New York experience.)

Among New York’s storied five boroughs (with Yonkers to the near west sometimes being granted honorary ‘sixth borough’ status), Brooklyn and Queens are the two most diverse in terms of ethnicity and socioeconomic background. Brooklyn and Queens’ status as the most populous of the boroughs does contribute to this, and it can capably be argued that they are cities unto themselves (with their own population numbers almost equivalent to that of Chicago.) Brooklyn still maintains some of the original Dutch character inherited from the first settlers of Long Island, though nowadays foreign-born citizens of virtually any nation can arrive here without surprising or unsettling current Brooklyn residents. Those who plan on making international engagements while in New York should also take note of Queens’ access to air travel: both LaGuardia International Airport and John F. Kennedy Airport are located here.

Affluent professionals should find Brooklyn neighborhoods like Park Slope and Boerum Hill to be accommodating – these neighborhoods feature an adequate amount of green or park space, along with good public schooling and a rate of public safety that is more than adequate for a U.S. metropolis, and certainly better than that found in the nation’s capital or the West Coast population centers. The Williamsburg neighborhood of Brooklyn, meanwhile, is also a kind of ground zero for cultural entrepreneurship among twenty-somethings, hosting everything from film production studios to the global handicraft website Etsy.com.

Speaking of which, new residents with families may wish to avoid the skyscraper-dotted financial epicenter of Manhattan, with the exception of Tribeca. Only the latter seems to feature adequate public schooling facilities; while leisure activities here are definitely skewed in the favor of young adults rather than kids (see the Lower East Side and East Village, Manhattan’s famous bohemian nightlife districts.) Those who wish to move to Tribeca should not be surprised to find themselves rubbing shoulders with a global elite of power brokers and celebrities, with everyone from International Monetary Fund manager Dominique Strauss-Kahn to local talk show icon David Letterman being potential neighbors. The 10013 zip code in Tribeca, once one of the most expensive in the nation, is still highly prestigious – however, in recent years it has taken a backseat to the 11962 zip code on Long Island, where residential properties have reached a value plateau of around $30 million USD. Perhaps this is something to keep in mind for those seeking out the best of the best in terms of property in the New York metro area.

The Bronx and Staten Island can both be safely passed up by professional and high net worth individuals. Though gentrification has affected these areas to some degree, and the grim derelict buildings characteristic of the late 1970’s and early 1980’s are no longer such a fixture here, this revitalization is still a ‘work in progress,’ and there are still some drawbacks to these areas. For one, commute time by any mode of transportation can be lengthy if one works in Manhattan (the most likely place to do so if, again, you are an expatriate professional), while Staten Island is not linked via rail transit to the remainder of the city. Though both of these boroughs are the least populous in the city, that does not always translate into a greater peace of mind- the violent crime rate in the Bronx is at least three times the national average.