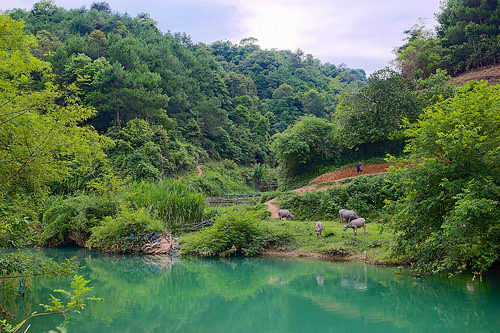 For a long time, and until relatively recently, Vietnam had been associated almost entirely with conflict, trauma, and poverty – the French colonization, the Japanese occupation, subsequent freedom along with the split into North and South Vietnam, followed by the notorious Vietnam War, which eventually ended with reunification under a communist government. This led to several years of oppression, poverty, and isolation.Fortunately, since 1986, the Vietnamese government has increasingly eased up and opened up, in terms of the economy, international relations, and freedoms in general. All these factors, along with the country’s now booming economy and its natural beauty, have changed perceptions of Vietnam across the world and have started to draw more and more expats to live there. Vietnam offers a low cost of living but great economic opportunities in a young and growing market; a rich, vibrant culture that’s different from what most expats are used to and more varied than what they expect; reasonably good and still developing infrastructure; and of course great weather and natural beauty.

Most expats in Vietnam tend to live in the big cities, mostly in Ho Chi Minh City and in Hanoi. However, there are a few who make their lives in rural Vietnam, and this is a very different experience from living in the urban parts of the country. Needless to say, it is also drastically different from many expats’ home countries, and culture shock and homesickness tend to hit harder here, even for expats who have deliberately chosen a rural lifestyle.

Infrastructure in rural Vietnam is of course much poorer than it is in the cities. Power supplies are quite unreliable, especially in the more remote areas. There are widespread power shortages, and blackouts can be quite frequent. If you’re living in the countryside, it’s important to have your own power backup, either an inverter or a generator. Mobile network coverage in rural Vietnam is decent, although not perfect, and you need to make sure you’re subscribing to the right service provider. Internet services however tend to be quite poor, with slow speeds and frequent, unpredictable downtime.

Health services are particularly bad in the rural areas, in terms of both availability and quality. This is one important reason to choose a location that has quick and easy access to a town or city.

As for non-essential infrastructure, this too can be quite poor. Local shopping options will usually be limited to local and traditional goods. For anything else, you’ll usually need to head to the nearest town or city, which could be anywhere from half an hour to several hours away, depending on your exact location.

Rural life is always cheaper than city life, and in Vietnam, this isn’t just because prices are lower. Part of it is also the lack of opportunity to spend your money, which can sometimes be a bit frustrating. Purchases will often need to wait till you make your trip to the nearest supermarket or expat-focused store, and your options for entertainment and eating out will be fewer (and cheaper). This pretty much rules out impulse purchases.

Rents are of course much lower in the countryside, and it’s easy to find a large house in a lovely location without even coming near to breaking the bank. Household furnishings and fittings might not be particularly modern, but this is changing.

Most expats find a warm welcome in rural Vietnam, with neighbors who are eager to form relationships and lend a helping hand. Communication however can be a bit difficult. Fewer locals in the countryside are likely to speak English or any other foreign language, and Vietnamese can be quite difficult and confusing, mainly because it is a tone language, a characteristic that most non-Asian expats (and many Asians too) are entirely unfamiliar with.

Culturally too, there will be more to learn and adjust to in rural Vietnam, and of course more to experience. People in the rural areas are not as global and modern in many of their habits and views as urban Vietnamese are. In addition, foreigners are more of a novelty in rural Vietnam, and staring or even asking rather personal questions can be quite common. Needless to say, no harm is meant by this.

Pollution is a massive problem in urban Vietnam, but this of course is one thing you do not have to worry about in the countryside. In general, rural Vietnam is cleaner – the air, the water, the food, and even the streets in general. Safety too is less of a worry – in the cities, burglaries are quite frequent, and crime rates in general are higher.