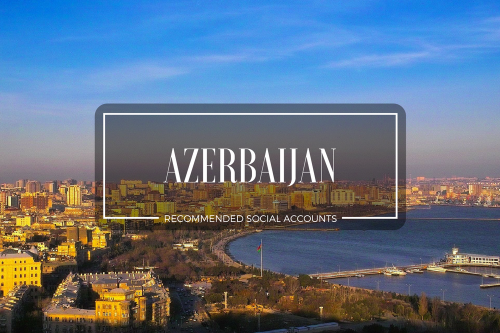 At Expat Focus, we like to be on the lookout for resources around the web that could help prospective expats adjust to their new countries. Today, we’re taking a look at Azerbaijan and some of the social media accounts you should be following if you’re thinking of moving there.Azerbaijan Expats
Facebook Group

Azerbaijan, the former Soviet republic (and infamous Eurovision song contest winner in 2011) is a fascinating country to live in. The Azerbaijan Expats Facebook group connects both new and longterm expats living between the Caspian Sea and Caucasus Mountains, which span Asia and Europe. With 251 members and an active social and events calendar, this is one to watch.

With article shares in a combination of English and Turkish, the Azeri Times brings news to expats and locals living in Azerbaijan. With their Twitter updated more frequently than the Facebook page, the Azeri Times helps expats old and new to keep up to date with both national and global news events.

With more of a focus on the capital city of Baku, this busy Facebook group was created to share information, advice, opinions and the interests of the members, so others can benefit from their experiences. Offering a variety of posts as well and fun (and educational events), this is a great resource.

Self-professed outlier, synapse, amplifier, and Twitter feuilletoniste,
Ani Wandaryan specializes in sharing the important events and issues of the South Caucasus (with a wider remit as required.) Curating a paper.li account called the ‘The Caucasus Voices Daily’ he gathers articles on a variety of related topics such as business, science, politics and on a lighter note, arts and entertainment, all with a focus on Azerbaijan.

Possibly one of the most niche and helpful groups for learning how to actually speak Azerbaijani (and translating the everyday phrases that guidebooks don’t quite cover) this group supports each other by translating the almost untranslatable. This is a more intimate group that keeps the chatter private and between their members.

An Independent magazine about Azerbaijan, Visions of Azerbaijan was founded in 2006 by The European Azerbaijan Society and The Anglo-Azerbaijani Youth Society. Creating content that is both entertaining and informative, the articles shared are an excellent source of inspiration and history.

Not only promoting the many positive aspects of this fascinating country, TEAS also highlights the plight of the 875,000 refugees and Internally Displaced Persons within Azerbaijan. With offices in the UK, Belgium, France and Germany, along with a representative office in Azerbaijan, this pan-European organisation share a unique window on the nation.

With 1,200 followers and 3,000 members of the Facebook group, the Baku Expat Community is an active network of people from many countries around the world both living in Baku and planning to move to the Caucasus country. With a few helpful locals offering advice and assisting to navigate the challenges of settling into an unfamiliar culture, this group even has a ‘buy and sell’ offshoot member group which assists practically with moving to Baku.

Founded in 1995 as a private media outlet, Trend News Agency is a well-known news provider in the Caucasus and Caspian region. With Trend producing roughly 500 articles per day (according to the website) in 5 languages, including English, Russian, Azerbaijani, Persian and Arabic, topics range from major political and economic developments to financial articles from top agency experts.

We’re always on the lookout for more accounts to feature – if you write about living in Azerbaijan on social media, leave us a link in the comments and we’ll take a look!