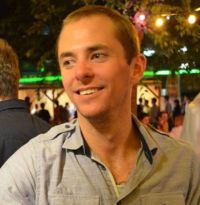 My name is Eric Helms and I am an American human rights professional working in the fields of Roma rights and human trafficking prevention. I was born and raised in Denver, Colorado and still consider it my home despite my endlessly itinerant lifestyle.

I first moved to Bulgaria in late 2006 to serve as a Community and Organizational Development Volunteer with the Peace Corps in the small Rhodope town of Bratsigovo. I spent two and a half year working in the local Roma communities on youth leadership initiatives, human trafficking prevention and sexual health education.

After completing my Peace Corps service in 2008, I returned to Bulgaria on multiple occasions to conduct field research on human trafficking prevention and to work with Romani youth organizations in the Pazardzhik region. I eventually relocated to Sofia in the autumn of 2011 to work for the Areté Youth Foundation, a Sofia-based non-governmental organization working to support the educational achievement process for Roma high school students.

As with any move to a foreign country, the challenges were greatest during the initial months. Having only a basic knowledge of the Bulgarian language, I spent my first three months living with a host family near Dupnitsa while taking an intensive language-learning course. Although my host family was patient, caring, and attentive, there were invariably moments when the idea of mastering the language seemed insurmountable. Rest assured – it gets easier.

Culturally, Bulgaria is not a far cry from other European countries. The pace of life is slower, bureaucracy is more difficult to navigate, and ideas are more strongly rooted in the past but the people are welcoming, friendly, and genuine.

I have had the most success finding apartments through Bulgarian friends and contacts. Many Bulgarian families own multiple properties throughout the country due to the former governmental policies under Communism and are willing to rent their property for a very reasonable rate if approached. I found ideal places to live in Sofia, Bratsigovo, Provadia, and Pazardzhik through this route without any problems.

If lacking the local contacts to search for accommodation, there are a variety of websites that advertise properties for rent or for sale in villages, towns, and cities throughout the county. However, without a good knowledge of the Bulgarian language this may be difficult or lead to higher prices.

There are surprisingly few expats living in the Bratsigovo region. While I was living there from 2006 to 2008, there was only one British couple living on the outskirts of the town. The Rhodope villages in the region had a slightly larger expat population although modest in comparison to the rest of the country.

As one could expect, Sofia has a larger and more diverse expat population. I was involved in a small but strong expat community of human rights professionals from across Europe who were living in Sofia or working within the region.

The locals, particularly in the smaller towns and villages, are the most positive aspect of living in Bulgaria. I have maintained the relationships I formed with my neighbors and the Roma community in Bratsigovo to this day and frequently return to spend a long weekend or vacation with them. I have found Bulgarians to be hospitable, giving, and genuine. The negative experiences I have had over the years have been limited and greatly outweighed by the positives.

In Sofia, the locals tend to keep more to themselves and are more accustomed to the presence of foreigners. However, they are still willing to get to know expats and help if any difficulties arise.

I have yet to find a much better experience than sitting on the terrace with local friends, drinking mavrut, and watching the sunset over the Rhodopes on a warm summer night. The region is filled with beautiful sights, quaint towns, undiscovered hiking trails, and friendly people.

Living in Sofia is a vastly different but equally enjoyable experience. In recent years, the city has seen a boom of creativity, culture, music, and art. Every time I wander the streets I stumble upon a new café or restaurant that is embracing new ideas. Having traveled extensively within the Balkans and Europe, I can safely say that there is no better city for wandering and exploring than Sofia.

The local mentality can be stifling at times. Outside of Sofia, there is a strong resistance to change and new ideas that is deeply rooted in the victim-mentality that many Bulgarians have. The idea that the current state of affairs in the country can be blamed on the Ottomen occupation or Communism is prevalent. Instead of examining what the country can do to move forward and progress, many Bulgarians would rather maintain the status quo and blame the past.

The overt racism towards Roma populations is another aspect of expat life that can be difficult to accept. I have never seen a stronger and more shamelessly racist mentality towards an ethnic group than that of the majority population towards the Roma. Unfortunately it is a mentality that has been fostered for centuries and will continue to persist for the foreseeable future.

Learn the language. There is simply no excuse for living in Bulgaria and not having a good grasp on the language. Tutors and language courses are readily available throughout the country and the locals are understanding and willing to help you learn. Without knowing the language, it is impossible to fully understand and appreciate the local culture and all that the country has to offer. Although English is spoken to some extent in the larger cities, it is still relatively unknown in the towns and villages. Take advantage of the opportunity for total immersion to learn the local dialects and nuances of the language. The rewards are immense.

I will continue to work in the human rights field in Eastern Europe and will be splitting my time between Budapest and Bulgaria. The Roma rights field is an exciting area of work to be in currently with the mass expulsions in Western Europe and the anti-Roma political parties gaining support in many Central European countries. It is my hope to continue to advocate for Romani human rights in a way that best supports the local communities.

When I first arrived in Bulgaria in 2006, I did not expect the experience to have such a lasting impact on my life. Yet here I am, seven years later and I still cannot seem to shake the draw that the country has on me. It is something that I have come to embrace and I hope that others will have a similar experience.