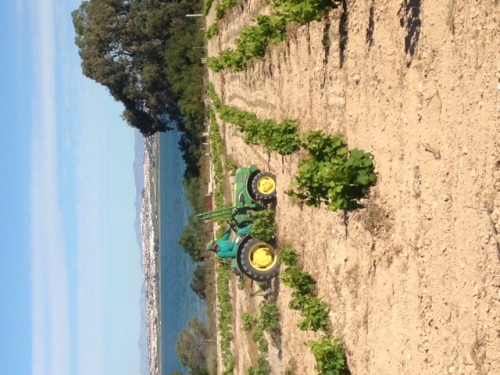 Call me sentimental, but I fancy my heart skipped a beat when I first saw the words ‘La Mata’ in the property columns of the local press. I was visiting my daughter here and asked her where this ‘marsh’ was. Soon we were parking the car on one of the many streets leading to the beach and within minutes, I had fallen in love.I am still in love with La Mata some fourteen years on. It isn’t a pretty town – none of your Romanesque churches and winding alleys here – as development has scarred the once traditional town of single storey homes with dozens of five-storey-high apartment blocks. Thankfully they stopped giving permission for even higher ones after only one or two had been built, but only a few traditional homes remain. No, it isn’t pretty, but it touches my soul in a way that no other place has. I bought my apartment that same day.

It is now eight fifteen in the morning. I am doing my round of the Parque Natural, accompanied by early birdsong, pale blue, yellow and pink spring flowers and the scent of pine. In the early light I can see badger trails, I watch the water rushing along the narrow canal from the sea into the salt lake, fish dancing and shimmering just beneath the surface. At my approach, a kingfisher darts into her nest on the bank. When I reach the bridge, a group of sturdy eucalyptus trees provides shade and my dog flops down, panting in the heat. I sip from my water bottle before allowing her to lap from the flow as I watch the cooling liquid darken the sand. I amble along the walkway to a nearby hide to look at the lake. Sandpipers scurry along the shore in search of food, while a colony of ungainly flamingos dip their necks like a hundred miniature crane booms, scooping up millions of tiny artemia organisms into their crooked bills.

A lizard dashes in front of me as I approach the vine growing area. There are fig trees, vegetable plots, and huge aloe cacti whose rings of yellow flowers at their edges look like the gold-studded earlobes of a green giant. I breathe in the heady scent of lavender and rosemary; wild barley sways in a sudden cooling breeze, purple ‘viper’s tongue’ plants snake their way across the sandy track, and shy rare orchids hide in the scrubland to my side.

Grapes are grown and harvested here, transported a hundred metres across the road where they are pressed and barrelled in a bodega right behind my building, and I can buy five litres of fruity red for five euros.

I cross the road and head for the beach. The sun has already warmed the air. Eight kilometres of uninterrupted pale golden sand stretch ahead of me. Waves caress the spaces in between my toes, nothing but paw prints and bird tracks lie in front of me, and behind me, esparto grass sticks up awkwardly like an adolescent boy’s first stubble. 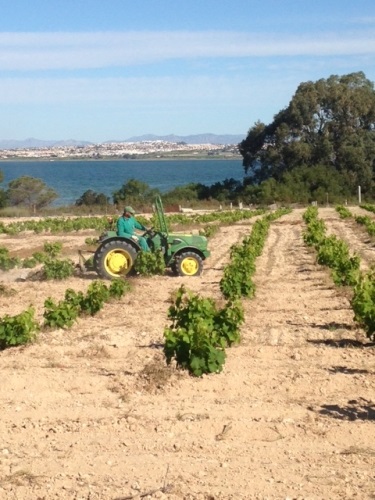 Farmer at work in his vineyard

I turn towards the dunes. A Woodchat Shrike with chestnut brown, black and white feathers startles me as it flaps cheekily across my path. I walk between Aleppo pines; it is difficult to make my way as my feet sink into the soft sand. My little dog runs in circles and leaps with excitement as she tries to toss what feels like powder from in between her claws. We emerge onto a street lined with scarlet, golden and damask pink bougainvillaea and bright orange geraniums.

It’s a Wednesday and market day. Crowds amble past stalls offering flowers, plants, cured hams, vegetables, clothing and footwear. I buy a week’s fruit and vegetables for under twenty euros before approaching the main street. The smell of cigarettes, brandy and coffee emanates from tiny bars; shouts and chatter burst like machine-gunfire above the rustling of newspaper pages being turned. I inhale the aroma of tobacco from the estanco, of musty wine from Simon’s bodega, and of mouth-watering freshly baked bread from the panadería.

By nine I can’t resist this enticing mix and sit at a roadside table for a café con leche and a tostado con tomate on the main street. I can see the local butcher, fishmonger, greengrocer and newsagent opening their doors for the day. The Post Office has already been open an hour and will remain so until eight tonight. I have everything I need within a few minutes’ walk, as well as banks, the tax office, pharmacy, a health centre, hospital, supermarket, tango bar and even a discoteca. There is even a terreno de petanca where I plan to meet up with my cronies when I am old and grey to play the mysterious game with its relaxing clunk when one ball hits another.

Town smells give way to jasmine, privet and stephanotis on my way to the watermill park where I pass some of these older folk resting on the benches, watching children sail boats on the man-made lake; a soothing waterfall gently tumbling from one end provides a light current. I emerge at the boardwalk, the pulse of La Mata, where every day inhabitants and visitors promenade up and down its length, from the oriental-looking bar at one end, past the Jet Ski franchise, a dozen beach bar/restaurants and shops, the main square with its Virgen del Rosario church, the Tourist Information office and Policía Local station, to what I call the ‘Scandinavian end’, where upturned fishing boats rest among the bright red and white plastic tables and chairs of a Swedish beach café, and the boardwalk comes to an end.

Today is a fiesta day. Firecrackers rend the air, destroying the peace of the early evening and rousing us all from our siestas. A procession starts from in front of the church, the devout rocking from side to side under the weight of the holy statue they are bearing aloft. Bands parade the streets where tables have been set up for thirst quenching beers and hunger appeasing tapas. Live bands gather on the embarcadero, a choir begins to enthral its listeners, while on the square, a giant paella is being prepared on a trestle table, and decorated horses give rides around the sports court to children in their best party clothes. 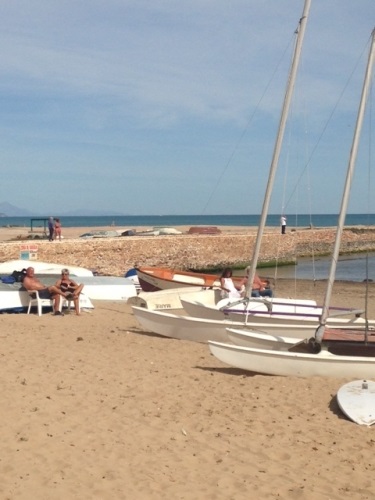 Boats on the beach

Outside the church, a coach deposits a group of jubilados – retired people returning from one of the many excursions which depart from here. They are bubbling with fun and laughter, looking forward to being home for the festivities. All the townspeople can benefit from such trips, and from free yoga, sevillanas dancing lessons, lace-making and other activities in the polideportivo – the popular leisure centre around the corner from my home.

Later on, the unmistakeable sound of flamenco guitars, wailing voices and the intoxicating rhythm of drums draws me outside to watch dancers tapping and clacking and thumping and whirling. I sit on my terrace looking down at the main square, where people are still milling around at two in the morning, carrying tired small children, pushing prams, still chattering and clattering and laughing as they wend their way home through the narrow streets. A heavy full moon silhouettes tiny boats on a sparkling sea; the lights of large ships are strung out along the distant horizon, whilst on the embarcadero with its round watch tower, revellers are still dancing, drinking and laughing on the same place where Romans once disembarked, or set off on their journey homewards across the Mediterranean.

This little town has welcomed not only me, but dozens of multi-nationals, accepted and incorporated by our local friends and invited to share in their way of life. How could I not be in love?