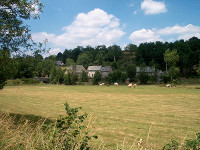 Brittany is quickly becoming one of the most popular areas for expats. Close to the coast and not too far from the English Channel, it’s a convenient residence for UK expatriates in particular, who may want to hop across the Celtic Sea from time to time to visit friends and family. A thriving expat population means that it’s easy to find people who speak English, and winters in the North-West of France tend to be milder than those closer to the Swiss border, where the Alpine winds chill to the core.

The history of this province of France is closely linked with that of the UK; it is often referred to as Lesser or Little Britain, and many of its myths and legends are recognisably Celtic in nature. Indeed, it is considered as one of the six Celtic nations – areas in Western Europe whose original Celtic languages have survived down through the centuries. Brittany’s local tongue is Breton, although nowadays only about twenty percent of the population speak it. We’ve put together a quick history of the region so you can amaze the locals with your knowledge of the area when you arrive. If you’d like to learn more, there are a number of historical tours available across Brittany and Normandy for anyone who’s interested.Brittany has been inhabited for over 300,000 years, and its history has been remarkably well-preserved. One of the oldest kitchens in the world was unearthed in Finisterre, complete with oven and hearth. The historical developments that are still most visible today, however, begin with the production of megaliths in the Neolithic era.

Sometimes defined as the heart of megalithic culture, Brittany boasts hundreds of monuments hailing from the protohistorical period, when five Celtic tribes occupied the area. Noteworthy places to visit include the Carnac stones, the cairns of Morbihan, and Locmariaquer’s Broken Menhir of Er Grah, the largest known Neolithic stone in the world.

In 51 BC, Brittany was occupied by Romans, who built cities and temples, some of which are still visible today. The Temple of Mars in Corseul was founded in 10BC along with a Roman temple sanctuary in Haut-Bécherel. Corseul’s town hall includes an archaeological museum with artefacts dating back to pre-Roman times.

Perhaps the most interesting part of Brittany’s history is its strong tradition of myths and legends. With so many Neolithic monuments and so few surviving Bretons after the Roman invasion, stories sprang up about the origins of the strange stones and dark forests in the Breton countryside.

One of the most well-known of these is the legend of King Arthur, who was declared King of Brittany after the death of his father Uther. The Forest of Brocéliande features heavily in the Arthur and Merlin legends, and a tour around the area will quickly show the reasons why: it’s a place packed with atmosphere. Dolmens – ancient burial grounds in the form of standing stones – are scattered throughout the woodland, and the various areas within the forest have their own evocative names, such as the Val Sans Retour (Valley of No Return) and La Miroir Aux Fées (The Fairies’ Mirror).

At the entrance to the Val Sans Retour is the Arbre d’Or, or Tree of Gold. Created in 1991 after a fire swept through the forest and threatened to devour much of its history, the tree symbolises the fragility of the woodland and nature’s ability to survive catastrophe.

On the other side of the forest, close to the town of Concoret, is a monument called Merlin’s Tomb, said to be the burial place of the famous magician. Nearby is the Centre de l’Imaginaire Arthurien, a museum of legends surrounding the Brocéliande area which hosts frequent family-friendly events such as the “Saturday of Magic” in which local magicians demonstrate their prowess.

No visit to Brittany is complete without a trip along the coast. There are at least half a dozen castles hailing from the twelfth century onwards, some of which are intact enough to walk around, and others which are in ruins but just as striking.

Of course, the myths of Brittany are not confined to the forests: the forty islands in the Gulf of Morbihan appear and disappear depending on the tide, giving rise to much speculation among the early Bretons. This is another area of megalithic beauty, with underground stone chambers, stepped pyramids and the passage grave of Gavrinis, a subterranean cave decorated with symbols and patterns. Tours around the coast and the monuments are available, but many of the most interesting elements are clearly visible and exploration is encouraged.

It is a place of magic and mystery, or just of beautiful forests and a stunning coastline for the more prosaically inclined. Either way, moving to Brittany provides a multitude of opportunities for weekends out, forest treks and subtle history lessons for the kids.