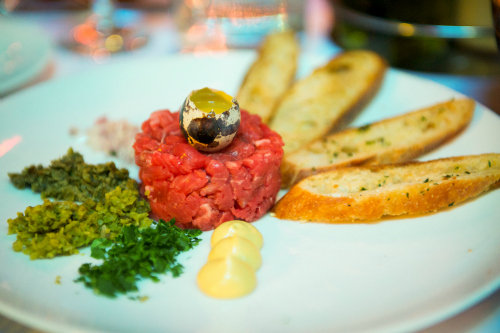 French cuisine has a reputation across the world for being influential on modern Western cuisine, for being some sort of pinnacle of food as art, and sometimes for being plain weird. Even among people who don’t know or care too much about food, the mention of French cuisine will evoke certain ideas and dishes. Whether you think of croissants, bœuf bourguignon, or frogs’ legs, you’ll immediately think of something. Nonetheless, there are plenty of French dishes that remain relatively unknown.Escargots de Bourgogne

This dish is basically snails with garlic butter, along with a bit of parsley, shallots, and perhaps a few more ingredients. Escargot is the French word for snail, specifically a cooked or at least edible snail, and Bourgogne is the French name for the territory of Burgundy, which is associated with plenty of great food and drink, including coq au vin, boeuf bourguignon, and of course many wines. That should hopefully be a good enough recommendation for anyone who’s suspicious of the idea of eating snails.

In case you’re still not convinced, let us mention that a great deal of preparation goes into these snails, even before the cooking process begins. These are farmed snails, and the preparation includes a special diet of herbs, and an elaborate process of cleansing and cooking. For many people though, the joy of this dish is in the sauce, which is mopped up with a piece of bread at the end, while the escargots themselves become almost incidental. However, the meat too is delicious, and many people find that not only does it go down surprisingly easily, but the taste and texture is quite appealing.

Before we get to boudin noir aux pommes, or simply boudin aux pommes, we probably need to introduce the boudin noir itself. This is basically a blood sausage – the phrase literally translates to “black sausage”, and the sausage itself is very similar to black pudding in the UK. In fact, it’s said that the word “pudding” in the name of the latter comes from a mispronunciation of “boudin”.

Blood sausages are part of cuisines all over the world, but each culture does them differently. The blood is always mixed with other ingredients before being stuffed into the gut to make the sausage, and in the French version, these ingredients typically include onions, apples, and cream. Obviously, blood sausages aren’t for everyone. That said, the taste isn’t particularly unusual or intense, and we highly recommend that you try the French version at least once. Just be sure to buy your boudin noir from a charcuterie or butcher, not from a supermarket.

Coming back to boudin noir aux pommes however – this is an exceptional, delicious combination that only the French could have come up with. If you know any French, you will already have realized that the dish consists of these sausages served with apples. Slices of apple are sautéed and caramelized, and served with sausages that have been gently cooked on low to medium heat. The combination of flavors is sublime, and even if you don’t like the idea of blood sausages, you might want to try a bite.

For a change, French cuisine sometimes offers you a toned-down version of a better known but also more extreme dish. But once again, let’s first take a step back and talk about steak tartare, for those who don’t know what that is. It’s a dish that consists of seasoned but raw minced meat, served with shallots, capers and gherkins, usually on rye bread. Sometimes other vegetables may be included, and at other times, the dish may be topped with a raw egg yolk.

It’s actually much more delicious than it sounds, and dishes where the main ingredient is raw meat aren’t as rare as you might think – there’s kitfo and gored gored in Ethiopia, hackepeter in Germany, carpaccio in Italy, and of course sashimi in Japan. As with all dishes that use raw meat, the quality and freshness of all the ingredients is of paramount importance in steak tartare, and if you are fortunate enough to have the dish prepared by a good chef in a good establishment, you’ll be surprised by how much you enjoy the dish. However, in case steak tartare still sounds like too much for you to handle right away, perhaps you can first try tartare aller-retour. This dish is almost identical to steak tartare, except that the patty of meat is lightly seared on one or both sides.

Compared to this sausage, things like frog’s legs, snails, boudin noir, and steak tartare are nothing. The latter may be conceptually difficult to come to terms with, but when you actually eat them, they’re not all that challenging. In fact, some of them are quite delicious, and others can actually be quite disappointing in how ordinary they taste.

Andouillette sausages however are much more formidable. The smell itself, which is said to be because of the use of the large intestine to make the sausages, puts many people off before they can even taste it. Of course, as with all such strong-smelling foods, the aroma of andouillette sausages is delightful to those who love them. The sausages are stuffed with coarsely chopped pork meat, intestines, and onions, with seasoning that includes wine and pepper, and the coarse texture of the sausage is another problem for many people, if they can get past the smell. This one is hard to recommend, except for the truly adventurous.

The taste of sea urchin will be familiar to only a few people across the world. It’s only in Japan that sea urchin has a wide appeal – elsewhere, it’s relatively rare, and often eaten only by specific communities. In France however, especially in the southern parts of the country, sea urchin is extremely popular as a street food, as a quick snack, and even in restaurants. Sea urchins are a bit tricky to eat, requiring considerable care to cut open without either hurting yourself on the spikes or messing up the insides. However, if you’re being served by someone who knows what they’re doing, they’re a delight, with their soft, salty insides.

Probably the best place to eat sea urchin is therefore at a restaurant. However, if you’re feeling adventurous and if you have local friends to help you, you should give it a go at one of the many oursinades, or sea urchin feasts, in the south of France between January and March, where you can buy them fresh, directly from fishermen, and eat them by the sea.

Fromage de tête literally translates to “head cheese”, which is what this dish is known as elsewhere in the world. It’s not actually cheese, but a cold cut made from the flesh of the head of the calf, pig, or other animal. The exact procedure and the parts used vary. Gelatin may or may not be added to help the “cheese” set, and seasonings can include salt, vinegar, chopped onion, and various spices. The tongue and ears may sometimes be included, the brain and eyes are usually removed, and sometimes the trotters or feet may be included. Many people find the inclusion of such parts unappealing, but the fact is that they’re all perfectly edible and even tasty, and throwing them away is an unnecessary waste. The perception of some cuts of meat as “good” and others as “yucky” is relatively recent, and unfortunately, it has made such delicacies hard to find. In France however, you shouldn’t have too much trouble tracking down some fromage de tête.

This is another meat cut that tends to be seen as waste by most people; however, in France it has remained extremely popular. “Ris” is the word used for what people in the English-speaking world usually call “sweetbreads”. There’s a bit of confusion about exactly which organ this refers to, but usually it’s either the thymus gland or the pancreas. The etymology of the word “sweetbreads” is also a bit confused, but probably has to do with the fact that the meat is in fact rather sweet in its taste, at least compared to the cuts that most of us are more familiar with. In terms of texture though, ris de veau is nothing like bread.

If badly cooked, it can be quite unpleasant, but when it’s done well, it’s often described as soft and creamy, a bit like brain but even better. Methods of preparation vary – after the initial, rather elaborate steps that involve soaking, poaching, and removing the outer membrane, the sweetbreads can be fried, used as stuffing, or ground into a delicious pâté.

Whether the quote attributed to Charles de Gaulle is apocryphal or not – “How can you govern a country which has 246 varieties of cheese?” – 246 is almost certainly an understatement. France has at least 500 types of cheese, and some would argue that there are nearly a thousand. Naturally, not all of these get the attention they deserve.

Boulette d'Avesnes is one cheese that deserves a little more attention. This is a soft, creamy cheese made from cow’s milk, flavored with herbs and spices, and shaped by hand into the form of a small cone. The outside of the cone usually has a reddish-orange hue, making it easy to spot and recognize. Boulette d'Avesnes is a slightly stinky cheese with a strong, spicy flavor, but it’s not particularly challenging for most people. Unusually, the drink pairing most often recommended with this cheese is beer, not wine. Of course, not any beer will do – ideally, you should look for a strong, dark French beer. That’s another opportunity to discover a taste you may not have encountered before.

French cuisine is nothing if not well rounded. Along with the meats, cheeses, and everything else they do, the French also do fabulous desserts, some of which are world famous, and others, like this one, relatively unknown outside France. La religieuse (sometimes called La religieuse au chocolat) means “the nun”, because that is supposedly what this stack of two choux pastry cases looks like. We don’t quite see the resemblance, but when something tastes this good, that hardly matters at all. This dessert is a sort of éclair, but it’s almost certain to be better than any éclair you’ve ever tasted. The two pastry cases are filled with either chocolate- or coffee-flavored crème pâtissière, covered with a ganache of the same flavor, and then stacked and decorated. Sometimes a single religieuse comes with both chocolate and coffee, with one choux pastry of each flavor. If you remember the pastry that featured quite prominently in the film The Grand Budapest Hotel, you’ll realize that it’s based on la religieuse. All the more reason to give this dessert a try!

These aren’t exactly a dish, but a kind of confectionary. Cachou Lajaunie are little black licorice and mint lozenges that come in very recognizable metal tins. In France, they’re wildly popular and can in fact be described as iconic, along with their posters and advertisements, but not too many people outside France seem to have heard of them, at least in comparison to other French specialties.

These little boiled sweets are a Toulouse specialty and have a long history, going back to 1880, when they were invented by a pharmacist named Leon Lajaunie and sold as breath fresheners. Lajaunie’s small business very quickly found huge success, and went on to be bought up by bigger and bigger companies. With their unusual flavor, Cachou Lajaunie aren’t to everyone’s taste, and they also have a tendency to leave your mouth black, but if you take a liking to them, you’ll probably always want a tin in your pocket and may even want to collect their beautiful posters.

What are your favourite French foods? Let us know in the comments!