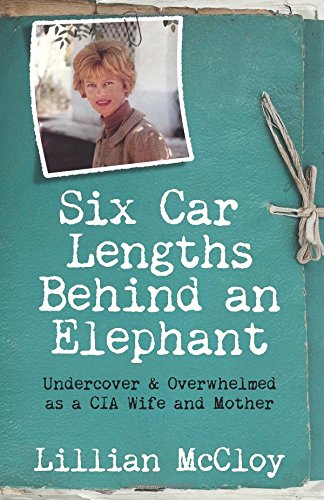 Expat memoirs can be quite hit and miss. While moving abroad is almost invariably an interesting experience for the people directly involved, it can be quite dry to read about. So when expat memoirs drop through my mailbox, I’m not always thrilled to see them.

This one, though, is a definite exception. For one thing, Lillian McCloy is a talented writer. And for another, her story is absolutely fascinating.Six Car Lengths Behind An Elephant follows the story of Lillian, her three children, and her husband Frank. It deals with all the usual aspects of moving abroad – making sure the children adjust to their new schools, sorting out paperwork, trying to fit in with locals and expats alike – but there’s a twist to this book that makes it a particularly exciting read.

You see, Lillian’s husband Frank was a CIA agent under deep cover. When they moved abroad, they had to pretend to be something they weren’t. They had to live a lifestyle anathema to their paycheques and somehow convince everyone around them that Frank was a successful businessman – all on a CIA salary, which isn’t huge.

The story, of course, is compelling. The McCloys’ life under deep cover was one that few of us will be able to relate to, but all of us will be able to appreciate. It’s easy to think of undercover government agents as a sort of separate class of person – people who don’t have any attachments, who are almost automatons. But they have families too: husbands, wives, children, people they care about and must leave behind and lie to.

Beyond the usual concerns about the effects expat life has on children, the McCloys had to try to decide at which age they should tell the children about Frank’s job. This was no small consideration, and any communications about their life in general had to be made with the utmost care.

Yet through it all – through the secrets and lies and webs of deception, through the various challenges of relocating frequently to different countries, some hard to live in – Lillian’s sense of humour and determination to make the best out of every situation shine through.

Some of the things the family had to endure must have been incredibly hard. At times their lives were threatened. At times one or more of them fell ill. And at times there were the kinds of rifts and disagreements that any marriage has – but these were thousands of miles from home, with no friends around with whom the family could be completely honest.

One passage particularly tickled me. In this section, following a suspicion that her husband might be doing something slightly untoward, Lillian describes why she thinks women would make the best CIA agents:

“The CIA should be comprised totally of women, because women can smell intrigue everywhere. We are natural detectives, predisposed to suspicion, as well as unwilling to stop probing until all the details are laid out.

Women will briskly go through the contents of a wastebasket, pants’ pockets, glove compartments, desk drawers, briefcases and even a hairbrush.

They will study a telephone index for numbers with no names, or only initials. They will not hesitate to call a number, fully prepared to engage in conversation with the person who answers. Women can wing it.

Women will study credit card bills and business calendars. They will examine the collars and even the underwear in the laundry hamper. They will smoothly pick up a telephone extension to listen to a call. There is nothing sacred when a woman is “on a mission”.

We stop at nothing. We will dig for details until our teeth itch. We want the pain. We will not be duped. We are born spies.”

The McCloys lived in Spain, India, Japan and Venezuela, always with the children in tow and always making the most of the difficult situations they encountered. Having read many expat memoirs that simply seemed to be litanies of the things people hated about each country they lived in, it was refreshing to read a book that was so balanced. Yes, there were troubles and things that were hard to live with; but there were also good times, humorous events and new friendships and places to explore.

If you’re interested in expat life, or if you just want a glimpse of what it’s like to be married to a deep cover CIA agent, Six Car Lengths Behind An Elephant is definitely recommended.

Six Car Lengths Behind an Elephant: Undercover & Overwhelmed as a CIA Wife and Mother by Lillian McCloy is now available worldwide on Amazon (in paperback or Kindle).