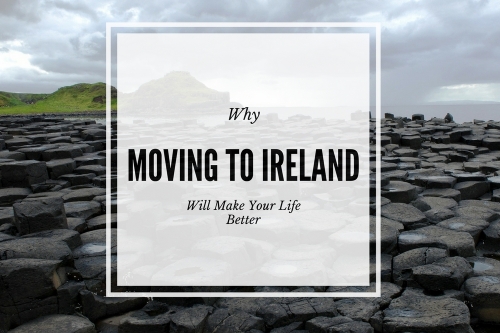 There are many reasons why expats should consider moving to Ireland. They’re thinking about the move not just because the economy is picking up once more but also because it’s a great expat destination.

Indeed, Ireland always ranks well in various expat surveys and consultants ECA International ranks Dublin as the world’s second best city for US expats to live in.In addition, the UN says it’s the sixth joint best country in the world to live in when it analysed healthy and long lifestyles, the standard of living and access to knowledge.

So here’s the Expat Focus list of the nine best reasons why moving to Ireland will make your life better.

Number one: It's a great place for expats

Picking up on the theme of ranking well for the quality of life, Ireland is number one in the ‘Good Country’ index and according to Travel and Leisure magazine has the first, third and fourth friendliest cities in the world. That’s some accolade.

Also, according to Lonely Planet, Ireland is their fifth best country for travel with a lot to offer. It’s also great for business and it tops the Forbes’ list of ‘Best Countries for Business’.

Ireland is also a safe country. Guns are illegal and the police service is relatively small.

There’s also a wide range of housing available for a variety of rents so expats can find what they want at a price they can afford. They should, however, be aware that lots of property was built in the economic boom and a lot of it is still empty.

Healthcare in Ireland is impressively good with public and private provision available. With a range of private healthcare providers, expats can access treatments quickly if necessary.

Number two: It's in the European Union

After Brexit, Ireland may appeal as a destination for British expats who still want to enjoy some of the benefits of being in the EU. Indeed, in the weeks after the European referendum, Irish post offices said they had run out of passport application forms and were dealing with more than 4,000 enquiries every day – mainly from Brits.

Being part of the EU led to Ireland’s economy booming. It was nicknamed the ‘Celtic Tiger’ because it rocketed in size and value between 1995 and 2007 until the global slowdown made itself felt and recession hit.

Today, Ireland’s economy is in good shape and offers a wide variety of opportunities. It appears to be more resilient than it was before and for expats that brings peace of mind. Indeed, Ireland’s population is relatively young which means the country has an energetic and spirited feel.

Expats from other EU countries don’t need a visa to visit, find work and live there. There’s also a favourable tax regime in place for people and businesses who relocate – though the cost of living tends to be higher than many other European countries. Still, it is much cheaper than the likes of New York or London, for instance.

It may also help expats from other EU countries that Ireland’s currency is the Euro.

Ireland attracts lots of businesses from around the world since it has a low rate of corporation tax. Many of the world’s best-known firms have their European base in the country, for instance, Facebook and Google. This brings the opportunity to progress a career with a dynamic, household name.

Ireland has an impressive outdoors lifestyle that will improve the health and well-being of all expats. It helps that the climate is temperate, so while it doesn’t have stifling summers, it doesn’t have harsh winters either.
The country is, as a result, a lush, green and pleasant place to be.

Also, this is not only a small country that’s beautiful to look at but one that has a very good network of roads to travel around. It’s a great location for those who like camping and walking with lots of hiking trails and several National Parks to enjoy.

Expats can rent a car to explore easily – the road network helps plus there are cheap bus and train routes. It only takes a few hours to travel from one side of Ireland to the other.

One of the benefits for expats travelling around is that the people are friendly and often interested in visitors – visit a remote pub and become the centre of attention!

This may be a surprising recommendation but Ireland has an impressive range of delicious food offerings and some excellent local farmers’ markets for quality meat, vegetables and seafood. Regardless of where expats come from, they will find something they love at these markets.

There’s also a lot of wet weather which helps to create a fertile and lush land so grazing cows get to enjoy rich grass and produce creamy milk that helps create lovely tasting chocolate, ice cream and cheese.

Also, expats who enjoy eating out can enjoy a variety of tasty stews and fish pies and a thriving food scene. It will become apparent that the Irish people also enjoy cakes and pastries and the bakeries offer a wide range of tasty treats.

For expats who miss their comforts from home, big towns and cities have a wide range of food stores from around the world, particularly European, so they won’t have to go long without a tasty reminder of home.

Ireland has a thriving culture scene which ranges from art galleries to museums and traditional pubs. Most Irish people are up for a ‘craic’ to enjoy a pint or a good night out. Indeed, depending on the person, there is a style pub that you will love – from music to rowdy, to those that have a few regulars in them.

The country has also produced impressive writers and artists and still offers talented artists today as well as craftsmen who show off their wares and creations in local markets and exhibitions.

With a strong theatre scene, it’s no surprise that Irish actors and also comedians go on to become internationally famous. There is a wide range of plays and musicals to enjoy.

It goes without saying that the country has a lively music scene and music lovers will not have to travel far to find it. This could mean visiting pubs and bars or simply walking along a town or city street since most musicians play everywhere.

There are also lots of music festivals which are not just family-friendly but are a great way for expats to enjoy local talent and appreciate the country more.

Don’t forget too that dancing is a big thing in Ireland and Irish dancing is enjoyed on a regular basis with shows and festivals.

Ireland is proud of its cultural heritage and works hard to maintain it. The cultural scene is best described as ‘vibrant’ which expats will undoubtedly enjoy.

There are also a lot of festivals to enjoy around the country with perhaps one of the world’s most popular, St Patrick’s Day, being celebrated with enthusiasm around the country. Ireland also stages some excellent food and music festivals that manage to showcase the country’s creativity and love of a good party!

There is a lot for expats to do in Ireland and there are plenty of opportunities to enjoy the country’s history and culture. The Irish have a proud heritage to enjoy with books, storytelling and music.

Indeed, the country has an extensive historical past that ranges from ancient man and early Christianity. It also takes in monasteries, stone age arts, fortresses and castles. Those who love castles have a lot to choose from – around 30,000 of them, including ruins, are dotted around the country.

One of the most famous is Blarney Castle and those who visit can kiss the blarney stone at the top and enjoy the ‘gift of the gab’, according to local legend.

Along with its rich history, and Ireland’s love of good storytelling, there’s also an impressive range of folklore and mythology to enjoy which takes in leprechauns and fairies.

The myths also include giant-killing heroes, battles and maidens being rescued.

If we are talking about culture, we should also mention that Ireland has a great range of unique shops and boutiques as well as shopping malls – so there’s a lot of ‘modern’ attractions to enjoy too! Opt to visit or live in Dublin, Galway, Cork or Limerick, for instance, and there’s a great range for shoppers. Plus there are ‘pop-up’ shops and restaurants which will also impress.

For expats who love to take part or watch sport, Ireland offers a wide variety of sports to choose from, including several sports they will probably never have heard of.

Among the most popular sports in the country are rugby and football though Ireland also enjoys horse racing and golf on a large scale. There are some impressive golf courses available for those who enjoy playing and horse racing is a passion in many parts.

Expats who move to Ireland may also enjoy the entertaining sports of Gaelic football, hurling and handball, each of which has passionate support and is popular with local people, even though expats may wonder what on earth is going on! They are, however, very entertaining sports to watch.

One of the big issues for expats moving overseas is the question of education for their children and many opt to use international schools in a bid to deliver quality education.

However, the schools in Ireland are not only free but offer excellent primary and secondary education that deliver impressive academic results. The universities are also very good and rank very well in global league tables.

Indeed, the universities are a popular choice for many people overseas with a wide variety on offer in historic cities. These deliver strong academic performance and expats also get to enjoy Irish culture and gain a degree at a reasonable price. Some expats from the European Union may be able to enjoy free university education under special schemes being offered by the government.

Ireland is an excellent location for those who want to explore Europe during vacations or weekends with very good air links to the United Kingdom and the European Union. In just an hour or so, expats can be exploring another diverse European country with fascinating history and culture.

To encourage this, there are popular budget airlines operating out of the country with rock bottom airfares to help those on a tight budget.

So, we’ve covered nine very good reasons why expats should consider moving to Ireland to improve their life. It should also be noted that the people of Ireland enjoy a good work-life balance with many employers bringing in flexible workplace practices. There are, by law, generous holiday entitlements and these increase the longer an employee works for an employer.

As such, employees get to enjoy four weeks paid leave and eight public holidays, equal opportunities in the workplace and good health and welfare benefits too.

However, no list of recommendations on why to move to Ireland would be worthwhile if it did not mention the people. Many expats will be surprised at how welcoming, warm and funny the Irish people are to strangers. They will find they are approached in pubs to talk about their experiences.

It’s possibly this last issue that is the biggest reason why expats enjoy life here since they will make friends easily. Plus they’ll get to enjoy a wide range of cultural and sporting activities that they would not otherwise experience while having a great time with outgoing people who love to socialise and entertain.