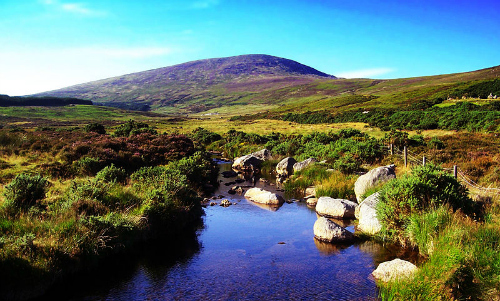 Every year, in the run-up to St Patrick’s Day, there’s a two-week festival called Seachtain na Gaeilge, meaning ‘Irish Language Week’, which celebrates and promotes the Irish language around the country and the world. It’s a great way to celebrate this beautiful language that is unfortunately little used even in its home country.Irish Gaelic is what is known as a Goidelic language that has its origins in Ireland itself. Even among native Irish people, only a small minority speak the language fluently today. Fewer than a million people in the country use Irish as their daily language, but the good news is that this number has been increasing. Around the world, people seem to be taking more of an interest in learning Irish, and sometimes, these are people who have no real connection with the country or the language. However, what’s even better, and more important for the survival of the language, is that more and more people within Ireland seem to be taking an interest in their traditional tongue, beyond simply learning it in school. Although Irish speakers seem to be a declining minority even in the ‘Gaeltacht’ areas – a word used to describe a region where Irish is the predominant language – an increasing number of urban Irish people seem to be learning Irish and taking an active interest in promoting it.

For expats, Ireland is one of the many countries where you don’t absolutely need to learn a new language. In most parts of the country, you can get along perfectly well with just English, even if you have a bit of trouble with some of the phrases. However, quite a few expats develop a love for Irish culture, and this includes Irish Gaelic.

The best way to learn a language is of course to converse with other speakers. However, with Irish, that can be a bit difficult, since native speakers are so hard to find. Here are ten great resources to help you learn the language on your own. Some are free and some aren’t, and some are self-contained while others are either meant to provide support for your primary resource or require additional resources themselves.

A great place for a beginner to begin is with the courses from Bitesize Irish Gaelic. In particular, the Irish for Beginners course is recommendable, partly because it’s free. However, it’s also a convenient and well-designed course that comes to you via email, with step-by-step instructions, simple explanations of grammar, and pronunciation tips, and includes an e-book on the Irish language and a weekly newsletter. Signing up is also simple – you only need to enter your name and email ID on the website. Alternatively, you can start a free trial of their full course on conversational Irish. You need to sign up and log in for this, but that’s all – there are no charges and no credit card details at the start. You can simply do as much of the course as you can within the 21 days that you have free access, and if it’s going well for you, you can then switch to full membership.

Rosetta Stone is a well-known learning tool for many languages. Its reputation is well deserved – the Rosetta Stone courses are generally among the best language courses out there, and the Irish Gaelic course is no exception. Rosetta Stone tends to be a bit expensive, and it can also be quite intense as a learning experience, without the lightness and playfulness of many courses. However, this is not to say that it’s a dull experience. It’s interactive and fun, and a more “natural” way of learning than most language courses. The app or software presents pictures along with words and sentences in Irish, with no English translations. You learn from the context in which the words and sentences appear, essentially immersing yourself in the language you’re learning without the help of your native tongue. Some people find it a bit frustrating, but many say that it’s highly effective.

The Irish Language Synthesiser at abair.ie

Most of us today are familiar with text-to-speech synthesis, although we’re probably not usually aware that we’re using it, since there’s no direct interaction with the synthesis software itself. However, this is the origin of the voice you hear in many elevators and in GPS systems – sentences “spoken” by a synthesizer by putting together separate speech sound units from recordings of real human beings talking. Abair.ie started out as a university research project with the aim of creating a full-fledged text-to-speech synthesis system for the Irish language, which they seem to have done quite successfully. Over the years, they have developed a database of more than 15 hours of recorded speech by two native Irish speakers. The software uses this database to convert the text that is entered into it to speech.

It’s a handy resource for people who are learning to speak Irish without access to native speakers who can help with pronunciation. Simply go to abair.ie, enter the Irish text you want to hear, and click ‘Synthesise’. The Synthesiser creates an audio file, which you can then play as many times as you want to until you learn the correct pronunciation. Like any text-to-speech system, the Irish Language Synthesiser isn’t perfect, but it’s a great free resource for anyone who’s learning Irish without a proper pronunciation guide.

Blas is a BBC Radio Ulster magazine show in Irish, and covers all kinds of topics, from current affairs to sports to music. They also have several courses on the Irish language. The lessons used to be broadcast at the end of the show every Wednesday, and they’re now available for listening or download on the Blas website. Giota Beag is a fifteen-week course covering the basics, and there’s also Beginners’ Blas, which takes a look at grammar, surnames, and more. As you progress through a course, you can also listen to a bit of Blas to see whether you’re better able to understand Irish because of it.

‘Ranganna’ means ‘classes’ or ‘courses’ in Irish Gaelic, and the website is one of the best standalone resources for learning the language. It offers multiple courses at various levels, of which the most useful ones for expats would probably be the Beginners’ and Lower Intermediate courses, along with the quick guide to Irish grammar. The courses have been developed by Gaelchultúr, a company that is based in Dublin and was started by Éamonn Ó Dónaill, one of the best known teachers of Gaelic in the country. The courses don’t require any special software, and run directly off the site, which is extremely user-friendly and can be viewed on a variety of devices. All the courses use a lot of audio and video, with interactive exercises and instant feedback and scoring. There’s also a forum so that learners can interact with each other and with the site facilitators, allowing them to ask questions that may not be directly addressed by the course itself.

This is a CD-and-book combination that comes from Mary McLaughlin, and if you’re musically inclined, it’s probably one of the best ways for you to learn Irish Gaelic. The course consists of 14 songs in Irish Gaelic, for which the book contains the music, lyrics, and chords, as well as translations of the lyrics, instructions on phonetics, and a bit of background information for each song. The CD contains the songs of course, but very helpfully, it also includes tracks of the lyrics being spoken slowly, with pauses for you to repeat each line. This is only a beginner’s resource, but it’s a wonderful way to learn.

Duolingo is another language learning app that has gained popularity in recent years. Apple named it iPhone App of the Year in 2013, and since then it’s only won more accolades. One of the things that’s great about Duolingo is that it’s free, which is surprising considering its quality and scale. Duolingo doesn’t offer a lot of languages, but fortunately, it does offer Irish, which seems to be one of its most popular choices. Duolingo works like a game, making learning a lot of fun with time challenges, duels, a score, and level-ups. It also compels you to log in and practice for a while every day in order to maintain your current level. You don’t need to spend too much time at it – just ten minutes a day should keep you moving along, both within the app and with your Irish skills.

The Pimsleur Method has been around for 50 years, and is pretty much a household name in some parts of the world. Don’t expect a lot of interactivity and games here – this is a serious, audio-focused course, and although there’s an app for it, it’s essentially the 21st century version of a language learning audio cassette, with a few frills. Whether or not this is a good way to learn will probably depend on you. Some people find the Pimsleur Method extremely slow, but others swear by it. The Pimsleur Irish course is rather short and compressed compared to the average Pimsleur course, but it’s a great place to begin.

Clilstore uses a unique and very effective technique to teach language – it’s known as content and language integrated learning (CLIL), and Clilstore hosts a range of CLIL resources for many different languages. The idea is that the best way to learn a language is not through teaching materials but through actual, real-world resources, especially on topics that already interest you. This would be the rough equivalent of learning a language by watching television or reading books in that language, except that here you have access to transcripts and online dictionaries. Interrupting a piece of video or text to look up words in a dictionary can be rather tiresome, but Clilstore offers tools that make this almost painless. This isn’t something you can use as your main resource, and it’s probably a bit overwhelming for beginners, but once you have a level experience, it’s a great supplementary tool. Clilstore currently has over 130 titles in Irish, and the list is constantly being updated.

‘An Grá Faoi Ghlas’ isn’t for beginners, but once you’ve got your basics in place, you can give it a try. This is a video series created with Turas Teanga, and it features people speaking various Irish dialects in a Big Brother type setting. The level of the language is fairly basic, and everyone speaks at a comfortable pace, so you don’t need to be completely fluent to understand or enjoy the show. It’s easy for anyone at the intermediate level to understand even though it’s all in Irish, including the subtitles. You’ll find glowing recommendations of the show among the small online community of Irish learners. You can watch the series for free online.

Have you learned Irish Gaelic? Which resources did you find useful? Let us know in the comments!