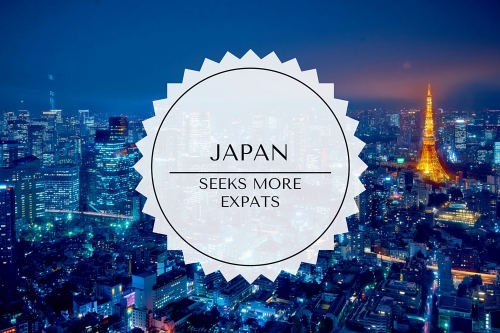 The Land of the Rising Sun was once a shining beacon of high-tech innovation with an economy that burned brightly. Sadly, this has not lasted. After the boom, the inevitable bust has lead to a long-lasting decline.Putting the complexities of international economic processes aside, the Yen has faced inflation crises and there have been big scandals about executive corruption in flagship corporations. But the biggest problem facing the Japanese economy is simple: it doesn’t have enough home-grown workers. To find the solution, the government may now be looking overseas.

Japan’s aging population is placing a huge burden on the state and the next generation of workers is simply not big enough to keep the wheels of business turning. A survey by recruiter Manpower showed that 81% of Japanese employers struggled to fill roles within their businesses, more than double the global average.

With more employers retiring out of the labour pool than new starters joining it, this ‘demographic labour shortage’ clearly spells disaster for the long-term. One study (Kobayashi 2009) projects the labour shortage may equate to 8 million workers by 2025.

Getting bums on seats is not enough for employers, they need to get the right people with the right skills into the right job. In this aspect too, the Japanese job market is fighting a losing battle. Known to researchers as “labour market” shortages, the potential workforce just isn’t equipped with the skills that businesses need. Applicants are each applying for hundreds of jobs and having very little success in making the grade.

The economy is continuing to slow further as projects stall due to a lack of skilled personnel; this has even delayed reconstruction work following the 2011 earthquake. The nation’s flagship project, the 2020 Tokyo Olympics, could be in jeopardy as the construction industry faces a shortfall of 230,000 workers in 2015.

The workforce looks set to continue shrinking as the elderly continue to live longer and the birth rate continues to drop. Fiscally, only the most optimistic projections forecast growth for the economy as a whole.

It may seem odd, given the dire need for workers, that only 66% of working age women are in the workplace. This statistic may seem relatively high, indeed it is higher than Italy and not far off the UK or USA, but when nearly 85% of Japanese men are employed, it’s a shocking gender gap. The women of Japan are just as educated and motivated as the men, but tradition made it almost taboo for married women to remain in the workplace.

Consequently, the choice between career and family is acute for Japanese women, meaning only a few resist peer pressure and forego marriage in favour of a career. Noriko Takeda, a woman who worked at a trading company, told Financial Times, “Until I was in my final year of university, Japan seemed fair. Then I started applying for jobs and it hit me how completely they destroy your chances.”

Indeed, many regular practices in Japanese workplaces have been openly sexist. “I did best out of everyone on the language test and they gave these jobs to boys who couldn’t get an English sentence out,” said Takeda “One of the questions they asked at interview was ‘are you planning to have a baby?’ That would be illegal in a lot of countries.”

Even with these measures in place, there is a lot that needs to change in Japanese culture and simply changing the law won’t do away with decades of entrenched discrimination. Even with labour laws prohibiting it, Japanese workers often work 60 hours a week, which is clearly incompatible with caregiving and childcare. Maternity harassment – bosses demanding to know employees – family plans, is so common that is has been abbreviated in common parlance to ‘mathara’.

Older workers have also been thrown a potential lifeline by similar legislation, ending what used to be a mandatory retirement. Experienced employees now have the legal right to continue working after statutory retirement age, but working culture has been slow to adapt.

With attempts to handle the employment crisis in-house falling flat, the government has been forced to look outside Japan in order to fill the gaps.

Japan has traditionally been something of a closed shop, being wary of hiring overseas labour, however dire the need. Currently the expat population stands at less than one million, in a country of over 127 million.

This tiny fraction of the workforce has been made to feel slightly more welcome by legislation that passed last year, allowing foreign nationals in managerial positions to remain in Japan after their fixed-term visas expire.

A government committee was established to review the labour shortage with a view to relaxing the rigid immigration laws. This is a risky political move as, despite obvious need, Japanese residents are wary of immigrants snapping up jobs. In one government poll just 12% of respondents felt there should be more foreign workers.

This strength of feeling has led government sources to announce that official policy is ‘no immigration’, whilst simultaneously encouraging big business to recruit foreign workers. One scheme which has been revitalised by this is the Technical Internship Training Program (TITP). TITP was launched in the 19990s in order to help neighbouring developing nations to develop technical skills.

Under the initiative unskilled workers would undergo training in technical subjects whilst being available as a pool of labour to Japanese companies. Despite spending long hours working on factory floors, these foreign workers were never classed as anything but temporary trainees, allowing the government to deny their existence in the workplace and permitting employers to pay dismal wages. Yoshio Kimura, a politician in the upper house of parliament, ridiculed the contradiction. “They are, in reality, foreign labour, but the government keeps saying they are not,” he told Japan Times, “it’s almost equal to pretending crows are white.”

The committee appointed to review the situation is yet to report back, but early rumours suggest that TITP will be expanded and skilled foreign workers will be offered easier terms of entry alongside a longer five-year visa.

Other announcements have proposed scrapping the term ‘unskilled labour’ from immigration legislation, opening the door for the low-skilled workers and labourers so desperately needed. Foreign workers with few qualifications could be steered towards roles in construction, care and farming.

Skilled workers are also getting a boost, with top flight companies pledging to increase recruitment of foreign nationals. Until recently Japan’s small and medium sized enterprises (SMEs) had been the biggest employer of expats, with the big boys favouring local talent.

Now though, the likes of Hitachi, Fujitsu and convenience store chain Lawson are actively seeking out talent from overseas. These three big players have each announced that between 10 and 30% of next year’s intake onto their graduate employment schemes will be foreign-born. Japanese companies are also reviewing their working practices and compensation packages in an effort to make themselves more appealing to foreign nationals.

Whilst these changes represent a definite change in attitude toward overseas workers, these same companies are still sticking with tradition in many respects. These new hires are being plucked from the ranks of students at Japanese universities, often tested, interviewed and offered conditional spots during their first years of study.

This style of recruitment not only mirrors the process aimed at hiring Japanese talent, but seeks out foreigners who have already developed a link to Japan. Other proposals would allow for renewal of visas without granting full citizenship, which would allow foreign workers to be categorised as something other than controversial immigrants.

Japanese employees could once count on a job for life, giving rise to a massive middle class of ‘salary men’ secure with reasonable incomes and a host of benefits. The current generation of workers is facing a rising level of economic uncertainty and employers unwilling to take risks on the unknown. Only the cream of the crop are offered jobs from each year’s clutch of graduates, the rest are often left to struggle in temporary jobs with low pay, no benefits and limited employment rights. Despite this new reality, much of Japanese culture remains stuck in the past.

Parents find it hard to understand why their children struggle to find work when it was so easy for them, whilst the nation as a whole struggle to accept that changes need to be made. Even where legislation is pushed through to alter the letter of the law and make positive changes, many employers elect to ignore them without fear of reprisal.

One proposal suggests that the number of working foreigners should be doubled, but job hunting in Japan requires you to already live in Japan and be fluent in the language, a major obstacle to most of the potential talent pool.

It’s true that Japan is seeking the expats it so desperately needs, but at the same time it is doing everything it can to deny the fact. There are no schemes in place to help new arrivals learn the language or to simplify the complicated visa system.

Japan is looking for expats to commit to a life in Japan, but is asking for a lot from them up front. Whilst there are targets and proposals in the air, nothing concrete has yet been unveiled that will make the deal more appealing to the majority of potential expats.

Have you lived and worked in Japan? Share your experiences in the comments!