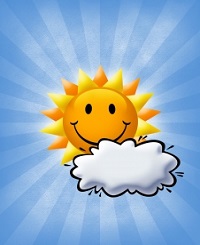 The Southern European island of Malta lies almost in the center of the Mediterranean Sea and is about 60 miles from the island of Sicily. Malta receives nearly 5.2 hours of sunshine every day, even during the month of December. The daytime temperatures sometimes reach 21 degrees Celsius throughout November. Springtime begins in late February. Malta is not a place for snow or frosty weather. There is some rainfall, especially during winters, and this is manifested in heavy short showers. Due to the sunny weather, Malta is a popular place for outdoor activities such as sailing, diving, horseback riding and golf. It also has an active cultural scene and in the cooler months, residents and visitors often flock to the Manoel Theatre, the second oldest theatre in Europe, which is the place to go for opera, ballet, music and theatre.Malta has what is called Mediterranean weather and this is one reason why the island is so popular with visitors. But the weather can be unpredictable sometimes. November may see a warm spring-like climate, with no cloudy skies or winds. Afternoons especially can be hot during this time. Malta can also get quite cold with chilly winds since the island is exposed to the fierce storms that occur over the Mediterranean Sea. Many of the older houses do not have sufficient heating to tackle these uncomfortable cold days and you may find that it is colder indoors. Here are some ways in which you can prepare for the climate in Malta.

Clothing
The dress code in Malta is relaxed for the most part. People don’t usually dress up too much unless the event especially calls for it. Fine dining or business events may require more formal attire. If you are invited to someone’s house for dinner, you may want to dress up a bit. Carry a scarf or cardigan along for those unpredictable cooler days. It may not seem like island attire, but do remember to take some warm clothing with you. You will need these during the nights, when the weather can get chilly and damp. Also take some waterproof closed footwear as sometimes the humidity can climb to 90% due to the sea fog. Another useful tip is to take some natural fiber clothing that can keep you comfortable during hot days. Dressing in layers is a good way to prepare yourself for the changing weather patterns during the day.

Health
Malta can be warm and sunny one day, and humid and wet a few days later, making it an ideal breeding ground for allergens. Molds in particular are common in regions with such weather and are usually found in dark, moist places. Molds are the reason many people have asthma or sinusitis bouts. But even the pleasant sunny weather can be frustrating for those with allergies. Pollen can trigger allergy attacks and lead to uncomfortable symptoms like sneezing, runny nose, stuffiness and itchy eyes. If you are taking any prescription medications for allergies, remember to fill them before you arrive in Malta. Over-the-counter medications are also helpful in alleviating allergy attacks. Depending on what triggers your allergy and in which type of climate, you can stay prepared by taking the medication before the symptoms occur. It is easier to prevent an allergic reaction than stop it once the symptoms have already begun.

Downpours
Summers in Malta witness hardly any rainfall; in fact the average rainfall in July only reaches 1mm. But expats should be prepared for the tropical downpours in October, when the average rainfall goes up to 5 inches. The streets can flood during this time and sometimes cars can even get washed away. Since Malta is a part of the Euro Zone, it is now complying with European flood prevention practices and there have been improvements over time. It is a good idea to check the weather updates before going outdoors. An even better idea is to check with some locals about which streets are prone to flooding and are best avoided during rainy days. Also keep an umbrella handy. It’s a good way to protect yourself if you’re caught in a downpour, even though it might just turn inside out due to the forceful winds that Malta often sees on rainy days!