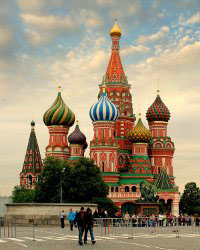 Moscow is often called a city of great contrast. It has seen rapid development and has grown into a major hub for business and tourism. It also holds on to a rich past that is evident in its many ancient monasteries that stand alongside its skyscrapers. It is considered to be one of the world’s most expensive cities, yet it continues to become the home for numerous expats stationed in Russia.

Safety in Moscow has improved considerably over the years, but crime still remains an issue. There are daily reports of theft, pickpocketing, burglaries and vandalism, and in most cases the victims of such crimes are tourists, on account of the fact that the city is major tourist destination. But its also important for expats to exercise caution while living in Moscow, as it could very well keep them from getting into risky situations.Neighborhoods in Moscow cannot really be classified as good or bad, in terms of crime and safety. In general, it is advisable to avoid going to train stations at night. Expats already living in Moscow often caution against being around stadiums at night, especially when there are major football matches taking place. Also refrain from visiting the more deserted parts of town after dark. Some places may not have adequate street lighting, which may make it difficult for women to feel safe while they’re out on their own in the evenings.

In many cases, foreigners end up becoming the targets of various scams. It’s important to be alert to any sign of this, and if you notice money on the ground or if someone approaches you with money, it is advisable to move away from the area without picking up the money or entering into any conversation with the person. Say Nyet (No) firmly and audibly, and carry on. If a plain-clothed individual stops you and indicates that you may be part of the scam, ask to see his identification.

Avoid using unofficial taxis, as there have been reports of theft and assault committed by drivers of such taxis. Also avoid getting into any taxi that is already carrying passengers. The law prohibits the operation of unregistered taxis, but there are some who flout the rules. At airports, you can go to the Taxi Desk near the exit, where you can get a taxi at the official rate. There is also the Airport Express Train, which takes you downtown, where you can get a taxi. This will be cheaper and will also help you avoid the traffic snarls along the way.

Safety at home is also essential. If there’s someone unfamiliar at the door, always ask who it is first. The Russian way of doing this is to ask Kto tam? (Who’s there?) Make sure your door has a spyhole, so you can see who is outside. If you’re still unsure, do not open the door until you think it through. Electricity and water meters are typically fixed outside the apartments, and hence officials who visit to read the meters do not call on residents. Apartment complexes in Moscow usually have steel doors that operate electronically. This automatically serves as a barrier to unwanted callers. The door works on an intercom or domophone system, and you can unlock it using a code. In some cases, residents need to use magnetic keys to unlock their doors. Older buildings may still use code locks wherein you can unlock the door by pushing three buttons. VIP buildings have a professional security guard or Okhrana, whom you may have to inform in advance if you’re expecting any visitors.

Keep your travel documents with you at all times. Foreigners need to have their original passport with their Russian visa, as the police have the right to check them at any time. You may be liable to pay a fine if you are unable to produce the documents when asked by a police officer. You may also need to show your passport as identification when entering many official buildings, including some banks, and also when making credit card transactions. In case your visa is being registered, the agency handling the registration needs to provide you with a document bearing their official seal, which states the date on which your passport will be returned to you.