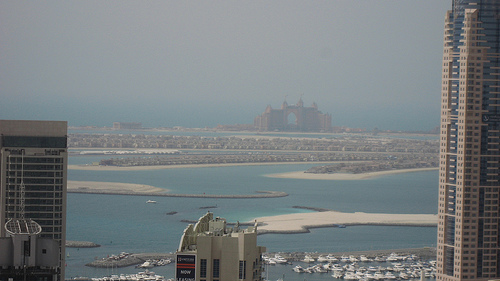 The UAE is one of those places where knowing the local language is not terribly important for expats. Even for expats who are eager and willing, there just isn’t much opportunity – you might somehow begin to learn the language, but you’ll find there’s almost no one to practice with. For most expats, interaction with the locals is minimal, and when it comes to languages, formal training alone, without any real-life practice, doesn’t get you very far.Nevertheless, you never know when you’ll find yourself in a situation where you need some Arabic. Keeping that in mind, here are a few basic phrases that you might someday find useful.

Hala. This is a casual, friendly way to say “Hi!” to someone in Arabic. It’s not terribly useful on the street or in the market, but if you have Arabic-speaking friends, they’ll definitely appreciate the effort.

Assalam Alaikum/Walaikum Assalam. This is another Arabic greeting, one that’s slightly more formal and can be used in a variety of situations, including with strangers. Ideally, you should know both parts of the greeting – the first person says, “Assalam Alaikum!” and in response, the other says, “Walaikum Assalam!” In English, this would mean “Peace be upon you!” and “Peace be upon you too!”

Masalamah. This is another phrase that won’t really help you have much of a conversation in Arabic, but it’ll leave a good impression and get you points for trying. Masalamah simply means goodbye – there are other words with roughly the same meaning, but this one is probably the shortest and simplest to learn. (You’ll also know exactly what they mean when expat friends tell you they’re having a masalamah sale.)

Maafi Mushkil. This is a useful one to have in your repertoire – it means “No problem”. If you make a request of someone and they answer with “Maafi mushkil!” you know they’ll do what you’ve asked of them. Similarly, if someone thanks you, you can reply with “Maafi mushkil.”

Ahlan Wa Sahlan. It’s difficult to explain this one literally – in Arabic, this phrase has connotations of hospitality, family, acceptance, and sharing – but essentially, what it translates to in English is “welcome”.

Shukran. This means “thank you”. You can also combine it with “La”, which means “no”, if you want to say “No, thank you.” Simply say, “La, shukran.” (A quick tip: The previous phrase, Ahlan wa sahlan, isn’t appropriate as a response to shukran. It means “welcome” specifically in the context of hospitality, for example, when welcoming someone to your home.)

La afham. This one can be useful when you meet someone who seems to only speak Arabic. It means “I don’t understand”.

Titakkellem ingleezi? This is another useful phrase when you’re having trouble communicating. It means “Do you speak English?” Shopkeepers, especially in the bigger stores (but often even in the souks) know English and will tend to speak to expats in English. However, just in case they don’t, this and the previous phrase will help you to convey the fact that you don’t understand Arabic.

Addesh? If they don’t speak English and you don’t speak Arabic, you don’t necessarily need to leave the store, especially if you’ve found something you really love. You can give it one last shot with “Addesh?” which means “How much?” The price of course still needs to be communicated (and probably haggled over), but that will usually be done in English, and even if it isn’t, it’s not too difficult to communicate numbers with your fingers.

Wayn al hammam? “Where’s the toilet?” Again, you’ll almost always be able to ask this question in English and be understood, but if you’re ever in a situation where everyone around you speaks Arabic, this phrase will be extremely useful.

These phrases should be adequate for most expats in the UAE for the entire duration of their stay there. Unfortunately (and fortunately, if you find it difficult to pick up new languages), it’s possible to live in UAE for years and rarely interact with the locals. Those you meet in shops and markets are quite likely to speak English. The rest of the people you meet will be other expats, most probably from your own part of the world. The most commonly heard foreign languages apart from English are probably Hindi and a couple of other Indian languages.