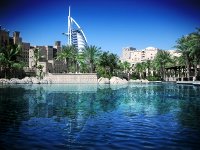 For those with an eye and ear on international affairs, the very word ‘Dubai’ can conjure up images of an extravagant, hyper-modern dreamworld, defined by its bold “science fiction now” innovations in architecture and landscaping. Of course, there are certain lightning rods for attention, like the new underwater Water Discus hotel being developed by the state-owned Dubai World holding company, as well as the notorious Burj Al Arab hotel, which help to fuel this preconception: the latter hotel is often touted as “the world’s only 7-star hotel” (despite “5 star deluxe” being the highest official rating given by the hospitality industry), boasting suites of two floors each.

Other much-discussed features of the local landscape include the manmade Palm Islands archipelago, in the midst of which another archipelago is designed to appear like a microcosm of the globe’s continental land masses. With items like these in mind, it’s understandable why many expect the whole of Dubai, including its residential areas, to live up to this standard of novelty and luxury.The more famous features of the local landscape may be exceptions to a rule of sorts, but not by that much; and neither is Dubai laid out like a Brazilian mega-city in which shantytowns sidle up right next to modern tower complexes. Given that Dubai ranks as the 22nd most expensive city in the world, real estate here is at a premium and a mushrooming tourist industry – being lavishly funded in order to prevent Dubai from becoming another entirely oil-dependent Middle Eastern economy – guarantees that the price of temporary residences or rentals will remain high for a few years still.

The Dubai Marina is a high-rise populated, ultra-modernist waterfront district touted as the epicenter of the “new Dubai” (though it is still situated in close proximity to the more villa-rich Springs, Meadows and Lakes neighborhoods.) As can be guessed merely by looking at pictures of the environment, virtually all daily amenities can be had here from fine cuisine and walks on the nearby Palm Jumeirah beach to (especially important for those averse to driving) service by multiple metro stations. Some therefore see the Marina district as a good point of entry for younger professionals without families in tow (many studio apartments are available here in addition to penthouse apartments and condominiums.) For those who are moving with families, the unavailability of primary and secondary schooling nearby might present a bit of a problem, as may the lack of clinic and hospital facilities.

Palm Jumeirah (forming part of the island archipelago mentioned earlier) is another highly coveted residential district within Dubai: despite only being a few minutes’ drive away from the city’s financial centers, it is still considered to be at a safe remove from the congestion and noise levels normally associated with the urban core. It is one of the few such communities in the world served by monorail transport (the monorail line is cleverly placed along the “trunk” of this archipelago’s “leaf” pattern), while generous, orderly arranged beachside villas populated the “fronds.” The unavailability of retail and leisure time venues in the immediate area is gradually being dealt with, though anyone who has spent time in a large metropolitan area may not find it inconvenient at all to spend the extra few minutes to take care of shopping in Marina. For expats wishing to ‘go native,’ this neighborhood may also provide a healthy medium in that it is neither a ‘refuge’ of foreigners from Anglophone countries, nor a stronghold of the locals.

While it is possible that the cost of local accommodation may be borne by one’s employer (more likely for those not planning on becoming permanent residents), rental costs in the area are not exorbitant when compared to those of, say, Californian hotspots like Berkeley or West Hollywood. A one-bedroom apartment within Dubai will cost around $25,000 USD per annum, with a two-bedroom apartment climbing into the $35,000 range (with full furnishing only included in some cases.) Incidentally, accommodation, whatever neighborhood one finds it in, is often cited as the most expensive aspect of life in Dubai, with other aspects compensating for this somewhat. Many daily amenities in Dubai, particularly foodstuffs and designer label clothes, are cheaper than in the metropolitan hubs of the U.K. or U.S. – so this is something to consider when weighing the cost of housing in the area.

For those who are not considering an immediate relocation to Dubai (i.e. prospective expats who plan on moving there a year or two from now), it should be noted that the construction and development in Dubai can proceed at a furious pace, meaning that there may be much more to choose from in the way of residential property once you have made your decision to relocate.

As of 2008, in fact, it was estimated that some seventy-five percent of the world’s cranes were being mobilized for construction projects within Dubai. Public opinion differs as to whether residential construction in Dubai has ‘peaked’ or not yet, and so if one’s plans may be to relocate to the country within a few years’ time, it would be best to initiate conversations with those expats currently in Dubai who do not have a vested interest in either promoting or criticizing the area.