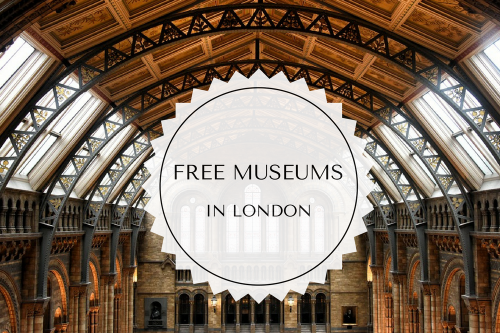 Take advantage of free entry to a wide variety of London’s iconic museums and explore the famous city’s rich culture and history on a shoestring budget. Here are ten of the best museums in London that you can check out even if you’ve left your wallet at home.British Museum

Situated in the Bloomsbury area of central London, the British Museum houses about 8 million works devoted to human history, art and culture. This impressive collection is one of the biggest and most extensive to be found anywhere, featuring exhibits from all parts of the world and documenting human culture from its earliest times to the present day. It has a total of 94 galleries that are divided by location and periods in history (e.g. Ancient Greece, Roman Britain, China from 5000BC, and so on) giving guests plenty to see on multiple trips. It attracts close to 7 million visitors every year, making it the most visited museum nationally and amongst the top five globally.

The museum was originally established in 1753 based on the collections of the British naturalist and physician Sir Hans Sloane, and opened its doors to the public for the first time in 1759. In the two and a half centuries since, its expansion reflected growing British colonialism and included the additions of significant finds by many explorers both overseas and locally. Some of the most notable of these include the Rosetta Stone and the Parthenon sculpture (from Ancient Egypt and Ancient Greece respectively).

The British Museum is free to visit and open daily, with the exceptions of 24, 25, 26 December and 1 January when it is closed.

Located in Trafalgar Square in the heart of Central London, this famous art gallery is home to a vast collection of over 2,300 paintings dating from the 13th to the 20th century. The works of renowned artists like Botticelli, da Vinci, Rembrandt, Van Gogh, Renoir, Turner and Gainsborough are all on display for visitors to explore.

Originally established in 1824, the National Gallery first consisted of 38 pictures and gradually expanded from there. It attracts around 6 million visitors annually, making it among the top three most-visited museums nationally, and the fourth most visited art museum globally (following the Musee du Louvre, the British Museum and the Metropolitan Museum of Art). It is open 361 days a year and is free of charge to visit, though from time-to-time certain exhibitions, music concerts and courses may have an entry charge.

There are also free talks every day, which do not require an advance booking, focussing on a different painting or subject each time. In addition, free workshops are available for families on Sundays and holidays giving young children (ages 5-12) an opportunity to participate in creative and artistic pursuits while experiencing the grand gallery atmosphere.

Located in the South Kensington area of London, the Natural History Museum displays around 80 million life and earth science specimens, spanning across billions of years. There are five main collections: zoology, paleontology, botany, mineralogy and entomology. The free-to-visit museum and science research centre was established in 1881 and now welcomes over 5 million people annually.

Perhaps the most famous exhibition here is the collection of dinosaur skeletons, including the iconic cast of a Diplodocus which dominates the full length of the vast entrance hall. It also has the most complete Stegosaurus fossil to be found in the world and a number of animatronic dinosaurs such as the hugely popular Tyrannosaurus Rex.

More recently they have added the Darwin Centre, where a self-guided tour will take you past hundreds of valuable specimens and state-of-the-art laboratories where the museum’s research scientists are hard at work. It also has the world renowned Natural History Museum Library containing a comprehensive collection of valuable books, journals, manuscripts and artworks that can be viewed by making a prior appointment. The museum is open to visitors daily, except for the three days when it is closed (24-26 December).

Also situated in South Kensington is the world’s largest museum of decorative arts and design, the Victoria and Albert Museum, usually abbreviated to simply the V&A. Named after Queen Victoria and Prince Albert and established in 1852, the V&A’s permanent collection houses close to 2.3 million items spread across 145 galleries that span over 5,000 years. The diverse holdings include ceramics, jewellery, photographs, fashion, furniture, sculptures, textiles, paintings, glass and metalworks from all parts of the world.

Some of the museum’s highlights are the finest Italian Renaissance collection of sculptures outside of Italy; the Jameel Gallery of Islamic Art which includes the magnificent Ardabil carpet, the world’s oldest floor covering; Raphael cartoons from 1515 which were painted as Sistine Chapel tapestry designs; the Luck of Edenhall, a 13th century Syrian glass beaker; and a famous photography collection of about half a million images.

The V&A has been free to visit since 2001 and since then has undergone extensive renovation work including the addition of newer galleries, gardens, shops and other facilities for visitors. The 17th and 18th century European galleries opened in December 2015 and restored the original architectural interiors of the museum. The V&A is open daily and closed 24-26 December like other national museums.

The National Maritime Museum is based in the heart of Royal Museums Greenwich, and includes iconic sites such as the Queen’s House and the Royal Observatory, both situated nearby. It was opened to the public in 1937 by King George VI and is the world’s largest maritime museum. Greenwich has been at the centre of Britain’s maritime history since earliest times, and the museum’s collection of over 2 million items represents this long association with the sea and navigation.

The ten free galleries in the museum allow visitors an unparalleled look at innumerable artefacts, manuscripts, maps, models, charts, maritime art and memorabilia that reflect Britain’s rich history at sea. Historic pieces on display include the uniform worn by British hero Admiral Horatio Lord Nelson when he was fatally wounded during the Battle of Trafalgar; a section dedicated to Captain James Cook and his North-West Passage expedition in the late 1700s; an exhibition related to the trade history of the East India Company; and a gallery named Forgotten Fighters, recounting tales from World War I naval battles. There are also interactive galleries designed for toddlers and children, making it a great place for families of all ages to visit.

Tate Modern is Britain’s national gallery of international modern and contemporary art, based in the former Bankside Power Station on the banks of the Thames in the London Borough of Southwark. It is one of the world’s biggest museums of modern and contemporary art and attracts close to 5 million visitors every year. Its vast holdings include a British national collection that goes all the way back to 1900.

Nearly 20 years after the Bankside Power Station closed in 1981, it was redeveloped and opened as a modern art museum in 2000. It retained much of the internal structure, including the original cavernous turbine hall which extends across the length of the entire building. To accommodate the larger-than-expected number of visitors it was attracting, various extension projects were planned in order to increase the display space. ‘The Tanks’ was one such phase of expansion which converted large subterranean oil tanks into areas that stage performance and film art.

Tate Modern’s world-class permanent collection is free for visitors to view and boasts work by famous artists such as Cezanne, Picasso, Matisse, Dali, Warhol, Rothko and Louise Bourgeois amongst others.

Founded in 1857 in South Kensington, the Science Museum is the most visited science and technology museum in Europe attracting over 3.3 million visitors every year. It has seven floors that feature a number of educational, interactive and entertaining displays that reflect the sheer magnitude of scientific, technological and medical change since the 18th century.

The museum’s extensive collection includes world-famous objects such as the Apollo 10 command module, Stephenson’s Rocket, Puffing Billy (the oldest existing steam locomotive), the first jet engine, and some of the world’s earliest remaining steam engines. Interactive galleries bring life to the earliest scientific principles and modern science arguments, while 3D and 4D simulators allow you to rocket into space on an Apollo space mission or experience flight with the Red Arrows (the Royal Air Force Aerobatic Team).

There’s something to be found here for every age group, from the adults-only Dana Centre which has free lectures and performances on contemporary scientific issues to the Pattern Pod and Launch Pad where children can discover basic scientific principles. There’s also a massive IMAX cinema showing 3D science films, but which may require the purchase of tickets. Most of the museum is free for visitors and open daily.

The Imperial War Museum in London was originally established in 1917 to document the war efforts and sacrifices of the British Empire during World War I. Since then, the museum’s scope has extended to include all conflicts involving British or Commonwealth forces since 1914. In 1936 it moved to its current Lambeth Road home in Southwark, in what was previously the Bethlem Royal Hospital.

The museum reflects people’s experiences of modern war from World War I to contemporary times, through vast collections that include personal and official documents, films, photos, oral recordings, military vehicles, aircrafts, equipment, an extensive library and other various exhibits. The Central Hall features numerous artefacts like guns, tanks, medical equipment and aircrafts hanging from the ceiling, covering conflicts from the Falklands to Afghanistan.

Extensive World War galleries give way to darker themes as you move upwards, through the Holocaust Exhibition to a display called Crimes Against Humanity (not suitable for younger audiences), exploring genocide and ethnic violence in more recent years. The Imperial War Museum London is free to visit and is open daily from 10AM to 6PM, attracting close to a million visitors annually.

The National Portrait Gallery was the first of its kind when it opened back in 1856, and it moved to its current home at St. Martin’s Place, off Trafalgar Square, in 1896. Today it houses over 200,000 portraits dating from the 16th century to the present day, created in a wide array of mediums such as drawings, paintings, photographs, caricatures, negatives, miniatures, sculptures and prints amongst others. The subjects include some of the most significant and famous people in British history, from royalty to musicians and movie stars.

One of the gallery’s iconic images is the Chandos portrait, the most famous portrait of playwright William Shakespeare, although it hasn’t been definitively proven that it in fact depicts the writer. Aside from the permanent collections, the National Portrait Gallery also hosts various exhibitions and free events, and has a rooftop restaurant with breathtaking views of the London skyline.

Attracting over 2 million visitors every year, it is one of the most popular museums in the country and charges no admission fee.

Established in 1976 on London Wall (as part of the Barbican Estate), the Museum of London has nine free galleries that document the history of the famous city from prehistoric to contemporary times. It has the largest urban history collection in the world with over 6 million objects on display, and attracts more than a million visitors annually.

The galleries are organised chronologically, taking you from prehistoric times, through those of Roman and Saxon rule, to medieval London, tempestuous times of civil war, plague and fire, to galleries where you can walk through recreated streets and gardens of modern and Victorian London. Additionally, you can view original artefacts uncovered by the museum’s archeological digs and also discover the rich history of London’s social and cultural life, with interactive exhibits and activities suitable for all age groups.

The museum is open daily from 10AM to 6PM, and visitors can join free daily highlights tours as well.