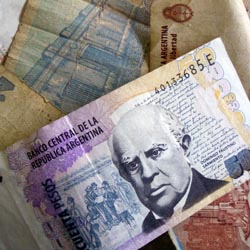 Living in a cashless society where cell phones and plastic are the only forms of payment seems nearer than ever. Or at least, it does if you live in the West.

But over here in Argentina, it seems a very long way off indeed.
Mobile wallets might as well remain in the realms of science fiction, and whereas in the USA and the UK we may soon all be carrying less cash than ever before, in Argentina that does not look like changing for a long time to come.

A Cash Culture
Dealing with the daily need to carry large wads of notes and handfuls of coins was one of the challenges that I found most frustrating when I first moved to Argentina a few years ago.Because in Argentina almost every transaction seems to be carried out in notes and coins rather than bank transfers and card payments.

There are a few reasons why this is the case, including:

Distrust of the Banks
The crisis in 2001/02 is still very fresh in the population’s mind. Many people felt robbed by the banks after their dollar savings were converted to pesos and plummeted in value, and Argentines always seem to be certain that they are on the verge of another catastrophe, so they take their chances with the thieves and stuff their money under their mattresses instead of letting it anyway near a bank.

Rocketing Inflation
Of course, now there is another reason not to save your pesos away in your bank account: Inflation. Argentina boasts one of the highest rates of inflation in the world, estimated to be about 25% by private economists and anyone apart from the government. As a result, saving money in pesos is simply not financially feasible as the value will get eroded within months.

The Problems of Living in a Cash Culture
Whatever the reasons for doing everything in cash in Argentina, there are a number of problems which this brings for anyone who is living here.

Paying the Rent
If you rent an apartment in Buenos Aires, there is a good chance that your landlord will expect your rent in cash. It’s not that bank transfers do not exist, because they do. It’s just that many landlords prefer it that way.

So rather than arranging a recurring payment from my bank account each month, I have to take out a few thousand pesos from the ATM, travel an hour into the city, hand over the money, and travel an hour back again.

That may not sound like too much hassle, but when you know that it is entirely possible to automate the whole process, and when a few hours out of the afternoon is actually very destructive for a self-employed freelancer, it starts to become very frustrating indeed.

Shopping
It’s fair to say that most places accept plastic these days, at least in Buenos Aires. And in some places, notably the large supermarkets, there are actually some good deals to be had when paying by card.
But a large number of smaller stores charge 10% to 15% extra on their items when paying by card, making it ridiculous to pay for any items with anything other than cash.

Lack of Change
Even though so many transactions are carried out in cash, one of the most frustrating things has been the sheer lack of change available.

When I first arrived in the city, catching a few buses in one day became a nightmare because of the need to use coins for each journey. There simply were not enough coins to go around, and they became so scarce that I would be forced to buy packets of sweets and bottles of drink just for the change, which even then was often hard to find.

Now thankfully we have an electronic payment system on the public transport which has eased that burden, but if you hand over $100 pesos in a shop to a cashier, the first thing they will often ask is if you have anything smaller, even though it’s only worth just over $20 USD.

La Inseguridad
‘La inseguridad’ is a big issue right now in Argentina. The population is becoming increasingly angry with the levels of crime almost everywhere, and although you wonder how much of this is hyped up by the media, it is always sensible to take precautions.

Despite the fear of crime, you’d still be very unlucky to be mugged. But I know for sure that I would rather not have my entire month’s rent on me if it does happen.

There have been some terrible stories in the press over recent years which have highlighted the problem. In 2010, Carolina Piparo was eight months pregnant when she was shot in the middle of the after leaving a bank having withdrawn about 35,000 pesos (just over $8,000 USD at the time) in cash, and lost her baby as a result.
There is a story in the news on a weekly basis about someone having their apartment broken into and having their life savings stolen, so keeping your money in cash can turn out to be very costly indeed.

A Cashless Future?
The cash culture is certainly something that you will want to be aware of when you head to Argentina, so get prepared to constantly have a wallet stuffed with notes wherever you go. And as for mobile wallets, well that just does not seem like it is going to happen here anytime soon.

Connor Davies lives in South America where he enjoys a location-independent existence working as an English teacher and freelance writer amongst other things. To find out more about how you can make a living from anywhere in the world, you’ll find all you need to know—and a free ebook to get you started—at Aspirations Abroad.