Home » Australia » Financial » The Australian £250k Lifetime Allowance: How Will It Affect Expats? 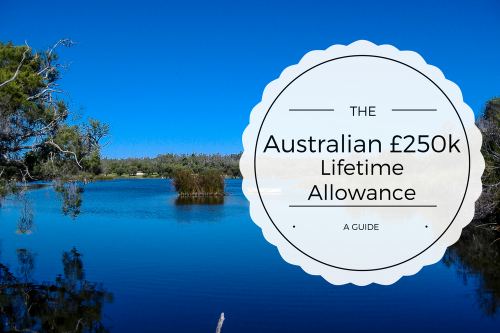 The idea is aimed at catching Australians who were boosting their pension funds with large contributions, particularly with the proceeds of a house sale, which they could then draw down as a tax free sum.The move will catch Brits who have been planning to transfer their pension Down Under and it will also affect Australian-born expats who are high earners in the UK and elsewhere and who are planning to move their retirement savings back home.

For British pension savers the Australian pension savings cap is a quarter of the £1million they are allowed currently to save while in the UK. The Australian government imposed limit amounts of £250,000 over a lifetime and this will be retrospectively calculated for all pension funds dating back to 1 July 2007.

The managing director of pensions advisory firm Monfort International, Geraint Davies, said: “Because their UK pension may breach the new Australian $500,000 limit, many people will find they are in a difficult situation.

“The cap will hit everyone planning to move or return Down Under and came into force immediately; there has been no time to plan.”

Until the new cap was introduced, British expats only had to comply with the country’s annual limit of $180,000 or £90,500. They also had the opportunity of making a $540,000 contribution if they were bringing forward three years’ worth of contributions and were under the age of 65.

The big appeal to British expats retiring to Australia was that they could easily move $720,000 into an Australian pension fund and add another $540,000 three years afterwards; the $500,000 cap means this is no longer possible.

Pension experts say that anyone trying to circumvent the rules or trying to place more than $500,000 in a single transfer into a pension fund will see the money being returned back to the UK under pension rules that prevent lump sums being made that are over the legal limit.

In addition, those trying to breach the pension cap could face a penalty tax on the excess amount of up to 45% or being told to remove their excess contribution.

However, the new cap came into effect from May 2016 after its announcement in the Australian budget and means British expats will now have to leave money in their UK pension as well as in bank accounts.

That’s not all; financial advisers say the Australian pension allowance can also make their job more difficult when it comes to an advising people in the UK on how they can migrate their pension fund to Australia when they retire.

As with all financial advice, expats should seek an experienced financial adviser and while many firms in the UK are not equipped to give advice on Australian pensions, there are specialists available who can do so.

The move by the Australian government to reduce the pension allowance to £250,000 is difficult for British expats as Australia is a popular destination for retirees, with experts saying that thousands of ‘Poms’ emigrate there every year.

Essentially, any UK expat who is living in Australia and paying tax on their UK savings may now need to consider using other vehicles for their money to avoid breaching the Australian pension cap.

Experts are also puzzled by the move by Australia to change its lifetime pension allowance, since it is moving in the opposite direction to the pension model in the UK which is aimed at building up retirement savings and income for future generations.

The UK is facing a dwindling rate of savings and an ageing population. The rules on accessing retirement pots were changed in April 2015 to give savers unrestricted access so they can put their money to better effect or even spend it on whatever they fancy.

The big difference with the Australian move is that their superannuation scheme is geared towards providing an income during a saver’s retirement. A government minister has already indicated that pension freedoms that have been seen in the UK will not be adopted in Australia.

However, there are other reforms being proposed for the Australian pension market. One that comes in from July 2017 will see a saver’s concession contribution being reduced to $25,000 a year. The work test for people who are aged between 65 and 75 and wanting to contribute to a super pension scheme is being removed altogether.

Australia is also changing its superannuation withdrawal phase with a total amount capped at $1.6 million being introduced for all residents on how much they can transfer into their tax-free retirement phase from July next year. Any money added over this amount will be taxed.

For expats looking to retire to Australia there’s no doubt that the changes have had a dramatic effect on their retirement dreams. They will need rethink their plans and what they will do with their excess savings – the situation has become unexpectedly complicated and also impacts on expats from around the world who have chosen to retire to Australia.

In addition, the cap also applies to superannuation contributions that have been made since 2007, so British expats who’ve moved their pensions to Australia since then will also be affected.

For those expats who are already living in Australia, there are three options they could possibly follow. These are:

A British expat could leave their pension in the UK to enjoy the country’s higher lifetime allowance of £1 million, which has been reduced from the previous limit of £1.25 million. The drawback to this plan is that they may be liable for paying a higher rate of tax while they enjoy retirement in Australia.

There’s also the possibility of doing nothing so when the changes come into effect they will pay a large slice of their pension in tax charges. After working and saving hard for many years, this could be a substantial amount to lose by not planning and preparing.

Another option is for a British expat to transfer their pension pot into a Qualifying Recognised Overseas Pension Scheme (QROPS). However, the selected QROPS will need to be located in a completely separate jurisdiction and one that has no lifetime allowance cap.

All UK expats currently living in Australia need to act promptly to avoid being caught out and making what could be an expensive mistake.

Financial advisers in Australia looking to help British expats and how they can overcome the lifetime allowance changes say they have been left in ‘limbo’.
Montfort’s Geraint Davies has criticised the timing of the government’s announcement to bring in the cap on non-concessional contributions.

He explained: “When a country changes its rules as drastically as Australia has done it then leaves legislation in limbo because of a general election which makes life difficult for financial advisers in the country.

“However, when trying to dovetail one country’s retirement planning regime with another that has undergone serious change, for instance with the UK and Australia, then advisers are going to stop and think.”

He warned that Australian expats living in the UK who are receiving financial advice from an adviser need to be aware that they may not be in a good position to give advice at all. He also expressed concern for those people who have dual Australian and UK nationality, as well as expats looking to emigrate, to be cautious.

Mr Davies says that by accepting financial advice that may not be accurate, the recipient may cause untold damage to their pension pot.

Mr Davies explained: “This is a complex situation and if the adviser does not know what’s going on, how can they treat their customers fairly?”

Pension experts also praise the Australian system as being much more advanced than the UK’s pension schemes, for instance Australia is better prepared for pension auto-enrolment so Australians tend to save more over the course of their career for a larger pension pot. The government has made clear that it wants more Australians to save so they do not run out of money during their retirement and become vulnerable.

The move to introduce a cap comes at a time when the Australian superannuation system, known as the super, comes under closer scrutiny. The average balance for a super on retirement is $280,000, which would pay a lifetime annuity of around $15,000 per year or $577 every two weeks and many are questioning why the cap has been introduced at all.

Many critics of the system say that Australia’s high earners are the ones who benefit most from the superannuation system and they also enjoy various tax perks, though with the retrospective element of how the super is going to be changed, the country’s richest taxpayers will be pay tax on the money they’ve saved since 2007.

Also, this has not been a popular move and expats who have moved to Australia since that date and saved into their super will also be facing a possible tax bill.

In addition, there are regular reports that many of Australia’s 5.5 million baby boomers, those born between 1946 and 1965, are simply underprepared for their retirement. As these people near retirement age, the government in Australia is striving to ensure they save enough to enjoy their non-working years.

This is despite many of them being in debt or helping to fund their offspring or elderly parents. One research paper revealed that just 14% of this age group said they were prepared financially for their retirement with 51% saying they were ‘somewhat’ prepared and another 35% saying they were unprepared.

With the baby boomer generation accounting for one in four of Australia’s population, the country is gearing up for the impact of their retirement on the economy and assets including housing, over the next few decades. It’s believed that many retirees will sell their homes to fund their retirement and this will have an impact on the country’s housing sector.

Indeed, when Treasurer Scott Morrison told the Australian Parliament of his planned radical shake-up of the country’s superannuation system he pointed out that high-income earners were being targeted while the lowest paid would enjoy concessions.

Despite the changes, Australia will undoubtedly remain a top destination for British expats to retire to and this has been underlined with a survey that places Australia as the sixth best retirement destination.

The findings from Natixis in its 2016 global retirement index places Norway in first position with 86% for its quality of life and finance rating.

It is followed by the likes of Switzerland, Iceland, New Zealand and then Sweden before Australia which scored 78%. That compares with the 17th placing of the United Kingdom on 71%.

However, when finances in retirement are analysed, Australia is one of the best rated countries, along with Switzerland on 77%. Only Singapore ranked higher.

Pension experts in Australia also point to the country’s cost of living to indicate how much someone needs to live on when they retire there. The figures from the country’s financial authority revealed that a couple looking for a modest level of retirement living will need a weekly income of around $653.

For couples looking for a comfortable retirement, their weekly income should be around $1,130, or nearly $59,000 a year.

Essentially, the limit on what expats planning to retire to Australia can bring with them will be a setback and open them up to a potential tax bill, but with planning and preparation there’s no reason why expats cannot enjoy their Aussie retirement in financial comfort.