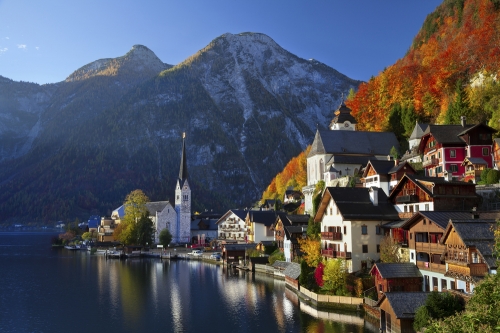 The origin of modern day Austria, which has a population of 8.7 million people, can be traced back to the times of the Holy Roman Empire. It shares boundaries with Germany and Czech Republic on the northern side while to the south, we have Slovenia and Italy. Austria is flanked by Hungary and Slovakia to the east, Liechtenstein and Switzerland to the west. This Central European country is divided into nine states (known as Bundesländer in German). Austria is more than 83870 square kilometers, about 68 percent of which is situated 500 meters above sea level. Most of the country has a mountainous terrain, with the Alps taking up almost two thirds of the country’s territory. Austria stands 12th in the world in terms of Gross Domestic Product.Vienna, the country’s capital, is a bustling major global city with more than 1.8 million inhabitants. The official language of the country is German. Bavarian dialects of this language are most commonly spoken among native Austrians. As well as German, languages used in local government offices are Croatian, Hungarian, Slovene and Burgenland.

Since the Austrian State Treaty after World War II, Austria remains politically neutral. The treaty grants that Austria shall not form military alliances with other countries. This neutrality is at the core of the country’s foreign policy. Austria plays an active role in a number of economic alliances such as the Organization for Economic Co-operation and Development among others. The head office of the Organization for Security and Co-operation in Europe (OSCE) is also located in Vienna, making it very important from an economic standpoint.

Since Austria is part of the European Union, the promotion of trade and commerce has led to a lot of expats settling there. Since the days of the Habsburg Empire, Vienna has been a hub for migrants flocking to the city for better opportunities. The multicultural vibes of Vienna and other smaller cities in Austria make many an expat feel welcome on arrival. Employment rates have increased significantly over the years, even during times of weak economic activity. Many international organizations such as the OPEC, UN and IAEA have their headquarters in Vienna, making it ideal for expats.

Vienna has also been voted in the top five places in the world for international conventions. The amazing cultural experience, the beautiful sights on the Danube and the country’s rich heritage mean that the capital is a great place to visit for any expat in Austria. Add to this the job security, high standards and relatively moderate cost of living plus the backing of a strong economy, and you can see why Austria is a haven for expats looking to establish a new career.

As a member of the EU, Austria recognizes the Euro as its official currency. The banking system in the country is efficient and meets global standards. It has a vast global network, associating with banks in the United States and other European finance hubs, while setting up corporate offices and branches across all major continents. Österreichische Nationalbank is the central banking body in Austria. A semi-government body, half of the shares of the bank are held by the government of Austria. The central bank is charged with the task of preserving the purchasing power of the national currency that translates to its exchange rate against stable currencies of different nations. The Österreichische Nationalbank defines the rules pertaining to the reserves deposited by credit institutions and other banking facilities.

There are over 700 banks that constitute the Austrian Banking System. Joint-stock banks, private banks, postal savings banks, cooperative credit firms, private savings banks and so on are all a part of the Austrian Banking system. Banks in Austria are broadly classified into three major categories. The single tier institutions consist of joint-stock banks, specialized credit institutions, housing construction banks and mortgage banks. Savings and cooperative banks are a part of the two-tier structure. The Raiffeisen banks are included in the three-tier banking category.

The most prominent banks in Austria are Bank Austria, Raiffeisen Zentralbank and the Erste Group Bank. The Österreichische Länderbank and the Creditanstalt-Bankverein are the largest joint-stock banks in Austria. After the merger of Österreichische Länderbank with Bank Austria, about 25 percent of the total assets of all financial institutions in Austria are under one giant financial corporation.

Austrian banks offer all kinds of credit and financial services to expats and nationals alike. A plethora of financial instruments are available for managing your money. Austria encourages free trade and hence there is no upper limit on credit and capital markets, even for foreign institutions.

It can be challenging for expats in Austria to find the right bank. Let’s take a look at some of the unique features that Austria’s finest banks have to offer.

With 300+ locations and a horde of partner branches in 19 different nations, Bank Austria is the most accessible bank in the country as well as being the largest. Bank Austria has three types of accounts that expats can benefit from:

1) As the name suggests, the Relax account is a great one for those who want banking worries off their mind completely. Standing order payments and round-the-clock customer care are some of the pros of this fixed price account.
2) If you’re not a fan of visiting the bank, Bank Austria has got you covered with their Online-Only account. With everything done from a mobile device or computer, this account can add a great deal of convenience to your finances.
3) If nothing else fits, Bank Austria has you covered. The Perfect Fit account is for expats with low bank usage. The maintenance fees for this account are generally low and its plans are tailored to meet customer needs.

Boasting 2,700 branches in seven nations across Eastern and Central Eastern Europe, the Erste Bank is a name you’ll hear often when talking finance. With over one million global clients, it is definitely expanding its reach in Austria, and now offers enhanced services. The Erste Bank has a facility that lets you open your bank account online. They also feature a contactless payment option with their classic bank card. For student expats, Erste Bank provides the option of a student account that is free until the user turns 27. The S Comfort account, generally used for wages or pensions, is free for a year.

If you’re an expat looking for a bank you know and trust, there are a lot of international banks that you may be interested in. These include Deutsche Bank, BNP Paribas and Western Union. American Express also offers credit card facilities in Austria.

The first step to getting your finances in place is opening a bank account. Opening an account in Austria is fairly easy. Expats can select a bank of their choice and start an account by submitting these documents.

• Proof of residence: This includes a document such as a rent agreement or electricity bill stating the address of your residence in Austria.
• Passport: A duly attested passport from your country of origin.
Employment details
• The residence registration form (optional) – The meldezettel, also known as the residence registration form, is required to be filled by expats at a local district authority on arrival in Austria. It is imperative to register yourself to prove that you are financially independent and would not need government support. The process to apply is pretty straightforward.

Once you have submitted the mentioned documents, you will be required to fill in some forms, details of which will be entered into the banking database. Expats usually receive dockets bringing them up to speed on the various personal banking services available. Most banks also appoint personal bankers for expats, making it easier to manage their transactions. Once the account gets activated, users receive the new account details along with the bank code. The user can use these two codes to transfer funds and manage their account.

Most Austrian banks are open on weekdays between 8am and 3pm. On Thursdays, banks stay open till 5.30 in the evening. In rural areas, banks may close by as early as 1pm. Bank branches are equipped with 24 hour ATMs which can be used to withdraw money, get detailed account statements and transfer funds to other accounts. Since the dawn of the digital age, internet banking has become more and more popular. Most Austrian banks have integrated internet banking portals that help users manage their money online. Usually online banking services, along with telephone and mobile services, are offered to the customers for free. Some banks also charge a nominal one-time fee for the maintenance of these services.

The current account is the most common kind in Austria, known as the girokonto. Expats will be offered debit cards that they can use to withdraw money from ATMs and shop online or at large retail stores. Expats aren’t issued credit cards by most Austrian Banks until three months after their arrival in the country. Austrian banks make life easier by allowing you to set up fixed monthly deductions for expenses such as rent. A direct auto-debit authorization is another ideal tool for variable expenses like paying monthly bills.

Trading And Equity In Austria

Expats looking to trade in equity during their stay in Austria need look no further than the Vienna Stock Exchange. In 1771, Empress Maria Theresa decreed a provision to establish a stock exchange in the country’s capital. In the years preceding the first World War, this was the hub of finance in Eastern and Middle Europe. Even after the war, Vienna continued to be the primary equity market for slowly rising neighboring economies. Today, the Vienna stock exchange deals in 12 kinds of investment certificates, five of which are Austrian and seven are international. The Austrian market has favored investors, with an 8.71 percent growth in the year 2002, which continues to grow at an average per annum rate of 10.15 percent.

Six months after moving to Austria, all expats earn a ‘resident’ status from the taxation department. This makes expats liable to pay taxes on all revenue earned from Austrian sources as well as on revenue from their home country. The taxation system in Austria is consistent with the rest of the world, in the sense that it gets deducted based on your salary, on a progressive scale. The two major tax deductions are personal income tax and social security contributions. More than 40 countries have agreements with Austria to avoid dual taxation. This gives expats an exemption from having to pay taxes in Austria for any revenue generated either in their home country or Austria.

Austria boasts of all the modern-day banking facilities that expats are used to. The ease of access and the new-age infrastructure make banking in Austria a hassle-free experience. The benefit of wealth managers to help sort your finances only adds a cherry on top. So enjoy your stay; you can bank on the Austrian financial services to do their part!

Have you lived in Austria? Share your experiences in the comments below, or answer the questions here to be featured in an interview!