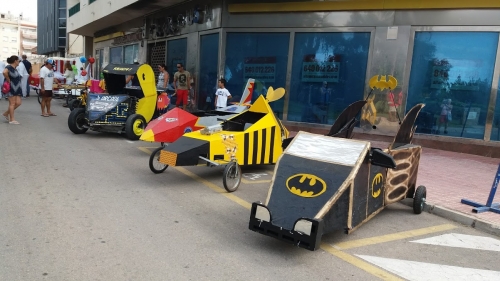 There is even a hilarious Spanish sketch on social media in which a woman goes into an office armed with a suitcase full of documents, which she triumphantly produces one by one. Each time she is refused service on the grounds that another one of these ‘essential’ pieces of paper is needed, she whips out the required document with glee. This is much to the annoyance of the clerk on duty behind the ‘help’ desk, who gets angrier and angrier as the necessity of actually doing his job becomes more imminent. It’s very funny, and comforting to know that the Spanish themselves find their bureaucracy irritating.My first big surprise here in my village was the sight of ladies walking out in the street in their nightie and slippers to shop for bread; next came the row of dining chairs lifted out onto the pavement as neighbours gather to chat and watch the world go by. When temperatures reach the high thirties I can fully understand why that beats suffocating indoors.

I wasn’t expecting the queues. It sometimes feels like going back in time 30 years. You can never ‘pop in’ to the bank or post office, and if you get one job done in a day you consider yourself extremely successful. Environmental awareness and customer service appear not to be familiar concepts here: ignoring customers while chatting on phone, greeting you with a simple ‘no!’ and a dismissive wave is common, as is paper wastage (insisting that you come back with excessive printed copies, and issuing tickets for the ubiquitous queuing), and insisting that you use plastic bags for fruits and veg weighing.

Where I came from, you could go into a shop with your debit card and get ‘cash back’ with any purchase, no matter how inexpensive. Fifty pounds cash back with a fifty pence bar of chocolate was not uncommon. Here, they seem to have never heard of such a procedure. Indeed, in many shops and restaurants just paying by card is not an option. If it is, you may have to produce your passport as ID. Being a fairly impatient soul, I found this infuriating at first, especially when reminded – frequently – that it was for my own benefit. I never did understand how.

My terrace is huge, and has beautiful views. It doesn’t rain here very often, but I do need to water my plants regularly. So far, so good: no problem. Except that after rain, or plant watering, a pool of water accumulates in the middle of my terrace because the drain is not located at the lowest part. So, I have to sweep water upwards to get it into the drain. Why, I wonder, did the builders do that?

After all this exertion I might look out towards the local park, in the middle of which is a cemetery. Now, I have seen barbed wire on the outside top of walls to deter people from breaking in, but why, I wonder, does the local cemetery have barbed wire on the inside top? To stop the people in the cemetery from getting out?

Then there’s the pedestrian crossings positioned at the beginning of the exit roads of roundabouts. Just as you begin to accelerate away from the roundabout you have to slam on the brakes as a little grannie with a shopping trolley and her dog happily dawdle across the road, not two metres into the exit lane. Or better still, the way the green light comes on simultaneously for both the vehicular traffic and the pedestrians. That one is not only illogical but downright dangerous. (Notice how I’m beginning to get irritated now?)

Taking the lift inside a building can be a source of fun and games, too. The ground floor may not be called the ground floor, and your door number may not equate to the floor you live in. For example, my home is number 46, on the fifth floor, which regularly confuses my visitors.

Despite all this, settling into life in Spain was a positive experience for me. I was lucky enough to know a lot of the language before coming, and so able to get to know my neighbours quickly. I soon learned that Spanish people in my area don’t often visit each other’s homes. Rather, they meet in cafés, walk together or go to a concert or theatre and perhaps a tapa or two. In my pre-Spain home it was the norm to invite friends to coffee, tea or drinks at home, or for dinner. At first, I thought they were just wary of me – the foreigner – as they were certainly not unfriendly, quite the reverse. Maybe ‘private’ describes it better. Now I know that they are the same with their local friends, and I feel reassured by that.

On the plus side, it is impossible not to be aware of the importance of family here. Teens participate in fiestas and parades, dressed up like the adults in fancy costumes. Young children are used to accompanying their parents everywhere, so in many situations, like restaurants, staying up late, or dancing, they conduct themselves with animation and alegría, but rarely running wild with hysteria or screaming.

Whilst a cup of coffee can be taken in a bar offering an extensive range of alcoholic beverages, most restaurants have a children’s menu alongside the ‘menu del día’. Bar closing time is when the last person leaves, and the scheduled timetable for parades will state the start time, whilst the finish time is ‘when it finishes’.

Then there’s ‘red days’ when no one is supposed to work, but many shops are open, if for a limited time, plus several other unexpected days off for the special day of a saint (by the way you get two birthdays here: your birth date and your saint’s birthdate).

On the subject of saints, it is easy to get confused with the number of people sharing the same saint’s name. I know at least two couples consisting of José María and his wife María José. As well as being caught out by the unexpected holidays, you may find yourself driving a long way – even to another city – to engage in one of the aforementioned bureaucratic procedures, only to find a note saying ‘cerrado por descanso’ (closed for a rest) on the door.

In this vibrant country where music and art thrive, where citizens dance in the streets, where markets are packed with delicious fruits, vegetables and fish, I feel as if I belong to one big family. So far, for me, there is nowhere else where I have felt such a close bond to humanity as a whole, and I have travelled very widely over the last couple of decades.

The first time I came to Spain it was to improve my Spanish, as I had just been given a job as a Spanish teacher. I stayed with a friend, got acquainted with balcony barbecues and chatting late into the night. On the airport bus, heading back home, I looked around at the local faces and made a decision to return. Twenty years later, I moved here and found my perfect home. On that bus I saw people with a soul; they were somehow in tune with one another in a way I hadn’t seen before. One thing for sure is that the people here are affectionate, warm and caring, and very appreciative of life and of one another. On the television news they refer to ‘nuestro país’ – our country – and there is a collective togetherness, perhaps engendered by the sufferings of the civil war and its ensuing deprivations. I have even come to love (well, at least smile at) its various idiosyncracies and resulting frustrations, that are part of the enriching experience of living here.