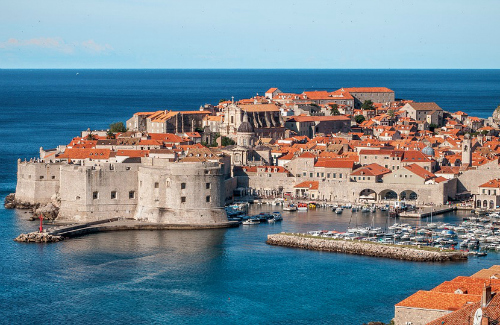 Croatia, often referred to as Eastern Europe’s youngest nation, gained its independence from Yugoslavia in the year 1991. Since then, expats from all over the world have been attracted to this geographically diverse country, primarily because of its Mediterranean climate, densely-forested mountains, rolling hills, and Adriatic coastline. Surrounded by Hungary, Slovenia, Bosnia & Herzegovina, Serbia, and Montenegro, its proximity to places like Paris, London, Berlin, and Venice are an added bonus.The 1100 islands and reefs scattered across the length of the Dalmatian Coast are also gaining popularity as retirement destinations for other Europeans. For a while now, news reports have been referring to Croatia as the “New Tuscany”, at least in part because a number of well-known celebrities have bought private islands and villas just off its coast. Zagreb, the country’s capital, is also home to a fairly sizeable expat population.

Because of the increase in the number of tourists and expats, the cost of living in Croatia has been on the rise for a while now. Everyday expenses in this country tend to be higher in comparison with other Eastern European nations. However, living costs in Croatia are still lower than Western Europe and the US.

Read on to know more about the average monthly expenditure for the various items that are likely to contribute towards your cost of living in Croatia.

Accommodation and utilities are usually the biggest personal expenses for expats across the globe. Unfortunately, rental options in Croatia are limited. Most foreigners have no choice but to lease a room or an apartment in the major cities such as Zagreb, Dubrovnik, and Split.

As in most other countries, rents in the heart of the city are higher than the other areas. For example, the rent for a three-bedroom apartment in the city center is around 3,575 Kuna, but the same size of house in an inexpensive locality can be leased for 2,650 Kuna. The rent for a one-bedroom house is around 2,115 Kuna in the city and around 1,600 Kuna outside the city. These prices are of course likely to vary to some extent, depending on whether or not the house is furnished.

Alternatively, you could find a dormitory or a sharing room for rent from 475-675 Kuna per month. This amount may or may not include some furniture and utility expenses.

A fully furnished apartment that comes with all household appliances (including electronics) may be a good idea for some expats, especially if the employer is willing to pay the monthly rent. However, many long-term expats lease semi-furnished houses and purchase electronics separately as they are quite economically priced. You can buy a branded 800/900-watt microwave for 628 Kuna and a 40” flat-screen TV for 2,750 Kuna.

Real estate prices are on the steeper side, however. The average price per square meter is 14,000 Kuna in the city center and around 9,350 Kuna outside the main city area. Before deciding to buy, bear in mind that foreigners require permission from the Ministry of Foreign Affairs to purchase property in Croatia.

The cost of household utilities in Croatia has almost doubled in the past decade. A couple is likely to spend around 1,250 Kuna per month on electricity, heating, garbage disposal, and water.

The cost of eating out in Croatia usually tends to be quite reasonable. This is at least partly because of the fact that most bars and cafes don’t add a service charge to the bill.

A three-course meal for two at a mid-range restaurant is likely to cost 200 Kuna (US$ 30, £ 21, € 27) or so. You’ll need to pay around 45 Kuna for a single-course meal for one at an inexpensive establishment and about 35 Kuna for a combination meal at a fast food joint.

The amount of money you spend traveling to work and other places will definitely have at least some impact on your monthly expenses.

Public transport in Croatia is fairly well developed, and even though most people have their own cars, the local people often use buses. A one-way bus ticket costs between 10 and 15 Kuna. Regular commuters opt for a monthly pass for around 360 Kuna.

Taxis are also easily available throughout the major cities. The standard meter rate at the start is 25 Kuna, and passengers pay an additional 10 Kuna for every additional kilometer. The tariff is higher if you are traveling on a Sunday, a public holiday, or after 10:00 PM. The rate for waiting is around 40 Kuna per hour.

Many expats settled in Croatia prefer to drive. The approximate cost for a new, basic, small car varies between 140,000 Kuna and 190,000 Kuna, depending upon the brand and model. Petrol is priced at 9.5 Kuna or so per liter (1/4 gallon).

The prepaid mobile tariff for local calls, without any plans or discounts, is approximately 0.85 Kuna per minute. On average, a monthly mobile bill comes to around 125 Kuna.

People living in Croatia spend an average of 600 Kuna per month on apparel, accessories, and footwear. You can pick up a pair of branded jeans for around 500 Kuna. Other types of casual clothing are cheaper.

Formal clothes in Croatia are quite expensive for both men and women. The average price for a man’s suit is 1,500 Kuna and a woman’s suit is 1300 Kuna.

Both men and women spend anywhere between 500 Kuna and 700 Kuna for a pair of shoes. Like in most other places, formal footwear is considerably more expensive (at least 100 Kuna or so) than sports shoes.

In addition to food items, your supermarket bills are likely to include toiletries, such as:

Visits to the salon for a haircut can cost men anywhere between 30 Kuna and 75 Kuna.

Most popular over-the-counter medicines for minor health problems can be purchased for approximately 55 Kuna per strip or bottle. A box of antibiotics (12 doses) costs 60 Kuna or so. If you need to see a general practitioner, be prepared to pay about 250 Kuna for a short visit (15 minutes).

Recreation is an important part of expat life. Croatia has a host of leisure activities for people of all ages and preferences. Entertainment during summer festivals is generally free. Prices of excursions, boat rides, and sightseeing trips may vary, depending upon your negotiation skills.

Eating out is considered reasonable, as people pay around 100 Kuna to 150 Kuna per head for a meal at a mid-priced restaurant (with alcohol). The approximate prices for beverages at restaurants include:

Drinking wine at a bar may cost you anywhere from 60 Kuna per glass to 1,000 Kuna for a bottle, depending on what you order.

Going to the movies for an international release costs around 35 Kuna per head. Theater and concert tickets cost more than double that, at around 80 Kuna per head.

In case you are into fitness, you could join a gym for around 250 Kuna per month (yearly memberships are cheaper). Alternately, you’ll pay about 60 Kuna for renting a tennis court for an hour at the weekend.

Tipping is accepted as a way of expressing satisfaction with service. However, unlike in some other countries, most Croatians in the service industry don’t depend on tips to supplement their incomes.

You can tip as much as you like, keeping in mind the service you received and your bill amount. While foreigners, especially North Americans, tend to give 10%, the locals usually just leave their loose change behind at bars and cafes. Croatians will generally go through their bill before paying it. They avoid tipping if the establishment has charged them for bread.

While it isn’t uncommon for people to leave an additional amount at bars, restaurants, and cafes, tipping is not required for taxis and other services.

Primary and secondary education across the country is free, as it is sponsored by the government’s Ministry of Education. Beyond this, the tuition fees for various programs are determined by the particular institution, and the level of fees depends upon the type of study and its duration. The range for international undergraduate students ranges from:

A detailed comparison will show that the cost of living in Croatia is considerably lower than the US and the UK in terms of consumer prices, rents, entertainment, groceries, and education. In spite of this however, locals sometimes struggle to make ends meet, as local purchasing power is also much lower than it is in the US and the UK.

Many expats who have been living in Croatia for a while now believe that the main problem isn’t the cost of living but the fact that the country is experiencing economic crises. Foreigners from the US and the UK don’t really find things more expensive, but those who earn a local salary often complain about high living costs.

In Croatia, the average monthly disposable salary after taxes is 5,050 Kuna (US$ 750, £ 530.16, € 671). However, expats tend to earn a much higher salary. It is therefore essential that you consider your income and monthly expenditure carefully before deciding to move to Croatia.

Do you have any tips for people who are moving to Croatia? Let us know in the comments!