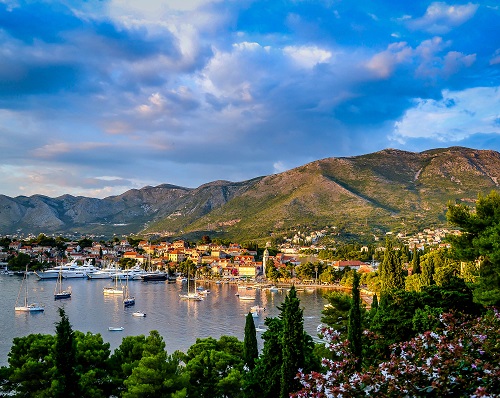 Croatia is a young country, having gained independence from the former Yugoslavia in 1991. It is a country of great diversity with its stunning Adriatic coastline, rich mountain forests and Mediterranean weather. Croatia is becoming an increasingly popular destination for expats, most of whom settle down in Zagreb, the capital city. Dubrovnik too is a popular city for expats.As Croatia’s tourism industry grows, a number of expats are moving to Croatia to start their own businesses. While living in Croatia, expats will be treated to a variety of leisure activities, ranging from mountain biking to diving. Croatia also has many World Heritage Sites and expats will find a number of museums and art galleries to visit.

Croatia’s economic growth has been slow and the country’s infrastructure is not up to scratch yet. But the government is favorable towards business and has thus been able to attract foreign investments. Property prices in Croatia are affordable and there is a choice of many tranquil locations and uninhabited islands, making it an ideal retirement destination. Many high-profile celebrities have purchased private islands in Croatia, thus earning the country the title of ‘New Tuscany’.

Croatia’s healthcare system adheres to European standards, but the government-run medical facilities may not be of such a high standard. This is why many expats prefer to visit private hospitals, even though they cost more. Croatia’s schooling system is good, but there are only a few international schools and most of them are in Zagreb. Living in Croatia has its pros and cons, but many expats are choosing this low cost lifestyle in spite of the challenges the country faces.

Here are ten reasons why you should move to Croatia.

Now, this one works both ways: for those who love abundant sunshine, Croatia is a treat because it is one of the sunniest places on the earth. But if you don’t like a sunny climate where for much of the year, the sun stays up till well after 9pm, Croatia may not seem like such a paradise. Nonetheless, you have to admit that sunny days allow you to enjoy a lot of the other things that Croatia has to offer, from the beautiful countryside to the many music festivals.

Those who love the outdoors will take delight in Croatia’s countryside. Kayaking and white water rafting on rivers like Kupa or Mreznica are just a couple of the outdoor activities available in Croatia. Those who love exploring can take a trip to the Velebit caves, which are some of the deepest caves in southeastern Europe. There’s also the Veternica cave less than 9km from the center of Zagreb. There are guided tours available for this cave.

There’s more to discover in Croatia such as the eight national parks and eleven nature parks, which are a treat for those who enjoy hiking, climbing, mountaineering and bird watching. Croatia is also home to the Plitvice Lakes National Park, one of the oldest parks in Southeast Europe and the largest national park in Croatia. It is also among the first natural sites in the globe to qualify as a UNESCO World Heritage Site.

Croatia’s lakes are another major attraction. They are popular for their distinct jewel colors, which range from aquamarine and blue topaz to emerald and sapphire. The rich forests are home to many species which can sometimes be spotted, such as eagles, brown bears and lynx. Croatia’s many mountain ranges are ideal for activities such as skiing and other winter sports. 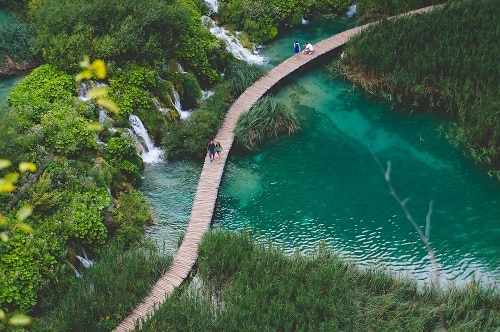 Summer time is when Croatia opens up another of its attractions, the Mediterranean coast, which is ideal for diving and sailing. Expats living in the northeastern region of Croatia, near the border with Slovenia, will have an opportunity to take riding lessons at the original stud farm where the world-renowned Lipizzaner horses are bred.

For those who love city life, Croatia has some treats in store for you too. The country has had a long history, which is apparent in its heritage. Croatia’s culture is deep rooted in its history. Even though the Croatian people have been living in the region for 14 centuries, the country has gone through earlier periods, of which the remnants still remain. Greeks, Romans and Byzantines influenced the region in antiquity, while the Golden Age of free Dalmatian cities did so in the medieval era. The later years bore influences of the Venetian Republic, Ottoman Empire and Habsburg rule.

Expats should not miss out on Croatia’s historical highlights. In Split, the second largest city of Croatia, a must-visit site is the Diocletian’s Palace, an ancient palace built at the turn of the fourth century AD. The UNESCO World Heritage Site today is a complex that includes the historical center of the town with its Romanesque churches, Gothic buildings and Renaissance and Baroque palaces.

A short distance from Split in southern Dalmatia are the cities of Trogir and Dubrovnik, both UNESCO World Heritage Sites. Trogir was deemed a special site due to its impressive urban continuity. It is a medieval town built atop the layout of a Hellenistic and Roman city. It also has some beautiful Romanesque churches and buildings from the Venetian era. These historical town centers are located against a Mediterranean back drop, making them truly unique. Dubrovnik may be familiar to many Game of Thrones fans, as it was the location of the fictional metropolis of King’s Landing.

With a spectacular coastline and pristine waters, it’s no wonder that Croatia has its own yacht week, an organized event that is exactly what it sounds like. Simply take a group of your friends, choose a yacht and go. The rest is organized for you. 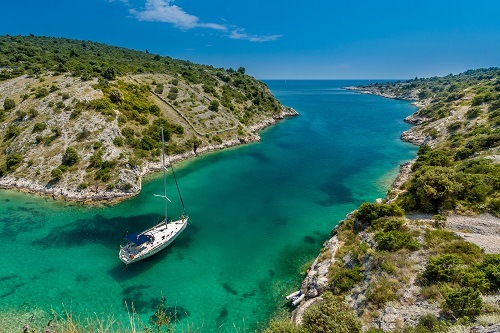 Visitors can voyage to the many ‘hidden’ beaches, the party beaches, and the island of Hvar. It also allows access to some of the parties and events taking place on the islands.

Croatia is a great place for music lovers and attracts many popular artists and DJs. The country’s music festival scene has become even more vibrant in the last few years. These festivals attract visitors from across the globe who come not just for the music, but also for the incredible locations, boat parties, lively crowds and bright sunny days.

Music festivals are hosted at Croatia’s world-class venues. Some of the popular festivals include Hideout, Fresh Island and Ultra Europe, which are held on the scenic island of Pag at the Zrce beach. The Dubrovnik Summer Festival held in August takes it a step further and offers everything from ballet to classical music concerts.

Croatia is a food lover’s paradise. Since it is centrally located in Europe, its cuisine bears influences of many different regions. The food is mainly Mediterranean with some Italian influences along the stunning Dalmatian coast. Inland, where the region is referred to as continental Croatia, the food is prepared in a distinct Austro-Hungarian style. Although they may be different influences, in both regions there is great emphasis on families coming together for the purpose of sharing a meal.

Traditional Croatian fare usually makes use of grilled seafood or meat. Cevapčićiis the Croatian version of meatballs, which are served with rice and a type of relish, called ajvar, made with garlic and red peppers. Dishes are made with an abundance of fresh produce and the different types of regional delicacies are a blend of Mediterranean and Central European recipes. In summer especially, families come together to cook in a bell shaped oven called peka, which cooks the food in its natural juices, making it flavorsome and tender.

Seafood is highly popular in Croatia and the dishes range from simple grilled fish to a seafood stew known as brodet, served atop soft polenta. Another favorite dish is black risotto made with squid ink. Spring is the time for spit roasts where lamb or pork are cooked. Herbs like rosemary are added to the charcoal to add flavor. Meals often begin with cured meat slices such as prsut, which is similar to prosciutto, a spicy salami called kulen, csabai sausage and speck. Paprika is used widely to enhance flavor.

Sweets in Croatia often feature seasonal fruits such as apples, plums and apricots. A special dish is palacinke, a thin type of pancake that is served along with fruit dumplings, tortes and biscuits.

Expats with children will be happy to know that the public education system in Croatia is free of charge. Children of foreign residents are also eligible for extra language lessons in Croatian. There is no charge for public education from kindergarten till the end of secondary education, due to subsidies by Croatia’s Ministry of Education. There are nearly 450 kindergarten schools in Croatia, although not all are public. Many of the schools are also connected to primary schools. Kindergarten is not mandatory, but children as young as a year old can still enter.

Primary school education is compulsory and begins at the age of six. There are about a thousand public primary schools that are governed by the municipalities. Primary schooling is categorized into two levels: 1st through 4th grade and 5th grade onwards. 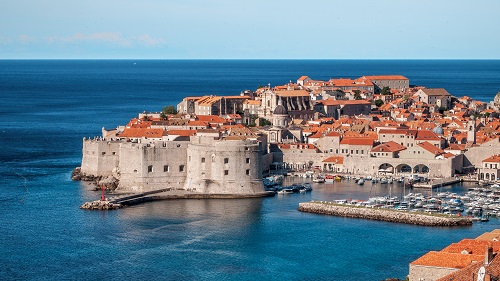 Secondary schooling is currently optional. The different types of secondary education include Gimnazija, vocational schools, and art schools. Expats with children who already speak another Eastern European language, those with fairly young children, or those who plan to live in Croatia in the long term, will benefit from sending their children to a public school. For expats who prefer international schools, Croatia has several of them, mainly in Zagreb.

Many expats consider Croatia to be an ideal destination because it is a developed country that offers affordable healthcare. Most of the funding for healthcare comes from public and government sources. Public health and environmental protection, and health education are all provided for by public healthcare. It also ensures adequate funding for antenatal and maternity care, and school health services. It even covers the military and war veterans, and provides for those living in remote areas of the country.

Croatia is one of the most sought-after destinations in the world due to its pleasant Mediterranean climate. The winters are mild and the summers are dry and hot, and last much longer than in surrounding countries. Central Croatia, which includes Zagreb and Slavonia, enjoys a continental climate where the winters are cold and wet and the summers are sizzling. Relaxed, safe and unspoiled, Croatia is among the best retirement destinations across the globe. It has pristine beaches, quaint fishing villages, Roman ruins, a beautiful lake district and great medieval walled cities. There are also a number of secret coves and harbors that offer beautiful views of the coastline.

The first person ever to retire to Croatia was the Roman Emperor Diocletian (AD 245-316), who chose to spend his retirement years along the Dalmatian Coast, in Split. He lived here until his death in 316, and the Diocletian Palace is now a UNESCO World Heritage Site.

Croatia has over a thousand beautiful islands on the Adriatic Sea. The sunniest and most glamorous of all islands is Hvar. Vis, on the other hand, is known for its unspoiled beauty and winemaking tradition. It is also the place to be for food lovers and those who like to engage in outdoor pursuits. The island of Brac is home to the famous Zlatni Rat beach and is a hotspot for watersports. Some of the other popular destinations include Mljet Island, half of which is a national park, Korčula, popular as being the birthplace of Marco Polo, and Rab, which is ideal for those who like a mild climate and sandy beaches.

Have you lived in Croatia? Fill in the questions here to be featured in an interview and share your experiences with other readers!