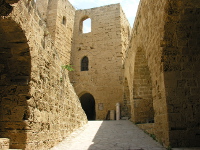 The island of Cyprus has long been a scenic haven for expatriates and visitors from the U.K. and elsewhere in northern Europe. As recently as 2011, its tourism industry attested to this by being ranked 24th in the world in “overall competitiveness” by the World Economic Forum, with its popular beaches alone being a significant selling point for travelers and foreign real estate investors. Around 60,000 British expatriates have made their home on the island.

However, Cyprus has come to international attention recently for a more unfortunate reason: not long after the European Union was collectively awarded the 2012 Nobel Peace Prize for “over six decades [of having] contributed to the advancement of peace and reconciliation, democracy and human rights in Europe,” the 2013 Cyprus banking crisis has become emblematic of widening fissures within the EU. This nation of fewer than 1 million inhabitants has come to represent the social rift that exists among the various European nations, particularly the creditor nations of the north and the debtor nations of the Mediterranean region. This is perhaps even truer in the case of Cyprus than it is of Greece, given the fact that Greece represented some of the first cracks in the foundation of the EU as a unified economic community, while Cyprus' example now shows a kind of "domino effect" in action.Cyprus has come under particular fire by the “Eurosceptic” movement for the fact that the “no bailout clause” in EU treaties was ignored for that nation’s benefit, a fact that this movement’s spokespeople will point to as evidence that such treaties are only selectively enforced, and that the single continental currency is unfeasible. Needless to say, emotions around this issue are extremely high and likely to overwhelm reasoned examination of the situation to date. Even the Cypriot president, Nicos Anastasiades, has not been immune from the intense emotion surrounding this sequence of events: he recently threatened resignation during a formal dinner, after he intimated that Cyprus was “being treated more harshly than any of the euro zone’s other bailout victims.” [ii]

Seeds of the Crisis, and Attempted Resolutions

As The Economist reports, Cyprus is – like Ireland and Iceland – a small country that has become dependent upon an “outsize banking system,” with a status as an “offshore financial center” contributing to a situation in which the banks’ 2011 balance sheets accounted for 800% of Cyprus’ actual gross domestic product. [iii] Russia’s involvement in Cypriot banks is particularly notable in this regard – a single Russian oligarch, Dmitry Rybolovlev, owns a 10% share in the Bank of Cyprus – and now Russia is being called upon for an emergency loan in order to re-finance the nation’s debt.

A deal reached on March 25th of this year, which involved a €10 billion rescue package for the country (€7 billion short of what was actually requested), also involved the closure of the country’s second largest bank and the significant downsizing of its largest bank’s operations.

The Situation for Foreign Visitors and Expatriates

One of the most serious implications of the banking crisis in Cyprus may be the levy that is placed on those making bank deposits in the future: this could reach 9.9% for savings accounts that exceed €100,000, with a 6.75% levy applying to accounts with less money in them.

If you are planning on visiting Cyprus anytime soon, you may be in for a “journalistic experience.” The effect that the banking crisis has on social life in the country cannot be easily predicted, although one particular observation – i.e. that “protest parties [in Cyprus] are gaining popularity” [iv] – is as good an indicator of future trends as anything. As it is in Greece, social and cultural life in Cyprus is likely to be, until the resolution of the current crisis, a spontaneous or improvisational affair centering on low-budget activities and mass public gatherings that may double as protests and as entertainments. Meanwhile, it should not be considered too irresponsible or lazy to look to present-day Greece for a glimpse of Cyprus’ near future: the provisional “barter economy” has been restored in many shops and markets, while perpetual uneasiness over crime has provided an opening for ideologically extreme groups who provide protection for the public in hopes of winning political clout (and a significant say in the daily affairs of any post-crisis Greece.)

British expatriates in Cyprus are already reporting significant inconveniences regarding banking, such as having their ATM cards withheld by machines when attempting to make transactions, or having no access to online banking. The U.K.’s Chancellor of the Exchequer, George Osborne, cognizant of the several thousand British military personnel and civil service employees on the island, has claimed that the British government will do its best to compensate these individuals for any losses incurred in Cyprus, although this offer does not extend to the remainder of British citizens on the island.