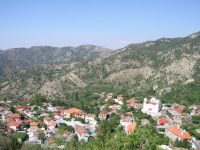 When we last checked in on the financial situation in Cyprus some weeks ago, the situation was one that could charitably be called “interesting” (and, to be sure, many would use harsher terms.) From the Cypriot-on-the-street to president Nicos Anastasiades, seemingly everyone in the country was operating at a high level of tension and indignation. Video of street demonstrations or of heavily guarded shipping convoys gave the impression of a nation teetering on the brink.

After being warned that a national default would result in Cyprus being removed from the Eurozone, Cyprus was eventually granted an emergency €10 billion loan to refinance its massive debt (an official Eurogroup statement slyly mentioned that it would “welcome” International Monetary Fund assistance in this matter.) One of the conditions of this was that Laiki Bank / Popular Bank of Cyprus would be closed.At the time, the issue of a bank levy being placed upon deposits – hovering around 7% but with reported percentages of anything from 10-20 for deposits of €100,000 or more – was one of the major issues of contention, for both locals as well as expatriates contributing to the local economy. Withdrawal limits akin to forced rationing, put in place on March 24, also made for serious challenges for locals and limited the mobility of expatriates.

Much changed upon the March 25 passage of the bailout package: the aforementioned levies were dropped, though there was no word as to when banks would reopen, and the misleadingly innocuous term “haircut” came into vogue to describe the process by which savings accounts not protected by a €100,000 investment guarantee would see up to 40% of their value being lost. As of April, central bank governor Panicos Demetriades claimed that the limitations on both bank deposits and withdrawals would be lifted as the bailout plan was set in motion.

After the bailout – what's next?

In the wake of all this, there is a mixture of good and bad news available for Cyprus, rather than exclusively the latter. As of now, the post-bailout outlook for Cyprus does not involve a grand national renaissance of any kind, yet there is much potential for its post-bailout economy to return to normalcy, thanks to both the local tourism industry and the promise held by the nearby Aphrodite gas field. Located within the country’s maritime ‘Exclusive Economic Zone,’ the latter is suspected to contain anywhere from 3-9 trillion cubic feet of natural gas reserves, a great boon to the nation’s economy if drilling operations in this area proceed smoothly. There was an initial dispute with Turkey over such an operation in this area, though Cyprus’ drilling forays began in 2011 and have since gone unimpeded by Turkish naval interruptions (more notably, these operations have received the blessing of the European Union, United States and Russia.)

As noted earlier, the Cypriot tourist industry was ranked as high as 24th in the world for its “overall competitiveness,” placing it within reach of countries like Norway and New Zealand in terms of their accolades received by the World Economic Forum. Naysayers could say that this industry is set for a sharp decline after the bailout crisis, yet the global tourism and travel industry is a surprisingly resilient and forgiving one – for this we only need to look at the continued profitability of, say, Carnival cruise ships after several highly publicized and embarrassing maritime mishaps involving their fleet. Vaguely defined instability seems to be less of a deterrent to visitors than more telegenic disasters, and there is also a growing segment of the tourist population that views themselves as philanthropists rather than mere ‘sightseers,’ eager to both set foot on foreign soil and to spend their disposable income in a place that can truly use help.

An opportunity for unification?

In the near future, political commentators are likely to continue painting Cyprus as a nation of amoral opportunists, as has already been done with the previously “bailed out” Greece. Somewhat lost in the recent war of wills over the bailout is another central aspect of the nation’s history, particularly the fact that the island remains divided between a northern Turkish-controlled zone and a southern Greek-controlled one: a state of affairs that can be traced back to the days of the Ottoman Empire, and which saw its most recent violent flare-up in the 1970s.

The ‘Annan Plan’ for reunification, which in the past has been supported by as many as 2/3rd of the island’s Turkish population (but not even a third of its Greek population), is again becoming a subject of discussion, with the resolution of the island’s north-south divide being seen as essential to the country lifting itself out of crisis. Anastasiades’ status as president could be quite helpful in this regard, since he was among the minority of Greek Cypriots in favor of this unification, and his Turkish counterpart Dervis Eroglu might see this resolution as an opportunity to help Turkey finally gain entrance into the European Union.

Lastly, as the Economist notes, the benefit for all Cypriot citizens would be a projected “GDP […] boosted by three percentage points a year for the five years after a settlement.” A collaborative foray into the Aphrodite oil field and a reconsideration of the Annan Plan may not be as much of a ‘hard sell’ as before when considering the alternatives.