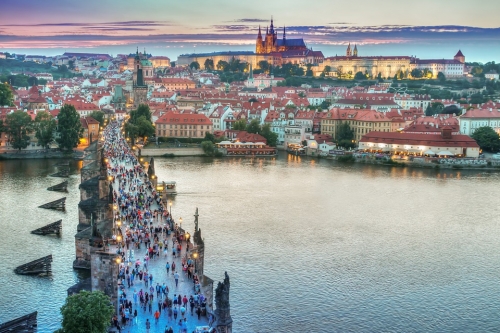 Not every expat is eager to move once and then stay put. There are expats who are constantly looking for their next destination. The rich, varied influences from different places are what constitute their expat lives. Experiences are what these expats are looking for. Yet there are so many questions that are to be answered before deciding on the next destination.The European Union, with all its charms, is on the bucket list of most travelers. Most countries in this region are developed and modernized too, which makes a strong case for expatriates. So what experiences does a place like the Czech Republic have to offer? Does Prague put up a strong case for being your next neighborhood? Let’s find out.

The Czech Republic is a country in Central Europe. Surrounded by Germany to the west, Slovakia to the east, Austria to the south, and Poland to the northeast, the Czech Republic covers an expanse of 78,866 square kilometres.

Prague is the largest city and also the capital of Czech Republic. It is situated on the Vltava river in the northwestern part of the Czech Republic. The population of this city is around 1.4 million. Around 2.2 million people are residents of the larger urban zone. 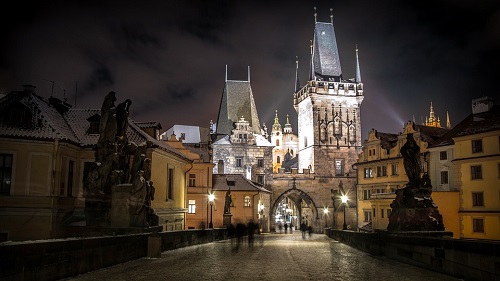 Prague is equally beautiful during the day and at night

The city is also an important centre from the point of view of research. Out of the 54 Czech Academies of Sciences, 39 have their seats in Prague. Prague is also the hub of operations and administration for Galileo – the satellite navigation system being worked on by the European Union. Often called the “Golden City”, Prague is considered one of the best cities to live in.

Here are nine things that make Prague perfect as your next expat destination.

Since its foundation by the Roman empire, Prague has been an important city. A political and cultural mecca, Prague has witnessed the Gothic, Renaissance and Baroque eras – which is mirrored in the city’s multi-styled architecture. The city was the capital of the Bohemian kingdom and the residence of several Roman monarchs.

The city of Prague was actively involved in the Bohemian and Protestant Reformation and the two world wars. Prague has also been an active ground for the communist regime. These historical incidents have left their mark on the city’s walls and cobbled streets.

Prague’s various cultural attractions have withstood the tumultuous events of 20th century Europe. Some of the common cultural attractions include Prague Castle, the astronomical clock at Old Town Square, the Charles Bridge, the Jewish Quarter, Vyšehrad and Petřín hill. Owing to its cultural significance, UNESCO declared Prague a world heritage site in 1992.

Prague’s tryst with history can be understood by the fact that Prague boasts nine major museums inside the city limits. These include:

Known for its beauty, Prague offers breathtaking views throughout the year. Nicknamed “the city of a hundred spires”, Prague is actually home to thousands of beautiful towers and spires. The observation deck at Old Town Hall offers a brilliant view of the ancient city’s rooftops. Atop Vtikov Hill stands a majestic statue of Jan Žižka, a former military leader, with the panorama of the entire Prague Castle visible in the early evenings which makes for a delightful scene. 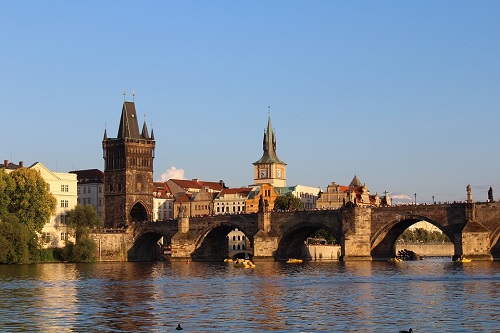 Walking along the river lets you take in some picturesque views

Prague also boasts of over two hundred historic gardens and parks. With the oldest of them built in the Middle Ages, these parks offer picturesque oases in the city. The city gardens can be distinctly separated on a timeline – each having the architecture and art carvings according to the period. The Palace Gardens below Prague Castle, Wallenstein Gardens and the Petřín Hill gardens are must-visits for expats travelling to Prague.

Walking into Prague is like taking a step back in time. Having undergone centuries of diverse economic, social and cultural change, each period has left a mark on the cityscape. The architectural splendor of the city is reflected in its tall spires and cobbled streets. Very rarely will you find a blend of Romanesque chapels and cellars, Baroque palaces and gardens, Gothic cathedrals, worldly Art Nouveau buildings, and unique Cubist architecture within a stone’s throw of each other. You don’t have to be an ardent fan of architecture to appreciate the diversity of buildings in Prague. Some of the architectural marvels include: the Rotunda of St. Martin, the Wallenstein Palace, the Cathedral of Our Lady before Týn, and the Municipal House. A walk down the cobbled footsteps sipping on a hot beverage is truly an experience one will cherish.

The city of Prague experiences a temperate, continental climate with a few currents of Oceanic climate coming in. Winters are extremely cold and snowy while summers are warm. This drastic difference in temperature is due to the city’s landlocked location. During the months of November to March, snow is a common phenomenon. Summers are usually sunny with temperatures reaching an average high of 24 degree Celsius. Winters are dry while summers can bring heavy rain with thunderstorms. Some summer nights are cool too. The temperate nature of the climate is easy to adjust to for most expats. Even the snowy winters make the town so picturesque that the atmosphere makes up for the chilly winds.

Flowing through the middle of Prague, the Vltava river is the source around which the city gradually expanded over a thousand years. It is the longest river in the Czech Republic, flowing across 434 kms. The river provided drinking water and crop cultivation. It was also the fastest way of moving things around the settlement. This established settlements along the crossing, which was a frequent junction of travellers between Northern and Southern Europe. 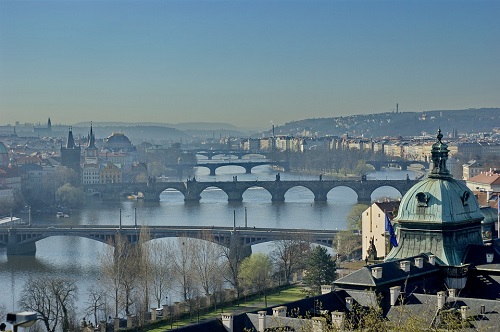 The river stretches along the whole city

The astounding views of Old Town and New Town – Staré Město and Nové Město respectively – on one side of the river capture the true essence of Prague. The famous Prague Castle lies on the other side of the water, standing tall alongside the Lesser Town (Malá Strana). At the heart of the city lies Charles Bridge, arching the river which flows through Prague. The panorama of the river meandering its way through the historic landscape is a spectacle that can be enjoyed from the Charles bridge. You can take a walk across the bridge or take a cruise through the river below. The focal point on the bridge allows a view right up to the hills of Petrin. There are a lot of restaurants along the banks of the river that are perfect for dining on a romantic night out.

Even flowing through the city, the river breaks the monotony with birds swooping down on the water for food. Since the flow of the river is strong in some places, it is also used to power industries. There are eight dams and a large canal built on the river along the Mělník-Prague-Slapy stretch to make it easier to navigate the waters.

The Czech Republic is a developed country with a high functioning economy. The GDP per capita rate is approximately 87% of the average European Union rate per capita. About ¼ of the country’s GDP is accounted for by Prague’s economy. With a growth rate that is 172% if the European Union average, Prague is the 5th highest-performing European NUTS two-level region. A large number of international corporations have their European headquarters in Prague, making it a strong contender for expats looking for work.

About 20% of the country’s workforce is employed in Prague. Wages are above global averages too. Expats make up 18% of Prague’s workforce. The main industries are pharmaceuticals, food processing, printing, manufacture of transport equipment, and electrical engineering. In the 90s, service-oriented corporations replaced industries as the dominant part of the city’s economy. Trade, financial and commercial services, dining and hospitality, and public administration are creating more jobs in the service sector. This sector accounts for about 80% of employment in Prague. Tourism is another major source of employment. Prague accounts for 50% of the national income from tourism. Due to its natural beauty and astounding architecture, the city has been a buzzing location for international movies. 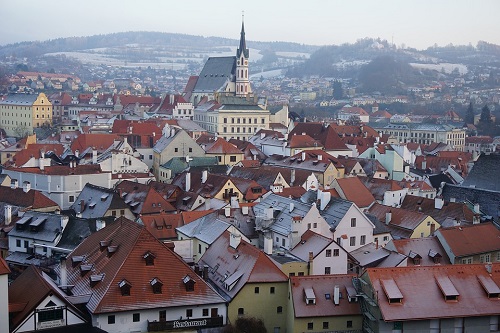 The dreamy rooftops of Prague are a sight to behold

A 2010 survey ranked Prague as the best city for business. It is among the top three cities in Eastern and Central Europe, according to The Economist’s livability rankings.

Because of the city’s strong economy, Prague boasts world class amenities. An added plus about Prague being its small size, almost all amenities are within close range of the residence zones. Add that to Prague’s excellent transport network and we have the perfect expat experience. Public transportation is widely used, with more than 1.2 billion passengers in total every year. Prague’s Metro has 3 lines – A, B, and C – and the length is more than 60 kms. The Prague Tram System is still popularly used and is one of the largest in the world. With over 356 million passengers annually, this is the second most used tram system after Budapest. The high usage of public transport means that expats can get around easily. Trams, buses and the metro are all run by the Prague Public Transport Company. This saves the hassle of having to arrange for private transport to move around the city.

Despite its high standards, the cost of living is comparatively less than many other global cities. This makes Prague a very lucrative option for expats looking to make a living in Europe. Renting a 3-bedroom flat in the suburbs will cost around 600 Euros per month while a studio apartment in the suburbs costs about 350 Euros. Rent prices are about 62% of Berlin, 55% of Brussels and just 42% of Amsterdam.

Expat life in Prague is exciting and full of adventure. The city is lined with hundreds of concert halls, cinemas and galleries. Did you know that Mozart composed his final opera – Don Giovanni – along the banks of the river Vltava? 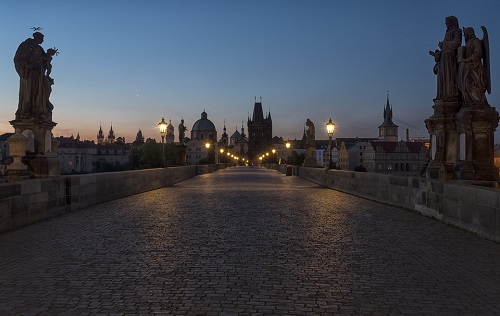 Just wandering around the cobblestone streets makes for a pleasant evening

Music clubs throng the city, making it a popular hub for young expats. Like the famous composer, the city has inspired many young artists and scientific minds through the centuries. The Prague Spring International Music Festival, the Prague International Jazz Festival, and the Prague Autumn International music festival are some of the popular grand music festivals that take place every year in the city, which witnesses thousands of music enthusiasts making a beeline to these marvelous music events.

Film festivals like the Febiofest, Echoes of the Karlovy Vary International Film Festival and the One World Film Festival also see large crowds thronging the venues.

There are lot of fun activities for expats visiting Prague with family. A steamship goes to the Prague zoo from the city centre. The Prague Zoo itself is considered one of the most splendid zoos in the world. Prague Castle houses a Toy Museum which is a treat to the eyes. The display of science and technological inventions including the first motorcycles and airplanes, steam locomotives and early automobiles is another fascinating thing to see.

The beauty and grandeur of the city along with the amazing quality of life that it offers makes Prague a great destination for expatriates. The low cost of living, abundance of amenities and all the comforts of a luxurious life are by themselves enough to entice most expats. The breathtaking views of the cityscape and the cobbled walkways are just the icing on the cake. So go and explore these alleys and travel through time as you hold a business meeting in a wooded cottage overlooking the banks of the Vlatac.

Have you lived in Prague? Share your experiences in the comments below, or answer the questions here to be featured in an interview!