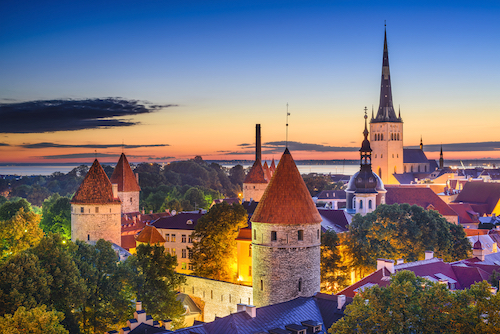 On January 1, 2011 Estonia joined the European Union and adopted the euro as its national currency. Previous to that, from 1928 to 1940 and then again from 1992 to 2011, the Estonian currency was the kroon. At the time, the exchange rate was 15.65 Estonian kroon to one euro. During the transition, prices for everyday necessities went up and have been on a slow but steady increase ever since. Although prices have gone up, the capital city of Tallinn is still cheaper than most other European capitals. However, it’s not quite the cheapest of the bunch. The current cost of living in Tallinn is 51 percent less than in London (United Kingdom), but 10 percent more expensive than in Vilnius (Lithuania) and a whopping 29 percent more expensive than in St Petersburg (Russia).In order to live in Tallinn comfortably, you will require a salary of between €1000 to €1500 per month, depending on your lifestyle. The minimum wage in the country is €600 per month, while the average is €1,224. This is a 6.5 percent increase from 2016. Basic, everyday items are on par or cheaper than in most European capitals, but branded items are more expensive.

If you’re living in a two-person household in Estonia, here are the costs you can expect to shell out.

The cheapest two-bedroom flat for sale in Tallinn is €33,000, while the most expensive is €599,000. You can find cheaper flats if you venture further from the capital. City24 is one of the best websites to check out the local property or land for sale or rent.

You can expect to spend around €80-90 on food each week. Check out current prices at the local mid-range supermarkets, shops that are similar to Tesco, via Rimi and PrismaMarket.

The average price of good quality beer is around €1.36 per half litre. A pack of cigarettes costs anywhere between €4 and €7.

Membership of a private sports clubs will be between €12 and €70 per month, depending on the type club and membership package.

Utilities range from around €80 per month in summer to €110 per month in winter. Please be advised that unless you live in a private house or your apartment block has its own boiler room, the heating will be turned on in winter and is completely off during the summer months.

Tickets for the local cinema will cost you €5.10 for a child and €8.70 for an adult. A trip to the theatre for two people will cost between €30 and €45 depending on where you choose to sit.

Current fuel costs are €1.38 per litre for petrol and €1.40 for diesel. A new mid-range car (such as a VW Golf 1.4 TSi with no extras) will set you back somewhere in the region of €18,500. Public transport for local residents in Tallinn is free.

A night out on the town is hard to put a price tag on as it depends purely on the amount of much money you are willing to part with. A budget-friendly meal out for two will cost you somewhere in the region of €20.

Eight Mbps of internet will cost €16 per month. The cheapest mobile phone deal available is €10 per month.

Full-time, private kindergarten will cost around €312 per month.

The average cost of student accommodation in Tallinn is between €200 and €350. Students can find a relevant and detailed price list on this university website.