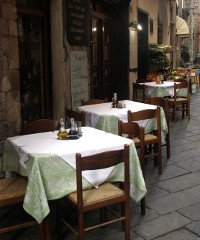 In recent years, Italy has seemed to outside observers like a country in constant, chaotic flux, with the recent governmental transition being major proof of this. The recent chaotic general election in the country, which generated no fewer than five inconclusive ballots, finally ended on April 20 with the re-election of Giorgio Napolitano.

However, it is not the indecisiveness and / or apathy of the electorate which is the problem, so much as the economic situation which may be exacerbated by lack of confidence in whatever governmental coalition Napolitano manages to form. The Economist reports that the country is staring down a debt of €2 trillion, prompting worries throughout the continent of a here-we-go-again bailout plan similar to those affecting Greece and Cyprus.Changes in the Political Landscape

In this jittery new landscape, one of the major political players is the Movimento 5 Stelle [‘Five Stars Movement,’ hereinafter M5S], a populist / libertarian party fronted by the comedian Beppe Grillo and focusing on governmental corruption and ‘Eurosceptic’ issues (one out of four eligible Italian voters rallied behind the M5S in a clear rebuke of the political style associated with Silvio Berlusconi).

They are widely seen as an anti-establishment force, and so it comes as no surprise that no M5S members were named to the cabinet of new Prime Minister Enrico Letta. Something that may be of more interest to prospective foreign residents is the cause that the M5S represents: it is also an “anti-austerity” party, and the very mention of the consideration of “austerity measures” is typically an indication that one’s economy has seen better days.

A sizable number of Italian residents would likely agree that it has – the country’s unemployment rate, though nowhere near the troubling level that gave birth to Spain’s indignado youth protest movement, is still 11.7%, and the debt mentioned above stands at 126% of the gross domestic product. However, some economic indicators point to positive trends in spite of all this: the output of Italian industry recently exceeded the market expectations of a contraction, with a long-term expansion expected to overcome a similar contraction for the year 2013.

In the month of April, consumer confidence also rose in a slow-but-sure manner, while inflation managed to reach its lowest numbers since the spring of 2010. Lastly, the unemployment numbers mentioned above have been reduced in certain areas of the country from far more drastic ones: both the regions of Sicily and Campania could claim, a few years back, to have over a quarter of their residents unemployed, which is not the case now.

There are, however, some issues that might be of interest to foreign transplants and investors. They may not relate to the last few years or months of economic development, but are all the more relevant for their likelihood of being long-term fixtures of the local economy. High personal income tax, for one, is a fact of Italian life that will grate upon many high-income professionals: though it is nowhere near the 75% income tax imposition decreed by Francois Hollande for French earners of million-Euro incomes or greater, it is still approaching the 50% rate, which many entrepreneurs and business owners will still find untenable.

Owing to this, many property owners in Italy elect to keep their savings in an offshore account or home account to avoid taxation, e.g. in well-known havens such as the Channel Islands. Self-employed workers in Italy, provided they work in the country for 183 days or longer, can expect to pay a 10% social security tax on earned income. New arrivals from countries other than the U.K. or U.S. will certainly want to find out if their nation has a “double taxation treaty” with Italy preventing the unenviable situation of having income taxed in both Italy and their country of origin. Though these treaties are in place for the aforementioned countries, there is no guarantee for other nations.

Purveyors of doom and gloom relating to the Italian economy might do well to remember how resilient the country has been throughout the 20th and 21st centuries. From the 1950s to the 1960s, for example, the country transformed from one in which half of Italian homes lacked running water into a country featuring many of the same amenities found in North America. The subsequent decade-plus of homegrown terrorism known as the “years of lead” seems to have only increased the resolve of Italian industriousness – as one critic notes, “the ultimate paradox of Red Brigadism is that it left the capitalist establishment stronger than ever.” Given how severe that epidemic was considered by Italian citizens, there is reason to hope that the latest crisis will pass without the current worst-case scenarios for the ‘Eurozone’ being realized.