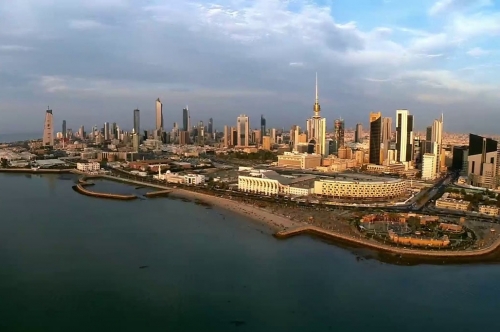 Kuwait has always been a popular destination for expats. Rich in oil, the emirate is economically prosperous and offers lucrative career prospects to expats. In fact, the economy is one of the prime reasons why foreigners move to Kuwait. Its economic prosperity depends on the oil industry, and oil products make up almost 50 percent of the country’s GDP. They also constitute over 90 percent of the government’s income. With the increase in oil prices in 2010–2012, government spending accelerated, along with economic growth. But the fall in prices in 2015 paved the way for a budget deficit for the first time in sixteen years.Even though Kuwait is an Islamic nation, its culture bears considerable western influences. It is not as orthodox as its neighbor, Saudi Arabia. However, expats are expected to be respectful of traditions, such as dressing modestly and avoiding public displays of affection.

Kuwait’s present political system is referred to as a constitutional monarchy where the hereditary position of Emir is the head of state and possesses significant powers. It also has the oldest directly elected parliament among the Arab nations in the Persian Gulf. Kuwait introduced voting rights for women in 2005. Expats considering a move to Kuwait may have concerns about the political atmosphere, with the increase in uprisings that rocked the Arab region recently. While there were some protests in Kuwait, which were directed at the struggle against corruption and the call for political reforms, the demand for the prime minister’s resignation was unsuccessful.

The official language of Kuwait is Arabic, but English is commonly spoken throughout the country, making it easy to communicate with locals. It is also the language in which business is carried out.

A large number of expats moving to Kuwait go there to work in the oil industry. The country’s financial sector has also been growing considerably in recent times and there are jobs available in fields such as sales, marketing and business development. However, the government has been restricting the number of overseas residents living and working in Kuwait, and in recent years good relocation packages have not been very easy to obtain, as the advantage is being given to the locals. There is also a new law that bars expats over the age of 50 from being employed in the public sector. But the expat population continues to grow. More than 80% of the workforce in Kuwait consists of expats.

Living in Kuwait is largely safe. A few governments do issue warnings to their nationals about travelling to Kuwait due to a terrorism threat against overseas, mainly western, corporations. But no such incidents have occurred and hence there is little reason for expats to be concerned. 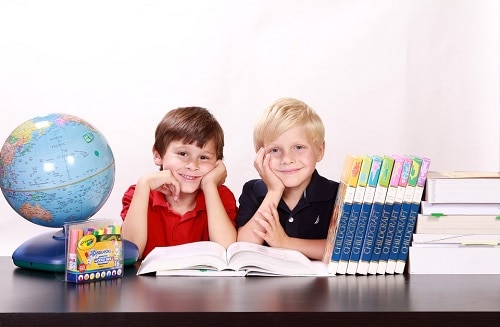 The standard of education in Kuwait is high
© White77 on Pixabay

Expat parents will find that the education system in Kuwait adheres to high standards. With the income received from oil product sales, the government has been able to improve the public school system and also create an extensive social security system. Most expats prefer to send their children to international schools, which are also reputed in Kuwait. However, the waiting lists at these schools are long and it is advisable to send in applications well in advance.

The government provides generous benefits to Kuwaiti citizens in the form of free healthcare, guaranteed housing and free public education. Expats are not entitled to such benefits. But they do have access to private medical facilities, which also meet high standards.

New expats in Kuwait may be subjected to some amount of culture shock. But Kuwait is a modern country and it will be easy for expats to make the necessary adjustments in order to begin enjoying the benefits of the luxurious expat life.

Here are ten things for expats to see and do in Kuwait.

This is sometimes referred to as the home of the royal family. However, Kuwait’s monarch and the government do not use this palace a great deal. Even the royal household live at Bayan Palace, which is the official home of the Emir, and also where the monarch meets with dignitaries.

Seif Palace stands opposite the Grand Mosque and is best known for its blue tiled watchtower with a roof of pure gold plating. It was built by Sheikh Mubarak in 1896 and attracts thousands of visitors each year. The palace serves as an excellent example of Islamic architecture with its mosaic tile work, and includes an artificial lake, a dock for yachts, and a landing field for helicopters.

There is an air of secrecy surrounding the palace and visitors are not allowed to take pictures. No one is allowed to go near the entrance, although the gardens are open to visitors.

A great place for expats to lose themselves in is the Tareq Rajab Museum, a small-scale museum which was originally opened by Taraq Sayed Rajab and his wife, Jehan Wellborne, in the 1980s. It is located in the basement of a large villa.

Some of the displays include musical instruments suspended in glass cabinets, a variety of headdresses, costumes belonging to princesses, pearls from Bahrain and silver and gold jewelry from Oman. These displays are awe-inspiring in themselves, but perhaps the main attraction of the Tareq Rajab Museum is the Arabic manuscripts housed in the Calligraphy Museum.

The museum is located in Jabriya, close to the intersection of the Fahaheel Expressway and the Fifth Ring Motorway. The building does not bear a sign, but it can be identified by its carved wooden doorway, with two smaller doors on either side.

The old souq is located in Kuwait City and has been preserved in all its glory. Before oil was discovered in the region, the souq was used as an important trading hub. The market, which suffered damage during Iraq’s invasion in 1990, has been in existence for almost 200 years. 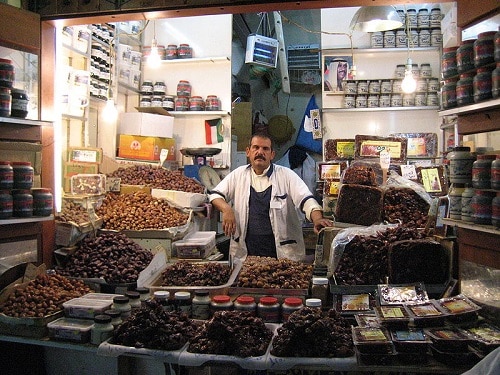 Visit the many stalls in the souq
© Trammell Hudson on Wikipedia

This is a great place to spend a few hours. There are a number of snack shops around the outer part of the souq, which offer samples of many traditional delicacies.

Within the souq, there is the smaller Souq Al Hareem: a covered space where Bedouin women, seated upon velvet cushions, sell their wares such as kohl and jewelry. Expats will be able to find some good bargains on traditional items such as musk perfumes, silken Persian carpets and Arab antiques.

Housed within the souq are two small museums; the first Islamic pharmacy in the country and the Sheikh Mubarak Kiosk.

Here is where expats have an opportunity to view a collection of scale model dhows, a type of sailing vessel.

The museum is located in Salwa, beside the Radisson Blu Hotel. Part of the collection is the mammoth Al Hashemi II, a large wooden dhow, which is the largest wooden boat in the world. The boat is used for various purposes such as hosting receptions, conferences and meetings, and even has a grand ballroom.

The marine museum showcases Kuwait’s history of ancestral shipbuilding through photographs of the construction of the Hashemi. Visitors can also view the tools used in the process of shipbuilding.

Failaka Island is an island located 20km off the coast of Kuwait City, in the Persian Gulf. The name comes from an ancient Greek word, which means ‘outpost’. The island was inhabited as far back as the Stone Age and is an ideal spot for those who love ancient history.

An ancient trading port, the island showcases many old dhows. There is also a Greek temple and other important archaeological sites to explore.

The ecosystem in Failaka Island is different to that in the rest of the country. Springtime is especially striking on the island due to the changing temperature. The few local inhabitants of the island are called Failakawans and have been living there since before the Iraqi invasion in 1990. Prior to the invasion, nearly 2000 residents called the island their home, but were forced to flee when the invasion occurred. Many of the buildings still bear bullet holes.

The Kuwait Towers were designed by a Swedish architectural company and opened in 1979. They serve as an unofficial symbol of the country. This collection of three towers appears on almost everything in the country, including currency notes.

The largest tower stands at a height of 187m and has a two level revolving viewing deck, along with a café and a souvenir shop. The second tower is used as a water reservoir, while the third tower is used to store equipment that lights up the two larger towers and supplies electricity for certain areas of the city. 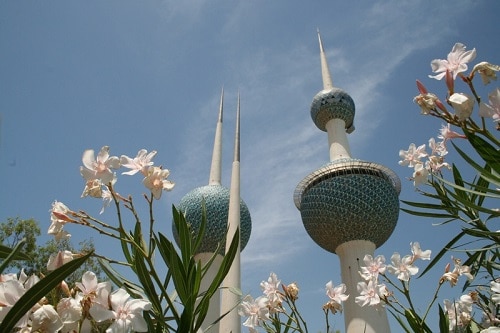 Kuwait's towers are its most famous landmarks
© snapr on Flickr

Kuwait Towers epitomize Kuwait’s economic growth and are a cultural and tourist landmark. Expats can also visit the restaurant, which has a menu that changes every day.

The towers look especially striking at night when they are illuminated. The aesthetic of the towers is reminiscent of traditional Islamic design combined with modern architecture.

A telecommunications tower in Kuwait City, the Liberation Tower is the tallest building in the country. It rises to a height of 372m and is thought to be the fifth tallest communications tower in the globe. Construction began before the invasion and the tower received its name when it was completed in 1993, as a symbol of Kuwaiti liberation.

The late Kuwaiti Emir, Sheikh Jaber Al-Ahmad Al-Jaber Al-Sabah, unveiled the tower in 1996. Liberation Tower is 40 meters taller than the Eiffel Tower. There are 18 elevators in all and these are known to be the fastest in the world. It even has a revolving mezzanine observatory and six floors of office space.

Expats moving to Kuwait will be happy to know that the country has far more to offer than oil, dessert and dates. It is also one of the largest boating markets for leisure boats in the Gulf region. There could be an estimated 15,000 registered leisure boats, according to numbers from the government in Kuwait.

It is common to see boats parked next to cars in many of the villas in Kuwait. Beautiful boats can also be seen docked at the many marinas in the country. Taking a boat trip is one of the best ways to escape the summer heat. There are a variety of companies that offer fishing excursions and boating trips. A sailing or power boating trip is a great way to catch some stunning glimpses of Kuwait’s desert landscape.

Another great pastime for expats in Kuwait is a shopping trip to the country’s Friday Market, called Souq Al Juma. It is open on weekends and is located in one of the main industrial areas in Kuwait, called Shuwaikh.

This large, open-air market is one of the oldest and most popular markets in Kuwait. Some of the wares sold at the market include furniture, perfumes, crockery, antiques, toys and industrial tools. It is also a good place to shop for traditional Iranian and Pakistani antiques. Evenings can get especially crowded, as this is when the weather cools down.

For a more upscale shopping experience, expats can visit the Avenues mall in the Al-Rai area. The mall houses more than 200 local and international brands, and attracts thousands of visitors.

The eco-friendly architecture of the mall is aimed at optimizing natural light and saving the national energy. It has a glass roof that allows sunlight to enter, lending a feeling of outdoor space. 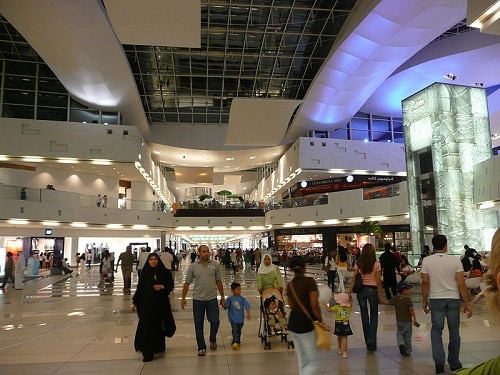 It is the largest mall in Kuwait and opened in 2007. Ever since, the mall has continued to develop in order to improve the shopping experience. It spans over 7 districts and has more than 800 stores. The design of the mall mimics the natural forms of the desert. Avenues Mall also has 11 screens at the Cinescape Cinema area.

Have you lived in Kuwait? What were your favourite places to visit? Share your thoughts in the comments below, or answer the questions here to be featured in an interview!