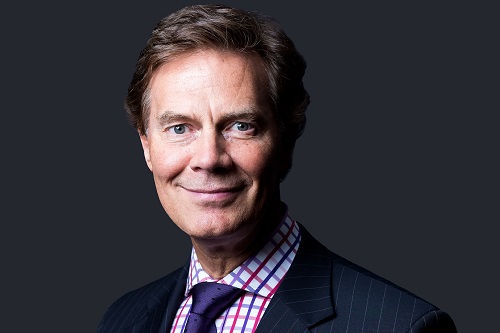 Dennis, how did you first become an expat?

Having finished Boston University School of Management, I decided with a cycling friend to take a tour of Europe by bicycle for the summer of 1980. My friend cancelled at the last minute after months of planning, so I decided to go it alone. This summer trip turned into nearly a year and a half tour that included many Western European countries, Morocco and the UK.The first summer in Southern France, I met a young Dutchman with his best friend on holiday in La Lavandou. He was also a basketballer – I have played bball all my life from the age of 10 – and we quickly became friends. He gave me his telephone number and I pocketed it as he left to return to the Netherlands at the end of his 2-week vacation.

Little did he suspect that, a full year later, I would call him from a telephone cell in Amsterdam to ask if I could perhaps sleep at his house for a day or two since arriving in Holland after several months touring the UK. At that time he still lived at his mother’s house and there was an extra bedroom free. I ended up renting that room for nearly 4 months, working as a chef at a restaurant in the area. I met this young man’s sister during the first week that I was staying there and… we have been happily married now for nearly 35 years!

What does a typical day in your life look like?

The only thing ‘typical’ about my days – and nights – is that they are all very busy. I have my own marketing consultancy company and currently have 2 part time interim assignments that more than fill my week. I am also negotiating with a 3rd group concurrently to take on an additional international business development task.

I am the chairman of the Amsterdam American Business Club, on the Board of the Men’s Society Club ‘de Unie’ (with more than 1100 members and associates), father of 4 children, and proud grandfather of 4 grandchildren. My wife and I sing in several local choirs and we were involved recently in a 6 month opera project nearly every Saturday with performances in 3 different cities. I squeeze in 2 or 3 trips to the gym each week to stay in shape when I can.

I also have a catering business called Dynamic Cooking where I do private dining, cooking workshops and catering. My wife works with me and is my sous chef during larger events. I often work as a demonstration chef doing show cooking for the Magimix kitchen machine company, usually about 10 to 12 Saturdays each year.

In your experience, what are some of the biggest challenges that expats face when living abroad?

I think making new, interesting friends and getting involved in the community are difficult challenges for many new expats. Finding a job is also often a trial, but the market is picking up and many companies are looking for internationals to bring into their teams. If you are home while many people are at work, it can get a little lonely sometimes.

The language is usually not a problem – just about everyone speaks English in some form or other. I do know that it is definitely worth learning Dutch if one is planning to stay more than a year or so. Not an easy language by any means, but understanding the culture, the humour and the Dutch way of thinking is absolutely a plus point for an expat who is trying to assimilate into this way of life.

How does the Amsterdam American Business Club help people to address these challenges?

The AABC organises more than 11 events every year in various, fun locations in Amsterdam. It is a professional networking organisation that, although very American in its ‘look & feel’, is open to all nationalities and business professions. Men, women, young, mature – our meetings are usually about 40 – 45 people either working or looking for work/partnerships that enjoy a drink and a good conversation.

Membership fees are kept low and walk-ins and guests are very welcome for a small fee at the door. We have about 6 to 8 people who are first time participants at nearly every meeting. This gives expats a great opportunity to get out and meet like-minded people in a comfortable, vibrant atmosphere.

What are the most rewarding aspects of your life as an expat?

After being in Europe for so long I feel that I have one foot in the U.S. and one on this continent. It gives me the tremendous advantage of understanding what people think and how they react on both sides of the Big Pond. I feel so grateful to be so centrally located and free to move around between so many different countries at will. I can appreciate a wonderful French wine, a delicious German beer, a mouth-watering Belgian tartare, a sticky sweet British Spotted Dick, all within just hours of my house. I can hear and discuss opinions about the politics of every country in the Western World and beyond, in relative certainly that both sides of the argument are properly conveyed. I can walk down one of the main streets of Amsterdam and be in the midst of people from 30 different countries with all their colour and cacophony or walk quietly through the forest, alone, just an hour away. An enormous sense of freedom.

What advice would you give to American business people new to Amsterdam?

Doing business in the Netherlands is a lot less simple that it may seem at first glance. Despite the fact that the language spoken is English and the relative directness of negotiations is often familiar to Americans in business deals, the Dutch have a very different view of the value of a deal. Trust is very important and the option for return business is, in many cases, completely reliant on the ‘gunfactor’ – “I grant you our business”.

The Dutch place substantial value in consensus decision making. Very pragmatic and with step-by-step planning, senior managers often pull in experts for advice before signing a deal. Be patient and listen closely to your deal partner. Don’t brag about yourself or your solutions – let past results speak for themselves. Emphasize reliability.

Dennis Cowles is Chairman of the Amsterdam American Business Club.