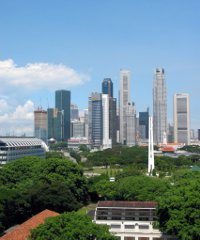 Singapore, the little red dot, has definitely risen up the international ranks in many ways—amongst its accolades includes being one of the world’s most liveable cities, Asia’s most ‘network-ready’ and number one for ease of doing business. It’s also no wonder that the 710 km² island is one of the most expensive cities in the world.

According to the Wall Street Journal, living in this small city costs about 42% than New York – topping London, Frankfurt and Hong Kong. The Economist Intelligence Unit’s annual cost-of-living survey showed that a European city – Zurich – is still the world’s most expensive, with Tokyo as the runner up and Singapore now listed as the world’s 9th most expensive city.One of the most surprising things to many foreigners here is that young people tend to live with their parents till they are married, a marked difference from the independence young people seek in ‘western’ countries. In Singapore, being known as a practical society, children stay with their parents for a very important reason as well—saving on accommodation costs!

Being such a small country, you can imagine the problem one can have when it comes to housing. Already, rising property prices in recent years have been a bone of contention for many Singaporeans with public housing becoming hardly affordable even for locals. So, if you are an expat looking to live in Singapore, the first cause/cost of concern would be your type of accommodation.

The cost of accommodation depends on a number of factors such as proximity to the city centre, type of property and facilities in your dwelling and if you are willing to share the place with someone else.

Most expats choose to rent private condominiums as they provide security access and recreational facilities such as swimming pools and gyms. However, to rent an entire apartment may not be cheap. For instance, a 2-bedroom condominium in the Central Business District (CBD) area can easily cost SGD$5000-$7000 a month.

The cheapest way to stay for a long term in Singapore is probably to stay in a HDB flat. HDB flats are public housing for Singaporeans and are usually close to many facilities such as their own neighbourhood town centres with supermarket, cheap hawker food and public transport. However, these apartments do not come with luxurious facilities like private gyms, BBQ pits and a swimming pool. Rental costs for HDB units depend on the location’s proximity to town and the size of the unit. A 3-bedroom HDB flat close to the CBD may cost around S$3,000 while at other suburban locations the cost may range from S$2,200 to S$2,700. You may of course opt to rent just a HDB room but you may then be restricted from cooking in the kitchen and this option is often taken up by foreign skilled workers rather than white-collar professionals. Rental can be as cheap as $450 a room in the suburbs to $1000 in a more central district.

Before renting, do note if the lease includes utility bills and internet charges. These usually are included but if not, try to set aside around $300 for this every month.

Food is relatively cheap in Singapore and you can find cheap food in hawker centres and food courts. Sometimes, it may even be cheaper to eat out compared to cooking on your own! A plate of ‘economic rice’—rice with portions of dishes you can choose from—ranges from $3 to $5 on average. Just to give you an idea, a Macdonald’s meal costs about $7 in Singapore, more expensive than your hawker fare! Singapore is a food paradise and you can find cheap food or go gastronomic depending on your budget.

Similar to food, public transportation in Singapore is relatively cheap. You have the choice of taking buses, Mass Rapid Transport (MRT) or taxis. Daily costs of transport on the first 2 options range from about $1 to $2 per trip. Taking a cab is also considered affordable if you compare it to the exorbitant prices in European countries. Taxi fares start at around $3 and if you travel from the west (Jurong) of Singapore to the airport in the east, it can cost around $25 to $30 on average.

If you want the convenience of having your own car, be warned – the price of a small car here is extremely expensive due to heavy government taxes. The most expensive component is the Certificate of Entitlement (COE) which enables you to own a vehicle for 10 years. The latest figure published in Jan 2013 sees potential car-owners with less than 1600cc charged a whopping $92,100 for a COE! You can always try to rent a car at around $500-$800 per week depending on the type of car. However, it may be more sensible to save that money and take public transport instead, even if that means a cab.

With a little planning, the cost of living in Singapore – while not cheap – can be affordable.