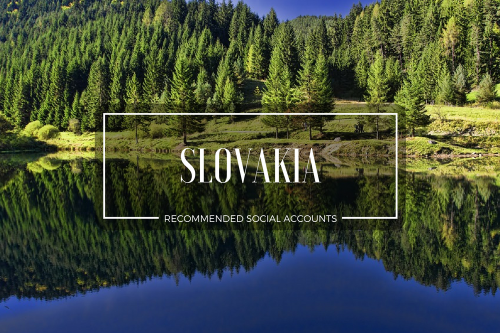 At Expat Focus, we like to be on the lookout for resources around the web that could help prospective expats adjust to their new countries. Today, we’re taking a look at Slovakia and some of the social media accounts you should be following if you’re thinking of moving there.ExpatSk
Facebook Page | Twitter | Instagram

Having made the sharing of useful articles about living in Slovakia (specifically focused on Bratislava) their main goal, this is an incredibly useful set of platforms to follow with updates – or to simply peruse their thorough website at leisure. The author has lived in the Slovak capital city for over 6 years, and has definitely earned their wisdom.

This public Facebook group is a welcoming community of expats who share their everyday tips and tricks with fellow expats living in Slovakia. With topics ranging from how to find everyday household objects to jobs and fun events for meeting like-minded individuals, this is a must join for new and experienced expats.

Gina is a mom, wife, expat and blogger from Romania who moved with her husband and started their family in Bratislava. Her blog is a window onto the real issues and celebrations of expat life – she began writing it to give an insight of what is like to be an expat as a mom, wife, but mostly a woman in a new culture. Her posts are very conversational in tone, making it seem like she is having a warm conversation with the reader.

Though one of the more intimate expat groups, this community really focuses on a key element of life – accommodation. The online face of a residential property company, it does afford expats a one stop shop to compare and contrast the available homes available to buy, or with landlords who like to rent to international tenants.

Born and raised in Athens, Greece, the wanderlust is strong in this polyglot – having lived, studied and worked in 8 countries he is currently making his home in the central cities of Slovakia. He has an interesting take on living in such a different culture to his own – and posts make for interesting reading for expats settled into Slovakian life or just arrived.

Welcoming any expats living in Slovakia (as opposed to people pretending to and companies who just want to advertise on the friendly forum) this is a popular group of closely knit international citizens. Focusing on the east of the country (hence the group name) it is especially good for those commuting to Austria, Hungary and the Czech Republic for work – which is relatively common as they are only an hour or so away on the train network.

This isn’t an Instagram pastiche – all pastels and perfectly manicured images – but a blog and media platforms sharing William’s real experiences as a Dutch man living in Bratislava. With R-18 themes, thought-provoking subjects and a refreshing honesty, it makes for a fascinating insight to the darker side of life. Definitely one for book lovers.

Set up specifically for the American expats who have made their home in the beautiful countries of Austria and Slovakia, this tightly-knit private Facebook group is for celebrating the unique joys of European life as well as traditions brought over the Atlantic Ocean. From celebrating US holidays to introducing Slovak/Austrian heritage into their expat homes, this closed Facebook group is welcoming and full of spirit.

Author and all round lovely fellow Luke is a travel writer by profession, having learned that a traditional 9-5 office job wasn’t something he wanted to spend his life doing. Having travelled around the world, he set up this blog to share the joys and hidden gems of Slovakia. Feeling that the country is sadly missed from the tourist radar, his social media accounts and blog are a wonderful resource for travellers and expats alike.

Though sadly no longer updating their Facebook page with all of the national events, there is a Facebook group and Twitter account where information is shared by the Daily Slovak News team – and it is an essential resource for English speaking expats. They report on a variety of topics and share news from sister companies across Central Europe.

We’re always on the lookout for more accounts to feature – if you write about living in Slovakia on social media, leave us a link in the comments and we’ll take a look!