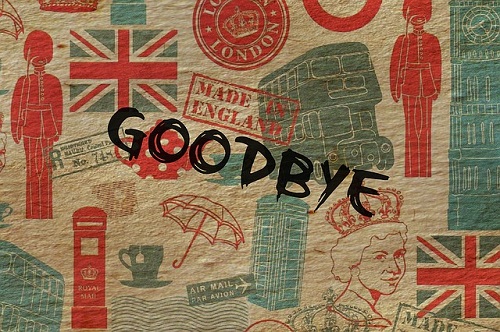 There are two pension issues (state pensions rather than occupational pensions) that I come across frequently when talking to people living in the EU about the implications that Brexit may have. The first is Pensioner Rights for working people, and the second is the potential ‘freezing’ of the UK state pension.Pensioner Rights

With most EU countries state pensions are earned (they are a right, and not a benefit) based on the number of years of contributions made to the social security system in each EU country.

In today’s mobile world, and free movement of labour throughout the EU, there are a significant number of people who have acquired state pension rights in more than one country – for example, Sally worked 8 years in the UK, got married and emigrated to Spain where she has worked for 12 years. In total, she has state pension contributions of 20 years, and therefore she qualifies for a state pension in both the UK and Spain since the 20 years of contributions she has made is more than the minimum in the UK (10 years) and Spain (15 years).

How much Sally will receive may be calculated differently in each country depending on both the consolidated number of years of contributions made across all EU countries as well as the number of years’ contribution Sally has made in each EU country.

Her weekly UK state pension (based on today’s rates), is calculated as 8/35 x £119.31 = £27.27, since the consolidated number of Sally’s contribution years throughout the EU is 20 (even though she only has 8 years’ contributions in the UK and the minimum is 10 years).

In Spain, it is slightly more complicated, since Sally’s Spanish pension is calculated using several different amounts – the ‘EU equivalent amount’ and the ‘national amount’, and Sally will receive the higher of the two amounts.

The ‘EU equivalent amount’ is calculated by consolidating the number of years’ contributions Sally has made throughout the EU (8 years + 12 years = 20 years) – this is called the ‘theoretical amount’. This amount is then pro-rated based on the number of years Sally has worked in Spain (12 years / 20 years), and this is called the ‘pro-rated amount’, so if the full state pension in Spain is worth €1,200 per month, then the ‘pro-rated amount’ would be €720 per month.

The ‘national pension’ (also known as the ‘independent benefit’) is calculated based on Sally’s contributions in Spain (alone). Since Sally has worked for 12 years in Spain, she does not qualify for a Spanish state pension based on her years of contributing in Spain, since the minimum number of qualifying years is 15, and Sally only has 12 years. Sally will get £109 [£27.27 x 4) every four weeks from the UK and €720 per month from Spain.

However, all of this may change as part of the Brexit negotiations. In the ‘do nothing’ scenario i.e. there would be nothing specifically in the Brexit negotiations to cover this, then it is a distinct possibility that the UK National Insurance contribution record will not be consolidated with the other periods worked in the EU. So, in Sally’s case, her 8 years worked in the UK is insufficient for her to receive a pension there (since the minimum is 10 years) and her 12 years worked in Spain is insufficient for her to receive a pension there either (since the minimum in Spain is 15 years of contributions). Sally would not qualify for a state pension in either country. It would seem that Sally should keep on working in Spain for another three years, and then at least she would qualify for a Spanish state pension, regardless of what happens with Brexit. Details of how the state pension works in the EU can be found here. 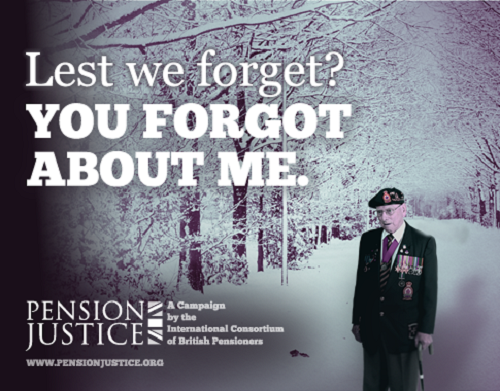 The ICBP sent a Christmas greeting to every UK Member of Parliament featuring Vic Williams (pictured, above). Vic comes from Ontario Canada, and is a war veteran. When asked why he joined the Royal Navy, he said: “because it was the right thing to do”. A few years ago, he made a personal plea (video) to David Cameron asking him to “do the right thing” and end the ‘frozen pension’ policy, but his plea fell on deaf ears. He feels he has been abandoned by his country since his UK state pension is the same today as it was when he first retired.

I use Vic as an illustration of what may happen when the UK leaves the EU, and takes the ‘do nothing’ option (i.e. no specific provision is made within the exit negotiations covering the annual increase to the UK state pension for pensioners living in the EU). If this option is taken, the UK will no longer be ‘legally obliged’ to pay the annual UK State Pension increase to pensioners living in the EU. Over a period of 20 years The Telegraph has estimated that this could leave pensioners £50,000 poorer. The table below shows how Pension Erosion has affected UK pensioners like Vic living in “frozen” countries: 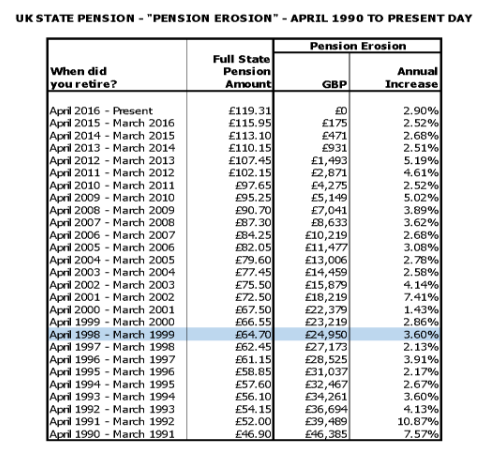 A “frozen” pensioner retiring between April 1998 and March 1999 (the blue line, above) on a “full” UK State Pension (i.e. with the maximum number of contribution years) will be £25,000 poorer compared to their peers living in the UK. Today, the UK state pension is nearly twice what it was in 1998 so the figure reported in The Telegraph would seem to be accurate. To put this into context, there are 85,000 ‘frozen’ pensioners who are, like Vic aged 85 or over, so, if like Vic they received a full UK state pension, then, collectively, they are more than £2.1 billion poorer because they decided to emigrate. The ICBP is very concerned that this may happen to UK pensioners living in the EU.

The ICBP has been working for years to try and persuade the UK government to end this discriminatory practice of pension ‘freezing’. We are very concerned that the UK government will see the annual increase to the State Pension for pensioners living in the EU as an opportunity to save money as part of the Brexit negotiations. The current cost to annually increase UK state pensions in the EU will be £46.6 million. If you are worried that your UK State Pension will become “frozen”, then go to www.pensionjustice.org/petitions and sign their petition and make your voice heard! We receive our funding from pension lobby groups in Canada and Australia, which is where most of the ‘frozen’ pensioners are currently living. Around 40% of membership fees are used to maintain their presence in the UK media, and keeping this issue in front of Parliamentarians. If you would like to help us with this campaign, please click on www.pensionjustice.org/donate.

As the Brexit negotiations progress we shall be following these two pension issues very closely.

Nigel Nelson is a contributor to Expat Focus, and is the Chairman of the non-profit International Consortium of British Pensioners (ICBP).

Here are his latest thoughts on Brexit and State Pensions in the EU. All views are the ICBP’s and Expat Focus is not held liable in any way.