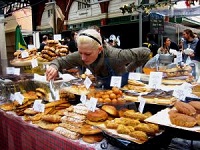 It’s a known fact that living in London can be expensive. But it’s also true that wages in the capital city are higher than they are in other parts of the country. Expats moving to London can keep their costs in check by selecting their accommodation wisely as city center areas tend to be more expensive than other areas. Here is an overview of how much expats can expect to spend once they move to London.

Many expats get their accommodation as part of their employment contract. But for those who have to look for a house on their own, the London Property Watch website is a useful resource.Other websites like Rightmove and Zoopla also have property and price listings. The average estate prices for different parts of the city are available here. There are considerable variations in the costs of buying and renting property depending on the area. Central district housing comes at a high price and hence many choose more affordable accommodation beyond the West End and City limits. Much of the housing demand in the city is for properties priced below £450 a square foot, which means that one-bedroom properties will carry a ceiling price of £250,000. The homes that are currently being built in the south and east areas of the city are seeing great demand in recent times and these are valued at two thirds of those in the city’s prime areas. The rental rates in Central London may amount to a weekly average rate of £1,355. But in areas like Catford in southeast London, the cost is just £317 per week.

The amount you spend on your utility bills will depend on your choice of provider. The size of your home and your daily usage will also determine the costs of power and heating. Gas and electricity prices usually fluctuate and it’s common for people to switch suppliers to avail of better offers. Websites such as uSwitch provide comparisons of the rates and deals on offer by different suppliers of energy, personal finance, insurance and communications services. The monthly cost on average properties of gas can amount to £45 for a one or two-bedroom apartment and £70 for a three or four bedroom one. In the case of electricity and water bills, you can expect to pay approximately £55 and £35 respectively for a one or two-bedroom apartment and £70 and £40 respectively for a three or four bedroom apartment.

Some properties have alternative heating methods such as oil to heat the home and water. These properties have oil tanks located outside the house or in the yard. Oil costs are similar to those of gas and electricity, and should cost about £0.68 – £0.70 per liter.

Food prices have increased in recent years and as a result many people prefer to shop at discount supermarket stores such as Aldi, which are located across London. Internet shopping is also a convenient and economic way to shop for daily essentials.

It’s possible to commute quite easily without a car in London on account of its efficient public transportation system. In fact, having a car can turn out to be expensive due to the high parking costs in the city.

For services such as television, phone and broadband, it makes sense to opt for a ‘bundle’, which will provide a single bill for all these utilities. This way you can also avail of offers such as unlimited Internet usage or some amount of free calls. This turns out to be cost effective that paying for each service separately. Some phone and Internet companies also provide integrated television, where you can get free satellite channels without monthly bills.

Everyone who rents or purchases a property has to pay council tax and this amount depends on the size of your home and its location. The tax collected is spent on local council services like street lighting and also to fund the fire and police services. Single occupants of a property get a 25 percent reduction in the total amount. The City of London website lists the details of council tax. The yearly cost of this tax usually falls between £628.93 and £1572.32.