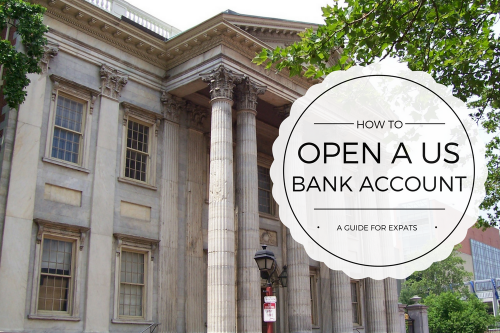 Opening a bank account is not always that straightforward when an expat moves to a new country, especially when the expat has no credit history.

However, it is possible to open a bank account before the expat leaves their home country, particularly if they are in the UK, since many British banks have a big presence in America.Among them are HSBC and Barclays, while American banks are not unknown to British people including Citigroup, JP Morgan Chase and Bank of America so for those who already bank with one of these banks, it should be easier to open an account for use in America.

It should also be appreciated that the required bank doesn’t have a presence in the United States, it will probably have a banking relationship with a US-based bank and so they may be able to help with opening an American bank account.

It’s also worthwhile for the expat to ask their current bank or building society whether they have an offshore banking division and that may be a simpler way to open a bank account for use abroad. It also helps to maintain a banking history and expats should not close their UK bank account because opening a new one when they return is no longer straightforward.

Many banks offer the opportunity of opening an international bank account where the currency is in US dollars and while they are easier to open, particularly for those people who are new or non-resident to the US, the rules and criteria for them will vary greatly between banks.

It should also be understood that international bank accounts have strict requirements that many expats may not be able to meet, for instance they may require that the expat has £50,000 on deposit at any time.

For those expats who do not prepare before embarking to the United States, it is possible to open a bank account in the country and the process is straightforward. They will need to contact the bank they want to be a customer with and arrange a meeting, for which they will be asked to bring several forms of identity including their passport and proof of address, as well as a social security number.

Just to reiterate; while it is generally possible to open a bank account in America when the expat is physically in the country, it is always worthwhile calling ahead to check that they will be willing to open an account.

That’s because the criteria for opening accounts has been tightened and many banks may be unwilling to take on non-US citizens as customers, which can prove frustrating if the expat doesn’t do their homework thoroughly beforehand when contacting potential banks.

On top of this, the criteria for opening a bank account also varies between states so some banks may require more identification for opening an account than other banks will. Many will also insist on a credit history check which is obviously a major stumbling block for an expat who has just arrived in the country though with preparation a credit history file can be transferred and this may help in the bank account opening process.

Also, the nationality of the expat will also be important, particularly if they come from an EU member country, Canada, Australia or the United Kingdom.

Some American banks allow expats to open their bank account online and for this they will still need their social security number and will also have to attend a bank branch in person to physically open the account.

There’s a huge number of banks in the United States, both large and small, and they offer a wide range of services and different types of account. Customers may be charged a fee just for opening an account and the bank may insist that they place a deposit with them once the account is opened.

Most banks in America will have savings and checking accounts but they also offer a special account which is called a money market deposit account (MMDA). This enables an expat to write cheques as well as depositing money; the attraction for opening these is they have a higher rate of interest than other accounts.

The MMDA may also cost more to run with charges, and an expat may need a higher minimum balance before the interest is paid and activity may be limited to six transfers per month.

Obviously, the biggest potential glitch for the expat’s move to America and wanting to open an account is they may not have their social security number for the purpose, but that doesn’t mean it’s impossible to open an account with some banks, particularly those who have a presence around the world.

They will have the opportunity of opening a US bank account at one of their overseas branches and for the customer to transfer money from their current account to their new US dollar account.

Again, the criteria for opening a bank account at an overseas branch vary from bank to bank and also on where the expat lives. They may also have to pay a relatively high administration charge for the privilege.

However, this is a potential headache solved, and as soon as they are given a social security number then they can attend the US branch in person to physically activate the account and be able to withdraw money.

The largest US banks

Because the sheer number of banks operating in America is huge, here’s a quick guide to the four largest ones and what they can offer expats looking for US bank accounts.

The biggest bank in America is JP Morgan Chase, this also the sixth biggest in the world, and with more than 5,000 branches across the States it offers a wide range of accounts including mobile banking, free online banking and a Visa debit card. They also have more than 15,000 ATMs dotted around the country.

For expats looking to study in America, JPMorgan Chase offers special student accounts which can be run free of charge for up to five years for students aged between 17 and 24. The bank also has specialist business banking services for clients starting at $10 a month but for those depositing at least $1,500 the account is free. There are also 500 fee free transactions permitted every month, and a business debit card is issued.

The next largest is Bank of America and it offers expats a basic bank account that has a minimum $12 a month charge, but if the expat is depositing at least $250 every month then the account is free.

While the bank does offer specialist student accounts it also offers all account holders a Visa debit card which also has liability protection so if it’s lost or stolen, or someone uses it to buy goods without permission, then the cash will be refunded.

The Bank of America also offers to business bank accounts, which are tailored to the size of the business and include tailored online banking, which has accounting software included and a free business savings account.

Next on the list is Citibank. Its basic bank account may appeal to expats because there is no requirement for a minimum deposit to be made before it is opened. It also comes with some interesting features, including free tickets to concerts and movies.

While the bank has no specific student account it does have a number of business accounts which include free transactions, better interest rates for a business loan and unplanned overdraft protection.

The fourth largest bank in America is Wells Fargo and their basic bank account charges are $10 a month though this is halved for students who are aged between 17 and 24. The bank offers free online bill payments, online banking as well is mobile banking. Customers also get a Visa debit card.

Like its rivals, Wells Fargo also offers a number of business bank accounts which include free monthly transactions as well as business credit and debit cards and other merchant services.

Internet banking is growing in popularity in Europe, particularly with banks on the high street with a wide range of facilities for clients, and America also has the Bank of Internet USA.

The bank pays interest on an account balance, there are no monthly fees, no overdraft fees and no charges for using an ATM. Expats can apply online to open an account but they will need a valid US address as well as state ID or a US driving licence, and that all-important social security number.

Among the issues that expats need to bear in mind is that most banks in America will require that their customer keeps the account active for at least 90 days. Closing the account early means they will be charged around $25 as an early closure fee.

The other issue expats need to bear in mind is that US banks tend to be expensive for receiving and sending money overseas and, in addition, the expat may also be facing unfavourable exchange rates which adds to the cost of international money transfers.

Expats looking for banking facilities in the USA should also appreciate that with such a huge number of banks to choose from also means that the banking sector in America is very competitive and the number of different accounts that can be opened can lead to confusion.

For those expats who are not intending to live in America for a long period, it may be possible to relocate and not have to open an American bank account and instead use their overseas account.

Finally, before leaving the subject of how an expat can open a bank account in America it is worth mentioning that there are thousands of banks offering checking and savings accounts and many of them will be unknown to expats.

Unfortunately, this means that there are scammers operating on the Internet promising to open a United States bank account for their client and claiming it is a straightforward process but that the client needs to deposit a fairly large sum; these companies and accounts should be avoided because the expat is unlikely to see their money again.

With so many banks to choose from, any non-American resident may be confused about which US account they should set up, so by utilising the services of their current bank provider and by approaching one of the better-known banks, the potential for making an expensive mistake should be avoided.